Welsh forest estate with its own river and ponds up for sale for £3.75million 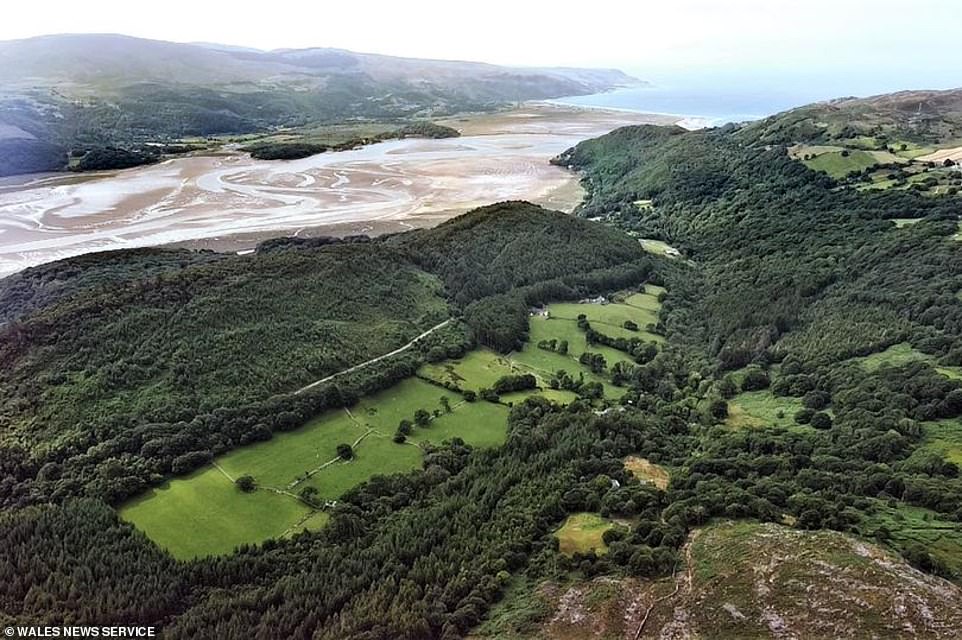 
Country plot is real little gold mine: 500-acre forest estate up for sale for £3.75million comes with its own river, ponds, and 19th century shaft where precious metal was excavated

By Tom Scotson For Mailonline

A 500-acre forest estate is up for sale for £3.75million comes with its own river, ponds and a 19th Century shaft where precious metal was excavated.

The countryside property, which is owned by best-selling wine expert Hugh Johnson, includes the former mine where gold was once treasured.

After being in Mr Johnson’s family for more than 30 years he is now selling Cae Gwian Forestry Estate, North Wales, and wants at least £3.75million for the sale.

A bird’s-eye view of the 500 acre estate in Wales, which is approximately the size of almost three 18-hole golf courses. The estate is on the market for an eye-watering £3.75million

Pictured: An entrance to the old mine which was closed in 1900. In recent years the property has been owned by Mr Johnson’s family for more than 30 years but he is now selling the North Wales forest estate for £3.75million

An old dry stone hut with smoke coming out of the chimney on another beautiful day in North Wales. Owner Mr Johnson described Cae Gwian, the area which the property sites, as having ‘exceptional beauty and charm’

Mr Johnson, who writes the annual Pocket Wine Book, said: ‘In the centre are the remains of a 19th century goldmine (though it produced more copper than gold).

‘Its water supply, the Afon Dwynant, flows through the heart of the property, while the leat that turned the water wheel of the mine supplies water to four old stone cottages scattered through the trees. We rebuilt the old mine office building with its splendid fireplace as our shelter and picnic place.

‘We also made two large ponds; the higher one our tranquil swimming place in the hills. Cae Gwian has not only proved a good investment; it has been our family resort for a generation.’

Located on the Afon Mawddach estuary in Snowdonia National Park, the property has won Royal Welsh awards for its commercial management.

The old goldmine was opened during the 19th Century during the Welsh gold rush’ when prospectors flocked to the area.

Before it was closed down in 1900 the shafts were dug by miners prior to installing and building new railways and a water-powered mill.

But in the last 60 years the forest has been used to produce timber and trees with some of the land which is classed as ancient woodland.

Parts of the old gold mine workings are unused but can still be found in the estate. Before it was closed down in 1900 the shafts were dug by miners prior to installing and building new railways and a water-powered mill

One of the many ‘tranquil’ ponds which the estate boasts. The area and estate is blessed with a special combination of a Snowdonia National Park location and and an outstanding commercial forest

Mr Johnson said: ‘Cae Gwian is an unusual forest of exceptional beauty and charm, stretching over two hill ranges, one overlooking the estuary of the River Mawdach, the higher one overlooking the first, a green valley grazed by sheep between, and beyond the rocky massif of Cader Idris to the south and the Irish Sea to the west.

‘Stone roads give access to the various compartments of the forest and provide magnificent viewpoints; footpaths (two of them public) follow the stream and lead to other viewpoints.’

Mike Tustin, director of sellers Tustins, said: ‘This is a unique opportunity to own a magnificent slice of rural Wales.

‘The special combination of a Snowdonia National Park location and all the ingredients of an outstanding commercial forest should be attractive to those whose desire to own a fast-growing forestry asset.’