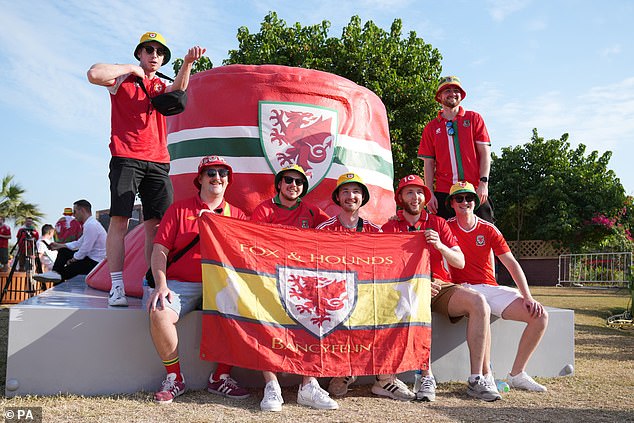 
Scores of Wales fans are set to miss today’s crucial World Cup match against Iran after a ‘glitch in the system’ has seen them turned away at Dubai airport.

At least 80 Welsh fans were told they could not enter Qatar, meaning they missed today’s match in a situation they’ve described as ‘hellish’.

A technical issue with the Hayya card app, which acts as a visa to enter Qatar, has meant the fans are now stranded in Dubai and unable to watch their national team play against Iran today.

Scores of Wales fans are set to miss the crucial World Cup match against Iran after a ‘glitch in the system’ has seen them turned away at Dubai airport. Pictured: Welsh fans in Qatar who have made it into the country and will watch Wales play against Iran

At Dubai airport this morning, a group of 78 Welsh fans were turned away and will miss the match in Qatar, reports BBC Radio Wales.

A number of fans have been staying in neighbouring countries such as Dubai during the World Cup due to Qatar’s alcohol restrictions and how expensive accommodation is in Doha.

They have been travelling into Qatar on shuttle flights, but a number of Welsh fans have now been caught out by a ‘glitch in the system’ that meant their Hayya cards were still ‘pending’.

Fans with a valid match ticket are able to apply for a Matchday Visit Hayya Card, which is a visa permit that allows entry into Qatar for up to 24 hours.

But many fans said they are not being issued in time to board the shuttle flights into Doha.

Welsh fan Hywel Price, from Cardiff, said he was one of 13 friends who were set to miss the match against Iran because they were not allowed to board their flight from Dubai to Qatar due to an issue with their Hayya cards.

At Dubai airport this morning, a group of 78 Welsh fans were turned away and will miss the match in Qatar (file image of the airport)

He said they had no issue travelling to Doha from Dubai for the Wales v USA match on Monday, which ended in a 1-1 draw.

But on Friday, he was told that he was not allowed to board his flight because the Hayya visa card was still pending on the app.

He told BBC Radio Wales: ‘We got up at 02:30 this morning to travel in a taxi to the airport for a 06:30 flight, but when we got there we were told by officials that our Hayya cards had been rejected.

‘It’s hellish – there were 13 of us from Wales on that flight having the same issue, and trying to prove that we had been approved to travel, even though the app still said the permit was pending.

‘People have had emails saying that their cards were valid, only to find when they get to the airport that they have been refused entry’.

The Wales Football Supporters’ Association said on Twitter: ‘Loads (of visas) finally got approved late but this whole process with day permit for Iran game has been difficult for our fans.

‘We have informed Fifa and FAW.’

Meanwhile, scores of Welsh fans are already in Qatar and getting ready to watch their team play against Iran this morning.

A sea of red shirts and bucket hats could be seen on the city’s waterfront on Friday, along with the Urdd Youth Choir and Yma o Hyd singer Dafydd Iwan, with the crowd belting out fan favourites including I Love You Baby, and the Welsh national anthem

A sea of red shirts and bucket hats could be seen on the city’s waterfront on Friday, along with the Urdd Youth Choir and Yma o Hyd singer Dafydd Iwan, with the crowd belting out fan favourites including I Love You Baby, and the Welsh national anthem.

Yesterday, FIFA sought to reassure Welsh supporters that those wearing rainbow-coloured hats and clothing would be allowed into the stadiums.

It comes after Former Wales captain Laura McAllister said she was among female football fans who were ‘told to take off their rainbow bucket hats’ at the Qatari stadium ahead of Wales’ match against USA on Monday.

McAllister, now a professor at Cardiff University, said security guards said her hat was ‘a banned symbol’, however she managed to sneak it through in her handbag.

But FIFA tried to reassure fans yesterday, saying they could wear the rainbow bucket hats in the stadium.

McAllister said today: ‘I was always going to wear my rainbow bucket hat to today’s game, regardless of what we heard back from Fifa, but I’m really pleased we’ve been able to force Fifa’s hand on this.

‘They have heard now that rainbow emblems, whether it’s bucket hats, or laces, or wristbands, will be permitted in the stadium, but of course we were told that before the USA game.

‘I just hope they stick to what has been said, and I can’t see there being any issues unless the Qatari authorities completely ignore FIFA’s directive again.’

Ms McAllister said she has not received an apology over the incident but it has not soured the tournament for her.

She added: ‘This backfired so horribly for Fifa and the Qataris because, at the end of the day, it gave us a platform to talk about LGBT rights.’

All eyes will be on the Iran players and fans to see if they repeat the protests they carried out during their last match against England, which included not singing their national anthem.

The world will also be watching to see if Wales or England players decide to protest over Fifa’s decision to place sporting sanctions on captains who wear the One Love armbands.

The German team made a stand at the start of their head to head with Japan by posing for a picture covering their mouths.

Mr Iwan, who has been vocal in his criticism of the Iranian regime, said: ‘I think it’s great that the Iran football team has expressed a disenchantment with their own government.

‘We must also oppose the Iran government.

‘But, as far as football is concerned, this is a game we’ve got to win.

‘I saw a glimpse of the team playing yesterday. They look in fine form – Joe Allen is very sprightly – so I’m full of confidence.’

Sara Penant, 28, from Caernarfon in North Wales, and one of the horde of Wales fans crowded around the giant bucket hat installation on Friday morning, said: ‘I’m excited. There’s such a buzz building around here, but slightly apprehensive about the game as well because obviously it’s a crucial one.

‘If Wales win, it will be chaos tonight, but if we lose it’ll change the whole dynamic of the next couple of days.

‘I hope we get to see it. We’re quite greedy now after the Euros last year and 2016.

‘If you’d talked to us years ago, probably seeing Wales score in a World Cup would have been enough, but expectations are higher now and we want to see that win.’

Share. Facebook Twitter Pinterest LinkedIn Tumblr Email
Previous ArticleWales vs Iran and other World Cup news and highlights
Next Article No woman owes you sex just because you took her on a date – Media personality, Moet Abebe tells men