‘We were focused and determined to beat Aduana Stars’ – Dr. Narteh Ogum 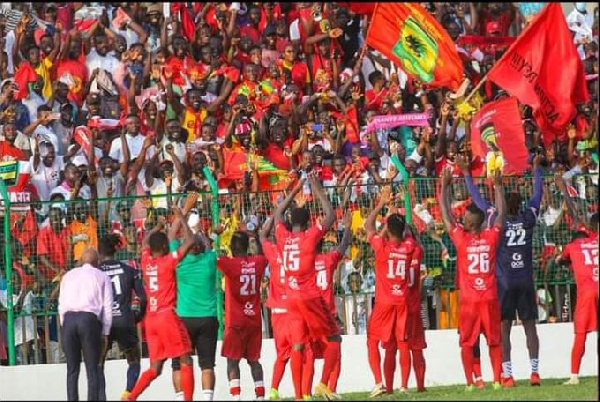 Dr. Prosper Narteh Ogum – Head Coach of Asante Kotoko, has said, his side was determined and focused on breaking the jinx surrounding their games at Dormaa, against Aduana Stars in the matchday 11 of the Ghana Premier League (GPL) at the Nana Agyemang Badu II, Park in Dormaa.

Kotoko defeated Aduana Stars 2-0, their first win at Dormaa since the “Ogya Boys” joined the premiership.

Speaking in a post-match interview, Coach Narteh Ogum said, they adhered strictly to their game plan, coupled with their determination and focus, they were able to beat them in their own backyard.

“Any time we had the ball they created pockets of spaces for us and we comfortably located key players and passed the ball upfront, ” he added.

He also attributed the victory to the demonstration of a positive attitude towards the game by his players.

“We also had to put away intimidation, threats from their fans and stick to our game plan on the field to secure the victory,” he noted.

“Over the years Kotoko has never beaten Aduana in Dormaa and I’m excited we broke the jinx today.

“We scored two unanswered goals. It would build our confidence going forward and we would also get better as we move on,” he added.

On the decision to use goalkeeper Danlad Ibrahim instead of regular Razak Abalorah, he said “they are all very good players but the decision was based on what happened at training before the game.

“We also wanted to give Danlad the opportunity to continue to build his confidence in the game, we don’t want to lose him or any of our goalkeepers”.

He commended the supporters for “believing in the team stating after coming from a setback from the FA Cup they stood behind the team and sung to cheer us”.

“I will always respect their opinions and will be humble towards them”, he stated.