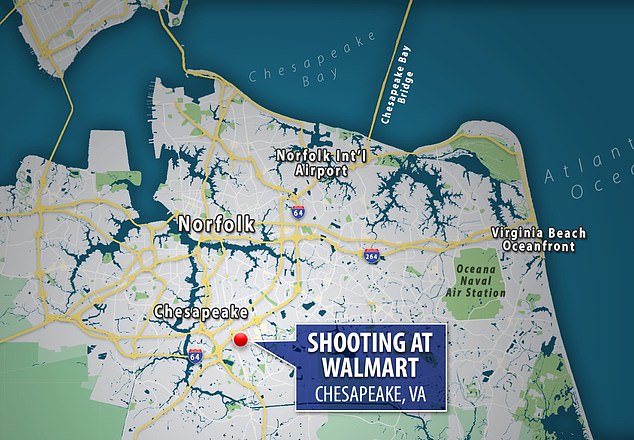 
A survivor of the Walmart mass shooting has described how she was spared by the killer store manager when he paused the rampage to send her home.

Jessie Wilczewski had only worked at the store for five days when the manager opened fire in a packed meeting room, killing six people.

She described how she took cover under a table as the gunman ‘laughed’ while several of her co-workers were shot.

Jessie said the manager then briefly stopped shooting, turned and pointed the gun at her. He reportedly told her to get out from under the table and said: ‘Jessie, go home.’

Six people were killed when the shooter opened fire in the breakroom of the Walmart in Sam’s Circuit, Chesapeake, at 10.12pm last night. He then turned the pistol on himself.

Jessie told WAVY her shift had started off normal. In the moments before the shooting, about 14 employees had gathered in a meeting room to learn about their duties, she said.

The gunman opened fire in the break room which is in the back of the store at around 10.12pm. The first 911 calls came in at 10.12pm and cops were at the scene at 10.14pm. They entered the store at 10.16pm, by which time the gunman had killed himself

She said the gunman then entered and began ‘firing shots from left to right’ while laughing.

She said she believes the attack was planned and victims were targeted.

Another worker, Briana Tyler, who had worked at the store for two months, told Good Morning America that the killer manager was the one to ‘look out for’.

Tyler said she narrowly avoided being shot, and that the gunman’s bullet missed her head by an ‘inch’

Briana Tyler, who survived the shooting, describes how the gunman opened fire within minutes of the night team turning up for their shift

10.16pm: Cops enter the store and find the gunman dead

‘There was always something going on with him just having an issue with someone but I never expected it would get to this level. He was the manager that everybody had something to say about.’

Describing the moment he opened fire, Tyler said: ‘As soon as my team lead said, ”all right, we have a light night tonight,’ I looked up and my manager just opened the door and he just opened fire.’

‘He wasn’t aiming at anybody specifically. He just literally started shooting throughout the entire break room and I watched multiple people just drop down to the floor, whether they were trying to duck for cover or they were hit.

Some employees have speculated it was a planned and targeted attack. The motive for the shooting is not yet known.

Another worker has also said they narrowly avoided the massacre because they showed up late to work.

On Wednesday morning, police raided the shooter’s three-bedroom home in Chesapeake, which is around three miles from the store.

Among the victims is 22-year-old Tyneka Johnson, who was named by her family on Wednesday.

Tyneka Johnson, 22, is among the six people shot dead by a Walmart gunman in Chesapeake last night At 10.10pm last night, the shooter opened fire in a break room of the store. It’s unclear if the rampage was contained to the break room or if he ventured into the store

Walmart’s statement after the shooting on Tuesday night. The company has not released any other information. Governor Glenn Youngkin also released a statement

Share. Facebook Twitter Pinterest LinkedIn Tumblr Email
Previous ArticleStories of Ukrainian resistance revealed after Kherson pullout
Next Article “My mum knelt down to welcome me. My wife knows when to switch from calling me baby to my father” – Pastor advises Christians on how to receive their prophets