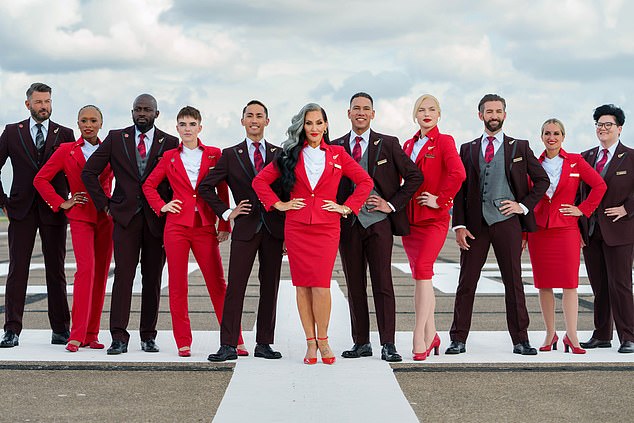 
Virgin Atlantic has today updated its uniform policy to remove gendered clothing requirements and introduce pronoun badges in a bid to allow staff to ‘wear uniforms that express their true identity’.

The airline has teamed up with RuPaul’s Drag Race star Michelle Visage in a bid to ‘reflect the diversity of its workforce’ and ‘offer its people a fluid approach to its red and burgundy uniforms, meaning LGBTQ+ colleagues will be able to choose either the red or the burgundy uniform, depending on which best reflects themselves.’

The company will also roll out optional pronoun badges which enable staff and customers to display which pronouns they wish to be referred to by.

The badges, available from today, can be requested at check-in.

Virgin describes today’s announcement as part of ‘an on-going drive to champion the individuality of its people and customers’ which includes allowing more customers to choose the gender-neutral ‘U’ or ‘X’ markers when booking their flights.

Virgin Atlantic Crew will now be able to choose which uniform they wear, with an end to ‘gendered’ clothing requirements

Michelle Visage, best known for being a judge on RuPaul’s Drag Race, has teamed up with Virgin and says it is her ‘job’ to be an ally and friend to the LGBTQ+ community

The company is also introducing optional pronoun badges, available to both staff and customers

This option is available to all who have passports with ‘gender neutral gender markers’ – which includes passport holders in countries such as the USA, India and Pakistan, but not the UK.

The latest changes to company policy are part of the airline’s ‘Be Yourself’ campaign which earlier this year saw the airline become the first in the UK to allow staff to display their tattoos while at work.

In 2019 Virgin Atlantic was one of the first major airlines to drop a requirement for female cabin crew to wear makeup whilst on duty, as well as to wear trousers instead of a skirt.

Jaime Forsstroem, Cabin Crew at Virgin Atlantic said: ‘The updated gender identity policy is so important to me. As a non-binary person, it allows me to be myself at work and have the choice in what uniform I wear.’

Michelle Visage, Tanya Compas, Talulah-Eve and Tyreece Nye have teamed up with Virgin Atlantic to showcase the new policy in a stylised fashion shoot that has been released today.

Tyreece Nye (pictured) described the uniform changes as giving a voice to everyone in the community: ‘This policy allows everyone to have a seat at the table’

Michelle Visage said: ‘As the mother of a non-binary child, and as an ally to the LGBTQ+ community, these efforts by Virgin Atlantic to further inclusivity for its people are extremely important and personal to me.

‘People feel empowered when they are wearing what best represents them, and this gender identity policy allows people to embrace who they are and bring their full selves to work.’

In a campaign video for the airline, she added: ‘I wanted to support this campaign to effect change in this world.

‘I have a trans non-binary child so for me changing the world is my job as a mum and as a friend and an ally.’

Tyreece Nye, a non-binary performer and activist who also participated in the campaign, said: ‘This policy allows everyone to have a seat at the table. It’s not taking away from anyone, it’s just allowing everyone from the community to just have a voice.’

Staff will be able to choose whether to wear the red or burgundy uniform, with trousers also available for the red option

First Officer Alison Porte added: ‘It’s not about cancelling anyone.

Juha Jarvinen, Virgin Atlantic’s Chief Commercial Officer says, ‘At Virgin Atlantic, we believe that everyone can take on the world, no matter who they are.

‘That’s why it’s so important that we enable our people to embrace their individuality and be their true selves at work.

‘It is for that reason that we want to allow our people to wear the uniform that best suits them and how they identify and ensure our customers are addressed by their preferred pronouns.’

Estelle Hollingsworth, Chief People Officer, at Virgin Atlantic said at the time: ‘It’s the best jobs that make people fly, and we couldn’t be more excited to be welcoming so many new cabin crew members to the skies with our recruitment drive.

‘We’re committed to supporting diversity both on the ground and on board, so are seeking people from all backgrounds who aspire to be the friendly, smiling and professional face that is the airline – with the iconic Virgin Atlantic style and flair.

‘We champion difference and individuality, and it’s by encouraging all of our people to truly be themselves at work that we uphold an inclusive environment where they each can thrive.

Barring any last-minute intervention, persons yet to fully re-register their SIM cards will have the…