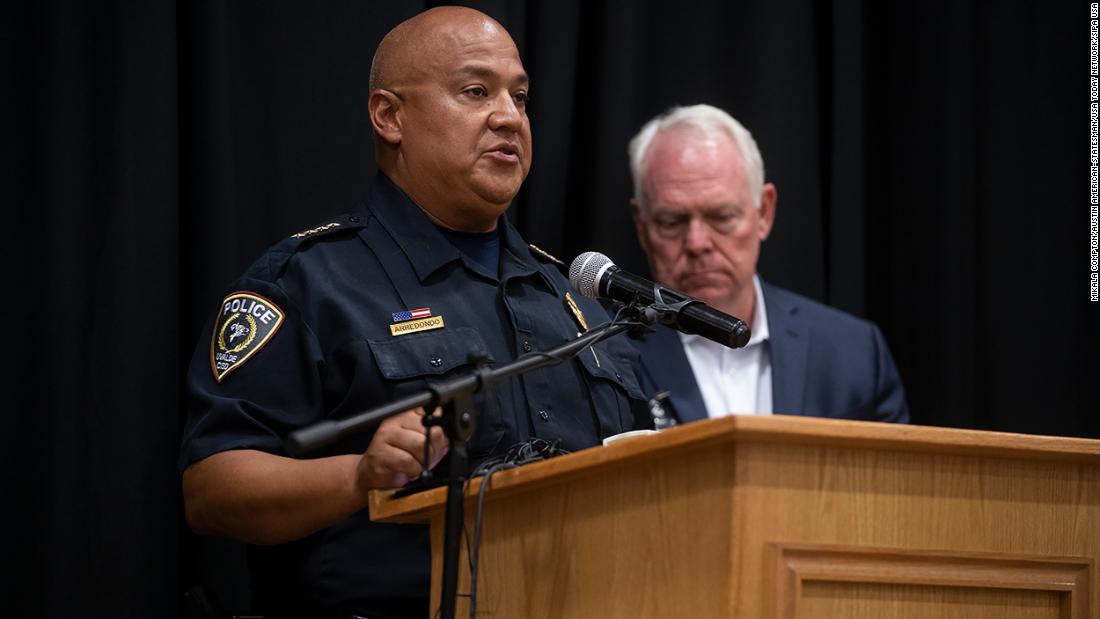 Share
Facebook Twitter LinkedIn Pinterest Email
Arredondo, who is the Uvalde school district police chief, said in his resignation letter earlier this month he was stepping down from the city council position to “minimize further distractions.”

“The Mayor, the City Council, and the City Staff must continue to move forward to unite our community, once again,” Arredondo said. In response, the city said his resignation was the “right thing to do.”

Arredondo’s attorney did not respond to CNN’s previous request for comment following his resignation letter.

The city council’s move came the same day the Austin American-Statesman newspaper published edited portions of surveillance video from the day of the shooting. One edited video shows the gunman walking down the hallway with a long rifle. The recording also shows officers approaching the classroom, but then retreating down the hallway and taking cover when gunfire is heard. Authorities do not directly confront the gunman until more than an hour later.
The district police chief was previously identified by state authorities as the on-scene commander during the May 24 massacre at Robb Elementary School. His role in the failed police response to the shooting — in which 19 students and two teachers were killed — has come under intense public scrutiny and criticism. Last month, he was placed on leave by the Uvalde Consolidated Independent School District.
“Because of the lack of clarity that remains and the unknown timing of when I will receive the results of the investigations, I have made the decision to place Chief Arredondo on administrative leave effective on this date,” Superintendent Hal Harrell wrote in the June announcement to the media.

In a hearing before the Texas Senate last month, Texas Department of Public Safety director Col. Steven McCraw called the law enforcement response to the attack an “abject failure” and placed the blame on Arredondo.

“Three minutes after the subject entered the West building, there was a sufficient number of armed officers wearing body armor to isolate, distract and neutralize the subject,” McCraw said at the time. “The only thing stopping the hallway of dedicated officers from entering rooms 111 and 112 was the on-scene commander, who decided to place the lives of officers before the lives of children.”

Arredondo told the Texas Tribune in June he did not consider himself the incident commander and assumed that another official had taken control of the larger response.
A new assessment of the law enforcement response published earlier this month that highlighted key issues and mistakes with the law enforcement response noted a lack of effective command during the incident.
Arredondo had been elected to city council on May 7, just weeks before the school shooting. He was sworn in privately, without advance notice to the media, several days after the attack.

In Tuesday’s city council meeting, there was applause heard from off-camera audience members after city leaders passed the motion to accept Arredondo’s resignation.