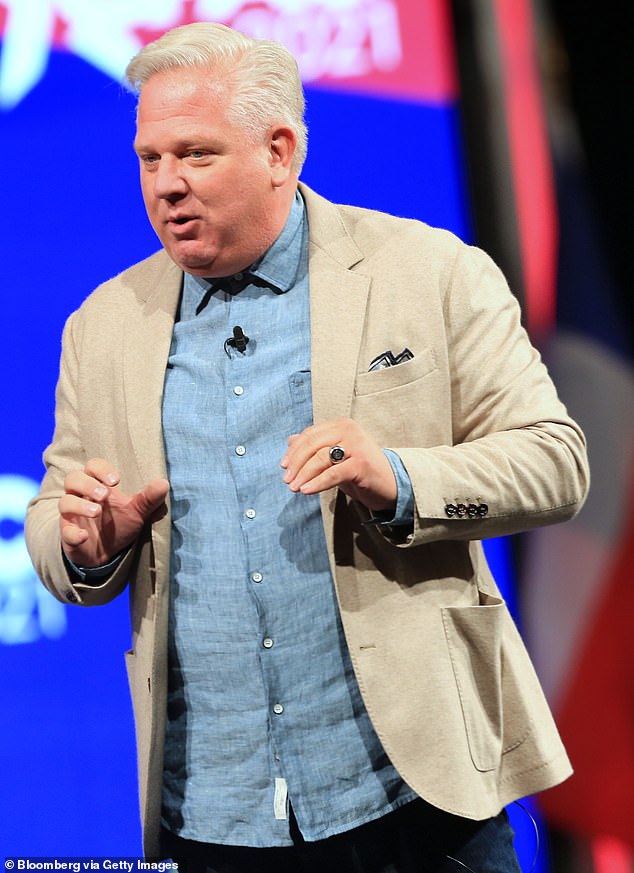 
Unvaccinated conservative talk radio host Glenn Beck has played down the severity of his symptoms after he contracted COVID-19 for a second time but voiced concern about the virus spreading to his lungs.

Beck, 57, confirmed he had coronavirus again during an appearance on Mark Levin’s podcast on Wednesday.

‘It’s starting to go into my lungs today and it’s a little bit disturbing. I’m on all the medications and treatments and everything else, so,’ he said.

Beck claimed he caught the Omicron variant last week and has been treating the virus with two controversial medications – the anti-parasite drug Ivermectin and hydroxychloroquine.

He and other big-name conservatives – including former President Donald Trump, Wisconsin Senator Ron Johnson and Fox host Tucker Carlson – have promoted Ivermectin to treat coronavirus, despite doctors saying it has no capacity to treat viruses such as COVID.

Glenn Beck, 57, confirmed he contracted coronavirus for the second time during an appearance on Mark Levin’s podcast on Wednesday

Last week, Beck posted his diagnosis on Instagram, where he said it just feels like a cold and he complained about not getting access to monoclonal antibody treatments

Beck said that he has been dealing with symptoms since last week and is getting better.

‘I have had it for about a week,’ Beck added, while coughing. ‘I’m not going downhill. I mean, I think I’m feeling better. It’s just getting into my lungs… you will want to avoid that,’ he said.

Beck assured the right-wing radio host that he is not worried about the severity of his illness.

‘Mark, I am not concerned about it. I’m really not,’ Beck declared. ‘I just am so done with this whole COVID thing. I know it is real.’

Beck and other conservatives have promoted Ivermectin to treat coronavirus, despite doctors saying it has no capacity to treat viruses such as COVID

Beck acknowledged that because of his weight and health issues he is more at risk.

‘I am a fatty-fat-fatso, so that is probably not the best thing, and I got some other issues,’ he said.

Last week, Beck confirmed catching the virus for the second time in just over a year in an Instagram post. He said it just feels like a ‘cold’ and he complained about not getting access to monoclonal antibody treatments.

‘My second covid test positive! Crap. So far it is way different than the first time I had it in Dec ‘20. That time it wiped me out for almost 3 weeks,’ he wrote and posted a picture of his positive diagnosis.

‘This time it is just the worst “cold” I have ever had. This is really good news if that becomes the dominant variant and almost the same pattern as the Spanish flu.’

He then went on to rail about the lack of availability of the much-sought antibody regimen.

‘The big question is: WHY CAN MY DOCTOR GIVE ME THE TREATMENT HE AND MANY OTHER DR’s Believe in. Why is it we are out of the Monoclonal antibody treatment?’ he wrote.

‘Do we still live in America or are we all going to just quietly accept that we just need to get over it and live with less.’

‘No Thanks Fidel. If I would become seriously ill it will only be because this administration along with Big Pharma won’t allow the free market to actually work,’ he added.

Instead, he has turned to treatments that have been discouraged by both the CDC and the FDA, specifically the use of Ivermectin.

The drug can be used in small doses to treat parasitic infections in humans, like head lice and scabies, but in the US is more widely used to combat roundworms and other parasites in livestock.

Both the Centers for Disease Control and Prevention (CDC) and Food and Drug Administration (FDA) have repeatedly warned Americans against using it to treat COVID.

‘Ivermectin has not been authorized or approved for use in preventing or treating COVID-19 in humans or animals,’ the FDA released in a statement earlier this year.

‘Ivermectin is approved for human use to treat infections caused by some parasitic worms and head lice and skin conditions like rosacea.’

‘Adverse effects associated with ivermectin misuse and overdose are increasing, as shown by a rise in calls to poison control centers reporting overdoses and more people experiencing adverse effects,’ the CDC echoed.

However, despite these warnings, Ivermectin has become popularly used by many to treat the virus, and was prescribed 88,000 times in one week, a 24-fold increase over a typical pre-pandemic week, according to the CDC.

The FDA has repeatedly urged people of the dangers posed by self-dosing.

‘You can also overdose on Ivermectin, which can cause nausea, vomiting, diarrhea, hypotension (low blood pressure), allergic reactions (itching and hives), dizziness, ataxia (problems with balance), seizures, coma and even death,’ the FDA warned.

Calls to U.S. poison control centers about Ivermectin exposures have increased five-fold from before the pandemic, with a drastic rise in July, according to the CDC.

Share. Facebook Twitter Pinterest LinkedIn Tumblr Email
Previous ArticleCovid-19 cases have begun to plateau in Africa in last 2 weeks, WHO says
Next Article Crowd throw beer on mother who confronted a lady for flashing her boobs before her kids at a game (video)