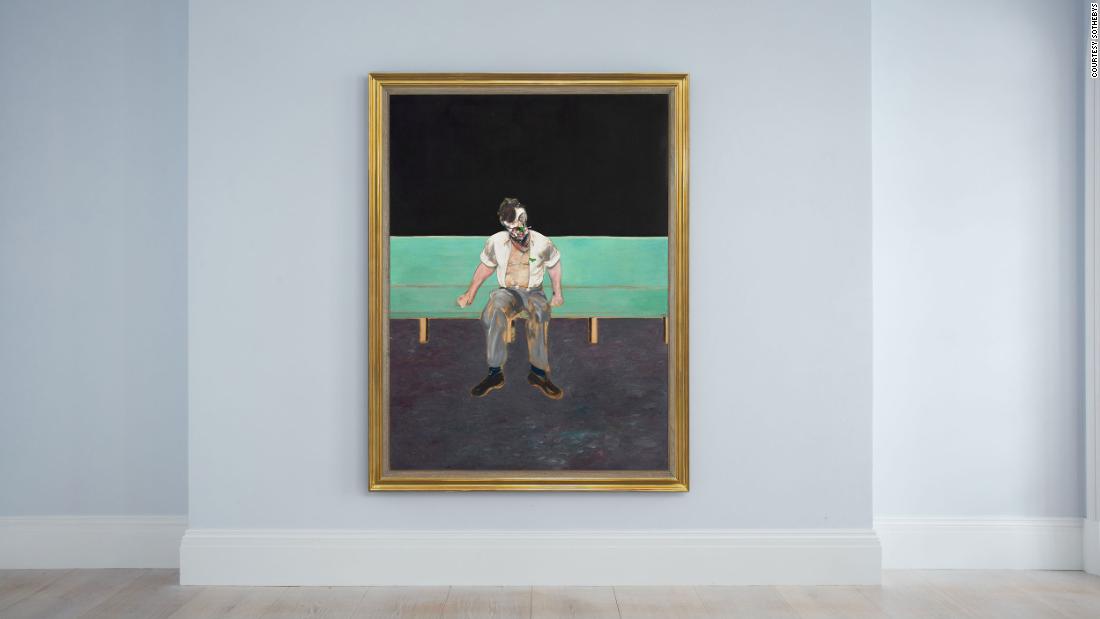 A rare portrait by celebrated painter Francis Bacon will go on auction this month at Sotheby’s London for the first time in the artwork’s history.

“Study for Portrait of Lucian Freud,” painted in 1964, was intended as the centerpiece to a large triptych — a multi-part artistic format favored by Bacon — but Bacon soon decided his creations should be seen as individual pieces instead. The paintings intimately captures British artist Lucien Freud, who was at one time a friend of Bacon’s and later, by the mid-1980s, a foe. The three artworks were exhibited together in Stockholm and Hamburg shortly after completion in 1965. Now, one side panel now belongs to a museum in Jerusalem and the other in a private collection.

The auction for what was once the center painting will take place on June 29 at the London auction house, with experts estimating the piece could fetch up to £35 million ($42 million). “Study for Portrait of Lucian Freud” has been hidden from public view in a private art collection for the past 40 years, according to Sotheby’s, which will exhibit the painting the weekend before it goes to auction.

“Study for Portrait of Lucian Freud” (1964) will go on display at Sotheby’s before auction. Credit: Courtesy Sothebys

Bacon and Freud’s tumultuous and well-documented relationship imbues the portrait with another layer of complexity and value. The pair met in 1944 and were said to have been inseparable until the 1980s, when professional rivalry got the better of them. Several tape recordings from that time shared with British newspaper The Observer in 2018 revealed Bacon openly ridiculing Freud’s skill. By 1982, Freud and Bacon — two pillars of British contemporary art — were not on speaking terms. Bacon’s tender “Study for Portrait of Lucian Freud,” painted decades before their falling out, is all the more melancholic since it has become a symbol of friendship lost.

According to Bella Freud, fashion designer and daughter of Lucien Freud, the soured friendship between the two artists cast a long shadow. “Francis was clearly somebody who he adored and admired. And there weren’t many people my father talked about in that way,” Freud said in a news release. “The things he repeated about him were just dazzling, utterly disarming and breathtakingly wonderful, and silencing because of their brilliance. I imagine he must have missed that when he stopped being friendly with him.”

Bacon is known as a big hitter at auctions, with his work often smashing pre-sale evaluations. In 2020, his 1981 piece titled “Triptych Inspired by the Oresteia of Aeschylus” sold for $84 million, surpassing the original estimate of between $60 and $80 million. Almost 10 years ago in 2013, another triptych of Lucien Freud from 1969 sold for $142 million in just six minutes and grabbed the title of most expensive artwork ever sold at auction. That title is now held by Leonardo Da Vinci’s “Salvator Mundi” after the controversial painting fetched an eye-watering $450 million in 2017.

Update: A previous version of this article stated that Bacon’s “Study for Portrait of Lucian Freud” was part of a triptych. The story has been updated to reflect the painting was only briefly intended to become part of a triptych. Within a year of finishing the three works the artist changed his mind and numbered each painting as individual pieces.