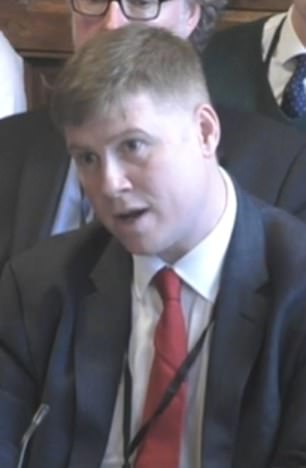 
Union barons today warned that a national strike to cripple Britain is ‘coming’ – and workers who ignore it will be pariah ‘scabs’ – as a 5% pay rise for rail workers earning more than more than £60,000 was set to be rejected as too low.

Heads of the RMT and Aslef unions have called on workers ‘across the economy’ including NHS staff, postal workers and teachers to ‘stand together’ with rail workers they represent for a summer of discontent.

Aslef is set to meet tomorrow to announce more strikes, claiming nine out of ten members want to walk out over pay, but Britain’s unions are edging towards coordinated strikes to create the first national strike since 1926.

Train drivers, civil servants, teachers, Heathrow staff, barristers and NHS staff are all demanding pay rises of between seven cent and a whopping 30 per cent over the next five years, with threats of strike action looming.

RMT chief Eddie Dempsey, one of Mick Lynch’s generals, told MPs on the Transport Select Committee: ‘Across the economy and this country: Nurses, postal workers, railway workers are about to stand together and say: ‘We deserve a pay rise’. And that is coming. There is a bigger thing happening in this country that people don’t seem to realise.

‘People are not prepared to accept any longer that they have to continue to be made poorer so that people at the top can continue to rake in profits. That is over and that is going to change in the coming period’.

RMT chief Eddie Dempsey, one of Mick Lynch’s generals, told MPs on the Transport Select Committee that rail workers will stand with nurses and rail workers to strike as the threat of a national general strike grows. Aslef boss Mick Whelan warned ‘scabs’ not to break the strike

Who else is set to join the summer strike contagion?

Strikes could spread across the economy in the coming months. These are the areas affected – and those which could be hit – and the unions behind the ballots.

Strikes by the RMT across three days last week closed half of the country’s rail network and reduced service to a fifth of normal levels.

The Transport Salaried Staffs’ Association (TSSA) is also balloting thousands of staff at Network Rail and several train companies, with the possibility of strikes as soon as July.

The train drivers’ union Aslef is set to strike at Greater Anglia and the Croydon Tramlink in the coming weeks.

Unite is also balloting about 500 British Airways check-in staff at Heathrow over a refusal to reverse a 10 per cent pandemic pay cut. If workers vote in favour, strikes are likely in July – potentially ruining some summer holidays.

Teachers’ union NAS/UWT will ballot members over action unless the Government backs demands for a 12 per cent pay rise. A pay award for 2022/23 is due in November.

The National Education Union has said it will ballot its 460,000 members if a pay rise in line with inflation is not offered by the Government.

Unison, which represents NHS staff, has said strikes are possible unless the annual pay offer for them is not close to the rate of inflation. The British Medical Association, which represents doctors, has also said it will prepare for a ballot unless junior doctors are given a 22 per cent ‘restorative’ pay rise.

The Royal College of Nursing has also demanded a pay rise of 5 per cent above inflation.

The Public and Commercial Services Union, which represents civil service workers, will hold a ballot in September over pay, pensions and redundancies.

The Unison, GMB and Unite unions have said local government staff in England, Wales and Northern Ireland should receive a pay increase of at least £2,000 each. Workers include rubbish collectors, library staff, teaching assistants and care workers.

Unite said it will support ‘any action’ by workers to achieve a pay rise.

The Communication Workers Union will ballot Royal Mail workers in a dispute over a pay rise offer of 2 per cent.

The union has also sent ballot papers to BT workers including engineers, contact centre staff and retail employees over pay. It could result in the first strike at the company since it was privatised in the mid-1980s.

For some commuters hit by rising fuel costs and rail strikes, it is the glimmer of a silver lining.

This month traffic wardens will start a seven-day strike in protest at pay cuts and ‘fire and rehire’ tactics.

The walkout in Wiltshire means penalty charge notices will not be issued and charges in council car parks will not be enforced, costing £30,000 in revenue.

The action by the GMB from June 30 to July 6 follows two days of strikes in the county in May.

The union is opposing a pay cut of 10 per cent, or £2,000 a year, for traffic wardens, and said members were ‘at the end of their tether’.

Wiltshire Council is seeking to save £800,000 annually by ending contractual unsocial hours payments for almost 350 staff, including social workers and care workers.

Ministers have been accused of introducing a ‘scab charter’ after their plans to allow agency workers to replace strikers were approved in the Commons.

Mick Whelen, Aslef’s general secretary told MPs they had introduced a ‘scab charter’ after their plans to allow agency workers to replace strikers were approved in the Commons.

He said: ‘The scab charter you have passed. That’s what it will be. In our industry there are still people not being spoken to who scabbed in 1955 and 1982. Scab labour will only work for scab management. What it will do is destroy the industrial relations of this industry going forward.

‘Anybody who employs scab labour – and it’s unsafe – we will not be working with them. And afterwards, anyone who employed scab labour, we will look at them very differently in the future’. When asked what he meant by scab he said: ‘Anyone who breaks the strike and crosses the picket line’.

RMT union bosses have also been accused of ‘bullying’ members into going on strike as a threatening letter sent to a worker who refused to walk out emerged.

Today unions are expected to rejected pay rise offer for the lowest-paid workers in a bid to avert a summer of strikes.

Network Rail offered members of the militant RMT union with a salary below £24,000 the equivalent of a 13 per cent pay rise this year.

It would come with ‘no strings attached’ and be back-dated to January.

The rise would also be matched next year if the RMT accepts modernisation of some working practices. It is more than the current 11.7 per cent RPI rate of inflation.

For higher-paid workers on salaries of more than £60,000, the offer would be worth just over 5 per cent this year and next. All workers will receive a cash bonus this year and next of around £650, with lower-paid staff given an extra £250.

They would also get a 75 per cent discount on rail fares, including for their spouses and children, and a guarantee of no compulsory redundancies – a key demand of the RMT.

Network Rail bosses believe the two-year pay offer is generous and are preparing to cut union barons out of talks and go straight to staff to try to push through a deal if it is rejected.

Sources said this would be in the form of an internal referendum as they believe workers will accept the offer.

A pay offer was also made to the TSSA rail union, whose members have also voted for strike action. Because it represents better-paid workers in managerial roles, the offer was a slightly lower 4 per cent rise for this year and 3 per cent for 2023 if some modernisation of working practices is accepted. They would also receive £650 bonuses and 75 per cent discounted rail travel.

RMT boss Mick Lynch said the union’s national executive committee (NEC) will consider has already indicated it would be rejected.

He also threatened to coordinate with the TSSA and train drivers’ union Aslef, whose members have also voted for walkouts. Workers for all three unions, which represent around 90,000 rail workers, could stage a national strike at the end of this month or early August.

Mr Lynch said: ‘Our NEC will have to make a decision on this offer tomorrow. But Network Rail and the train-operating companies need to understand that RMT has done deals with both London Underground and recently Merseyrail that were well in excess of what our members are being offered here [8.4 per cent and 7.1 per cent pay rises respectively].

‘We will not hesitate to call further strike action and seek to coordinate with Aslef and TSSA, if the rail industry will not seek a negotiated settlement with us.’

TSSA boss Manuel Cortes also suggested his union will reject the deal, saying: ‘These latest offers don’t come close to what our Network Rail members expect. After years of pay freezes, these latest proposals will only bake in real-terms pay cuts.

‘However, we note that, after over a decade of a commitment by Network Rail bosses to no compulsory redundancies, this is back on the table.

‘Frankly, the company only threatened compulsory redundancies to seek to cow our members into accepting a rubbish pay deal.’

Even if the RMT and TSSA accept the offers, disputes between all three unions and train operators covering most of the country will still be outstanding. But it could lessen the impact of strikes and potentially pave the way for a breakthrough in talks over the remaining disputes.

It comes after Aslef this week accepted a deal with ScotRail which included a 5 per cent rise in basic pay.

Network Rail, which manages track maintenance and signalling, wants to modernise working practices to unlock millions of pounds of savings.

Of the latest offer, a Network Rail spokesman said: ‘While money is extremely tight because of the railways’ financial troubles following the pandemic, we can afford to make this offer if our people accept change and compromise, which will fund it.’