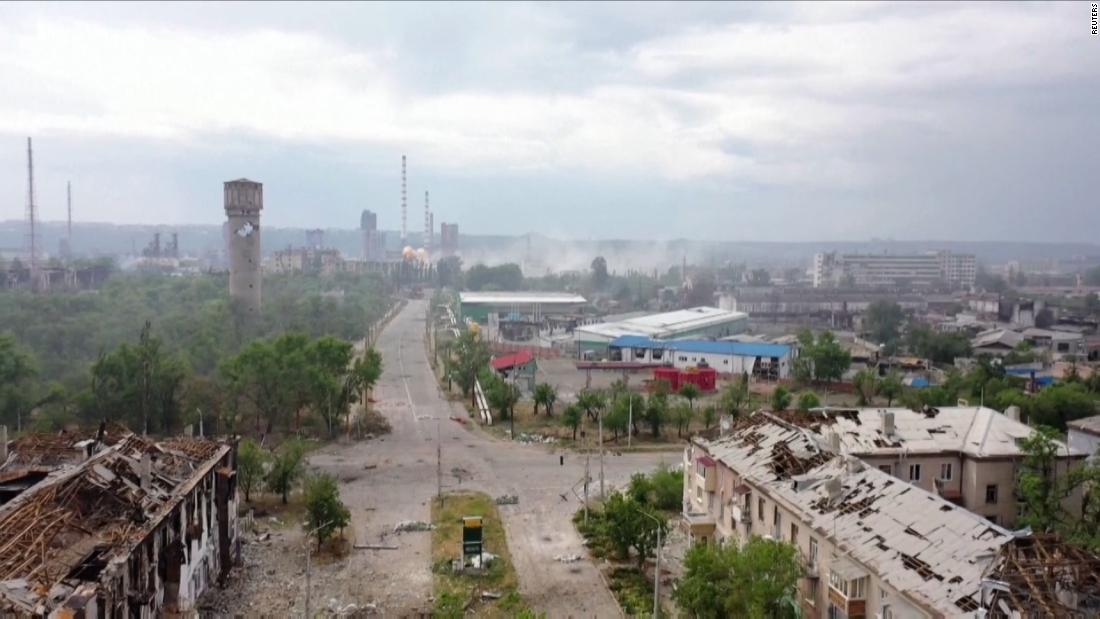 “The [Russians] appointed a commandant. But the city is so destroyed that it will be difficult for people to cope with this situation,” said military administration chief Oleksandr Striuk.

Regional military officials said Friday that the last troops in Severodonetsk had been ordered to leave, as it was impossible to keep defending their positions. This effectively ceded the city to Russia and put the eastern Ukrainian region of Luhansk almost fully under Russian control.

Severodonetsk was one of the last major Ukrainian strongholds in the area. Serhiy Hayday, a top military commander in east Ukraine, said the military made the decision to evacuate “because the number of dead in unfortified territories may grow every day.”

“Currently, there is no possibility to leave the city, people can try to leave only in the direction of the occupied territory. We will facilitate the evacuation, but so far there is no such opportunity,” Striuk said.

“Civilians are leaving the territory of  the Azot plant, they [the Russians] shoot propaganda videos with them. People spent almost 3 months in basements, shelters. At the moment, they need physical and psychological help,” Striuk added.

Ukraine has been hit by an avalanche of missile strikes, with official accounts there estimating that Russia fired more than 40 missiles at targets in Ukraine in the past 24 hours.

The General Staff of the Ukrainian military said there was more shelling around Kharkiv, and the Russians had tried to launch an assault near the settlement of Uda, north of Kharkiv, but “were decisively suppressed by our soldiers.”

North of Sloviansk, the Ukrainian military reported continuing battles in areas that have been on the front lines for months. The Russians used artillery and air strikes against Ukrainian positions some 20 kilometers north of the city.

On the southern front, the Ukrainian military reported that a Russian assault to recover previously lost ground in Kherson had been repulsed. Ukrainian forces have been pushing into Kherson, with limited success, from Mykolaiv region.
The mayor of the city of Mykolaiv, Oleksandr Sienkevyck, reported explosions there overnight. On Friday, he urged “everyone who wants to stay alive to leave the city,” and said it was being “shelled every day,” with 111 people killed so far.

Explosions were also reported by the regional military administration in Zhytomyr in central Ukraine, killing one soldier and wounding another, although the city’s mayor said Zhytomyr itself was “not hit.” The head of the military administration said “about 10 missiles” had been shot down by Ukrainian defenders. Regional authorities in Lviv in western Ukraine also reported missile strikes against military facilities.

Two US officials with direct knowledge of US intelligence assessments told CNN Russian forces were gaining an advantage in eastern Ukraine as they learned from mistakes made during the earlier stages of their invasion of the country, including better coordination of air and ground attacks as well as improvements to logistics and supply lines.
Meanwhile, Ukrainian troops in the eastern city of Lysychansk are under growing pressure from Russian forces that have taken territory to the south of the city. Hayday said Russian forces tried to enter Lysychansk from the south and to surround the city — and had also carried out an airstrike on the city.

The Ukrainian military’s General Staff said Saturday that Russian efforts to cut off the main route from Bakhmut to Lysychansk continued. It said Ukrainian soldiers had stopped the advance of Russian infantry near Volodymyrivka, which is 5 kilometers from the highway. But the General Staff acknowledged the Russians had advanced 1 kilometer as they close in on Bakhmut.

The Russian goal appears to be to cut off Ukrainian forces in a pocket of Luhansk and Donetsk regions. If they capture Bakhmut they would be able to prevent most resupply efforts to Ukrainian defenders in Lysychansk and surrounding districts.

As Ukrainian authorities assessed the damage from dozens of missile strikes overnight, the Defense Ministry’s Main Intelligence Directorate said that many of the missiles were fired from Belarusian airspace.

The Directorate said that “missile strikes from the territory of Belarus are a large-scale provocation of the Russian Federation in order to further involve Belarus in the war against Ukraine.”

It said ‘”Russian bombers hit directly from the territory of Belarus. Six Tu-22M3 aircraft were involved, which launched 12 Kh-22 cruise missiles.” The Directorate said the missiles had been launched from airspace above the district of Petrikov in southern Belarus.

“After launching the missiles, they returned to Shaikovka airfield in Russia. The strike was launched on Kyiv, Chernihiv and Sumy regions.”

“This is the first case of an air strike on Ukraine directly from the territory of Belarus,” the Directorate said. CNN cannot confirm that allegation.

Ukraine’s air force command has echoed the Defense Ministry’s comments, saying on its Facebook page that “more than fifty missiles of various types were fired: air, sea and ground-based.”

There has been no word from the Belarus government on the alleged use of its airspace for the latest strikes against Ukraine.

A Russian missile hit the town of Kostiantynivka in Donetsk Saturday, according to both local authorities and the Russian Ministry of Defense.

But the two sides’ versions of what was targeted differ. Oleksii Roslov, head of Kostiantynivka civil military administration, said an “object of critical infrastructure was hit,” affecting gas supply and killing one person.

The Russian Ministry of Defense published a short video of the missile attack, saying it targeted Polish mercenaries based at the Megatex plant in Kostiantynivka and had killed up to 80 of them, as well as rocket launchers.

Russian Defense Ministry spokesman, Lieutenant General Igor Konashenkov, said: “The enemy continues to suffer significant losses. Up to 80 Polish mercenaries, 20 armored combat vehicles and eight Grad multiple launch rocket systems were destroyed as a result of strikes with high-precision weapons of the Russian Aerospace Forces on the buildings of the Megatex zinc plant.”

Roslov denied the claim. “There weren’t any military there. Many people were there after the strike, everyone can confirm there were no military,” Roslov told CNN.

Around 45,000 people remain in the town, which is some distance from the front lines.