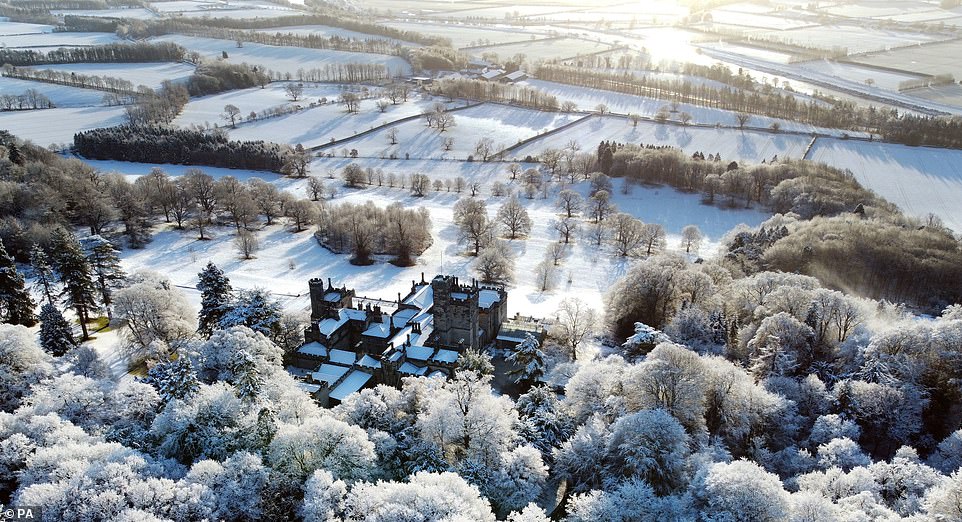 
Britain is back in the icy grip of winter today after overnight temperatures fell to -6C and the Met Office warned of up to half a foot of snow, 80mph winds and frozen roads for parts of the country.

Sub-zero conditions and wintry showers are expected to dominate for most of the week, with a cold weather alert in place for northern England until Thursday lunchtime, with rain, hill snow and ice set to cross the UK.

The record-breaking balmy New Year weather observed in recent days that saw the mercury hit 16.3C (61.3F) is now being overtaken by bitterly cold conditions, with Shap in Cumbria falling to -6C (20F) early this morning.

Temperatures in northern England could fall to similar levels in tomorrow night and it could be -4C (25F) in the South – while in northern Scotland there is a warning for snow, strong winds and ice today and tomorrow.

In the Highlands winds reaching 80mph and up to 6in (15cm) of snow could cause blizzard conditions, while there is also a threat to motorists from ice – which will also affect parts of northern England.

And a flooding risk remains for many areas of Britain with 73 flood alerts or warnings in place today – including 46 alerts and eight warnings in England; eight alerts and ten warnings in Scotland; and one alert in Wales.

A further weather warning is then in place for Friday covering Scotland, northern England and Northern Ireland which warns of ice and up to 4in (10cm) of snow on higher ground as wintry showers arrive from the West.

Tomorrow night in Scotland, the mercury could drop to -8C (17F) or even lower – and Met Office chief meteorologist Neil Armstrong said the plunge in temperatures would spread south from northern England today.

People walk their dogs through the snow in Corbridge, near Hexham in Northumberland this morning

Freshly-fallen snow covers a roundabout in Corbridge, near Hexham in Northumberland this morning

He added: ‘This change is being brought on by a cold northerly flow, which brings the risk of some wintry showers in northern England, especially over high ground.

‘Minimum temperatures over the next few days are expected to drop below freezing, heightening the risk of some ice.’

Forecasters expect tomorrow night to be the coldest, with a frost across much of the country and temperatures dropping to -2C (28F) in the North East.

Southern England is also likely to see sub-zero temperatures before rain, sleet and some hill snow sweeps across the country on Thursday.

The UK Health Security Agency urged people to check on the vulnerable in the coming days, including the elderly and those with serious illnesses.

In England, this might bring snow over the Pennines and North York moors, but it will be ‘pretty wet stuff’, forecaster Simon Partridge said.

The New Year warm spell comes to an end as temperatures drop amid heavy snowfall today near Consett, County Durham

Cars make their way along the A1101 in Welney on the Cambridgeshire Norfolk border, as the River Delph and New Bedford River have flooded the surrounding area known as the Ouse Washes today

But in Aberdeenshire and northern and eastern Scotland, winds of up to 80mph could create ‘localised blizzard conditions’, with the Met Office issuing warnings of snow and ice for travellers.

Aviemore, in Scotland, saw 2in (5cm) of snow yesterday, which would be added to overnight, Mr Partridge said, suggesting that this might be ‘good news’ for the Cairngorms town’s ski resorts.

‘But I’m not sure they’ll be overly happy about the strength of the wind,’ he added. Elsewhere, in Lincolnshire or the Pennines, any snow is likely to be ‘slushy stuff’ over the next few days.

Mr Partridge said that those in the South will also feel the chill today, as the winds could make the 8C (46F temperature mark feel much harsher.

Freshly-fallen snow covers a roundabout on the A69 Corbridge bypass, near Hexham in Northumberland today

Freshly-fallen snow covers a roundabout on the A69 Corbridge bypass, near Hexham in Northumberland today

‘It will definitely be colder, so if you’re going out, think about an extra layer [today] … you might need anything to keep the wind out because it’s not going to be pretty,’ he added.

Tomorrow in the West is likely to be a ‘dry, bright day’ as the winds drop, with few showers, but Thursday will see a ‘band of rain’ move in, with icy temperatures overnight.

Towns in the South could face temperatures of -4C (25F) on Thursday morning.

Mr Partridge said: ‘It’s basically what we should have for this time in January; it’s just that we’ve been so mild for so long that it’s suddenly a bit of a shock to the system.’

But there are signs of brighter things to come with spring flowers bringing an early splash of colour in parts of the country.

There are eight alerts and ten warnings in place for Scotland today, imposed by the Scottish Environment Protection Agency

Conditions have been so springlike that daffodils were in full bloom by the roadside in Somerton, Somerset, yesterday

Conditions have been so springlike that daffodils were in full bloom by the roadside in Somerton, Somerset, yesterday.

Their arrival comes thanks to the balmy conditions in recent days that saw Britons flock to beaches and enjoy walks outdoors as the Christmas and New Year holiday period came to an end.

And that came after the country’s mildest New Year’s Eve on record last Friday when Merryfield in Somerset reached 15.8C (60.4F), beating the previous high of 14.8C (58.6F) set in 2011 at Colwyn Bay in North Wales.

British tourist, 49, is DECAPITATED with a SICKLE in Thailand by ‘local man who attacked him’