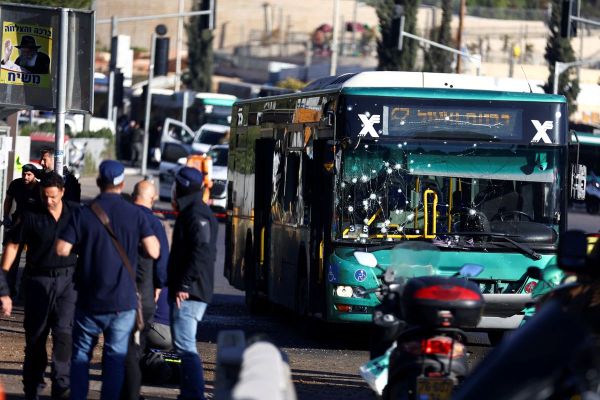 
Two explosions at bus stops on Jerusalem’s outskirts killed one person and wounded at least 14 others on Wednesday, health officials said, in what Israeli police said appeared to be an attack by Palestinian militants.

They blamed the initial blast, which occurred during rush hour, on an explosive device planted at a bus station near the city exit. The second – about 30 minutes later – hit a bus stop in the vicinity of an urban settlement in the east of the city.

“There has not been such a coordinated attack in Jerusalem for many years,” Levi added.

Israeli army radio said the explosive devices were hidden in bags and at least one of them contained nails to maximise the impact.

Security camera footage aired by N12 news showed the moment of the first explosion with a sudden cloud of smoke billowing from the bus stop. Television showed debris strewn around the site, which was cordoned off by emergency services.

Israel’s ambulance service said 12 people had been taken to hospital from the first blast and three people were wounded in the second explosion. One of the wounded died in hospital, the Shaare Zedek Medical Center said.

The explosions, which carry echoes of the bus bombings that were a hallmark of the Palestinian revolt of 2000-2005, follow months of tension in the occupied West Bank after the Israeli military launched a crackdown in the wake of a series of deadly attacks in Israel.

In Gaza, a spokesman for the Palestinian militant group Hamas praised the Jerusalem explosions but stopped short of claiming responsibility.

Hamas spokesman Abdel-Latif Al-Qanoua linked the blasts to “the crimes conducted by the (Israeli) occupation and the settlers”.

The explosions came as former prime minister Benjamin Netanyahu negotiates with allies to form a new right-wing government including members of religious and far-right parties.

One of his allies, ultra-nationalist lawmaker Itamar Ben-Gvir who heads the Jewish Power party, visited the scene of the first bombing where he demanded tough action against militants.

“Even if it’s in the West Bank, lay siege to them and go from house to house in search of guns and restore our deterrence power,” said Ben-Gvir, who hopes to be appointed police minister in the new government.

In a separate incident, Palestinian militants late on Tuesday abducted the body of an Israeli high-school student who had died in a Palestinian hospital in the West Bank city of Jenin after being injured in a car crash nearby, the teenager’s uncle told Kan Radio.

The Israeli military said it expected the body would be returned soon. It was unclear why the militants had taken the body and there was no immediate indication of any connection between this incident and the bombings.

Tainan, Taiwan CNN  —  Taiwan’s President Tsai Ing-wen has resigned as the leader of the…