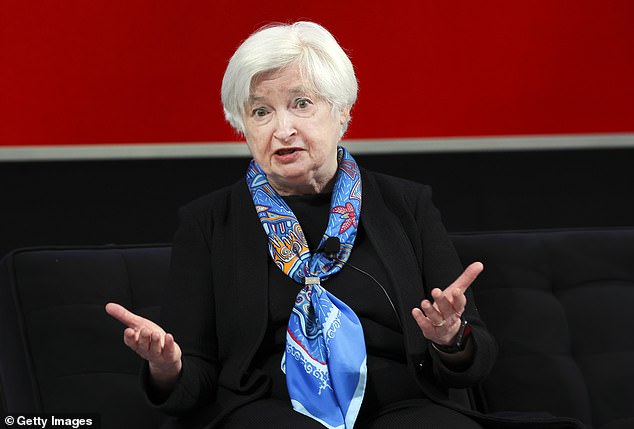 Treasury Secretary Janet Yellen said Thursday that inflation will ‘certainly’ come down by next year, but denied the country was entering a recession because the labor market is so ‘tight.’

‘A full-scale recession is a period when there’s excessive unemployment. You don’t have a strong labor market,’ Yellen said during an appearance at the Atlantic Festival in Washington. ‘We have really one of the tightest labor markets right now we’ve had in American history.’

She was asked by the Atlantic’s Ron Brownstein if inflation would be in control by the end of next year – or if it could become a theme during the 2024 presidential election.

‘I believe it’s going to come down, certainly next year,’ she told Brownstein. ‘Let’s be clear that there are risks.’

The example she gave was whether Russian President Vladimir Putin kept up his assault on Ukraine.

‘I think it will be better,’ she said. ‘Perhaps we will get through next year, but I certainly expect to see inflation come down.’

Treasury Secretary Janet Yellen said Thursday that inflation will ‘certainly’ come down by next year, but denied the country was entering a recession because the labor market is so ‘tight’

At the top of her appearance, she acknowledged how troublesome inflation had become.

‘So first, let me say I think inflation has been running at unacceptably high rates,’ she said. ‘It is a huge issue for every American household. It’s leading to a great sense of economic insecurity for Americans. And we don’t want to see it become endemic.’

Yellen, 76, then recalled her own experience of living through the 1970s.

‘It is President Biden’s top economic priority to get it down, and that is what the Fed is trying to do,’ she said.

She blamed inflation on a number of things.

The supply chain bottlenecks relating to the COVID-19 pandemic.

‘And Putin’s completely unacceptable, immoral war against Ukraine has led to the surge in energy and food crisis that is also contributing to inflation,’ she added.

Yellen said that the administration has made moves to ease supply chains and release oil from the Strategic Petroleum Reserve.

‘But we also have a very tight labor market,’ she said.

‘Right now we have two job openings for every unemployed worker, and I think that’s putting inflationary pressure into the system,’ she later explained.

She also said she believed there was a way for inflation to come down without cutting wages for workers.

‘Now I believe there is a path through this that can succeed in bringing down inflation while also maintaining what I think all of us would regard as a strong labor market,’ Yellen said.