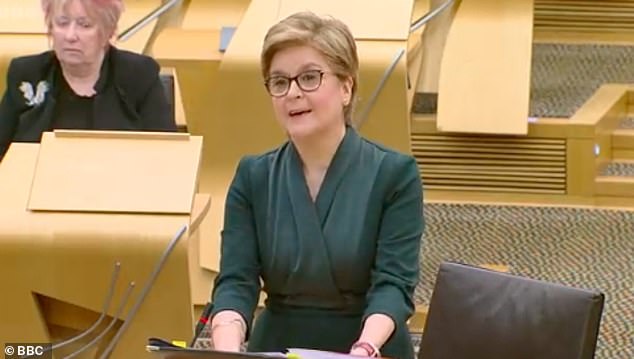 
Nicola Sturgeon today seized on the Conservative Party’s civil war over the Downing Street party row as she tried to take advantage of Tory infighting to boost her case for Scottish independence.

Jacob Rees-Mogg labelled the Scottish Tory leader Douglas Ross a ‘lightweight figure’ after he called for Boris Johnson to resign.

Mr Ross said the Prime Minister’s position is ‘no longer tenable’ but Mr Rees-Mogg hit back as he claimed the most senior Tory in Scotland is not a ‘big figure’.

There is a growing divide between the Scottish Tories and their colleagues in London and the SNP has wasted no time in highlighting the divisions.

Ms Sturgeon, the SNP leader, joked at lunchtime that ‘even I am not as derogatory about him (Mr Ross) as his own Tory colleagues’.

Speaking at First Minister’s Questions at Holyrood, she said the attack on Mr Ross showed the UK Government’s ‘utter contempt for Scotland’.

She said that one of the benefits of independence would be that Scotland would ‘no longer have to put up with being treated like something on the sole of Westminster’s shoe’.

The First Minister’s comments came after the SNP’s Commons leader Pete Wishart said the Scottish Tories ‘are supposed to be the praetorian guard of the precious Union’ but Mr Rees-Mogg had ‘undermined them and thrown them under the proverbial bus’.

Speaking in the Commons, Mr Wishart asked: ‘If this is how the Government even treats the Scottish Tories, why should the Scottish people even entertain remaining part of their useless Union?’

The SNP MP claimed the UK Government ‘could not care less about Scotland’ as he asked Mr Rees-Mogg if he would apologise to Mr Ross – but the Cabinet minister declined to do so.

Conservative MSPs at Holyrood are in open revolt against the PM after heaping pressure on him to resign.

Mr Ross, the MP for Moray, said Mr Johnson should quit after he admitted attending a Downing Street party during lockdown.

He told STV News yesterday afternoon: ‘I said if the Prime Minister attended this event in Downing Street on May 20, 2020, he could not continue as Prime Minister so, regretfully, I have to say his position is no longer tenable.’

Politico reported that 26 of the 31 Scottish Tory MSPs have now gone on the record to call for Mr Johnson to go while the BBC’s Newsnight programme said all 31 believe the PM has to quit.

But Mr Rees-Mogg went on the offensive last night as he told LBC Radio: ‘I don’t think it is a surprise that Douglas Ross takes this view, he has never been a supporter of the Prime Minister.

‘He has constantly made disobliging comments about the Prime Minister. I listen to the Scottish Secretary, to Alister Jack.’

Told that Mr Ross had backed Mr Johnson during the Tory leadership contest, Mr Rees-Mogg said: ‘People do sometimes vote for people in leadership elections who don’t live up to expectations.

‘I don’t think Douglas Ross is a big figure. I think Alister Jack is a really serious and senior figure.’

The Commons Leader then doubled down during an interview on Newsnight as he said: ‘I would actually say that the Secretary of State for Scotland, who is a big figure, is very supportive of the Prime Minister, has made that absolutely clear.

‘Douglas Ross has always been quite a lightweight figure so I don’t think that his… I think the Scottish Secretary is a much more substantial and important figure in this.’

The comments prompted an immediate backlash as the atmosphere within the Conservative Party continued to sour.

Conservative MP Andrew Percy hit back at Mr Rees-Mogg, reportedly telling the BBC that ‘Douglas Ross has far more understanding of the lives and views of normal people… than some of those attacking him ever will’.

Mr Percy said that Mr Rees-Mogg ‘prides himself on a carefully crafted reputation of over the top politeness’ but that he ‘might need to practice his act a little more in the mirror tonight after his personal attack on Douglas’.

Downing Street dismissed suggestions at lunchtime that Mr Rees-Mogg’s comments could undermine the campaign to preserve the Union.

Mr Ross said Mr Johnson should quit after he admitted attending a Downing Street party during lockdown . The two men are pictured together in November 2019 during the general election campaign

The Prime Minister’s Official Spokesman said: ‘No, I think you can see what we are doing on the Union by what Michael Gove has set out just today on the review into intergovernmental relations, which seeks to take tangible action to strengthen our Union. That’s very much been our focus.’

Ms Sturgeon has said she wants to hold a second referendum on Scottish independence before the end of 2023.

The SNP’s Westminster deputy leader, Kirsten Oswald, said in a statement: ‘By dismissing their Scottish branch office as a bunch of “lightweights” and nobodies, the Tories are revealing their disdain for Scotland and making the case for independence.

‘Not only is it deeply humiliating for Douglas Ross but it is a telling insight into the arrogant and dismissive attitude that the Tory government has towards Scotland as a whole.’

Mr Wishart raised the Tory civil war during business questions in the Commons this morning as he asked Mr Rees-Mogg if he would apologise to Mr Ross.

Mr Wishart said: ‘Now of course the Scottish Tories know exactly how the rest of Scotland feels as the leader of the House poured his scorn and contempt upon them last night.

‘According to him, the democratically elected Scottish Tory leader is an insignificant figure, a lightweight, a nobody, presumably just like every single Tory MSP who agreed with their Scottish leader.

‘The Scottish Tories are supposed to be the pretorian guard of the precious Union and the leader of the House has just undermined them and thrown them under the proverbial bus.

‘If this is how the Government even treats the Scottish Tories, why should the Scottish people even entertain remaining part of their useless Union?

‘Does he now want to take this opportunity to apologise to the honourable member for Moray for his remarks last night or is he prepared to make them once again in this House just to confirm what we in Scotland all know: This is a Government that could not care less about Scotland and Scottish democracy.’

Mr Rees-Mogg replied: ‘The problem with the honourable gentleman’s approach to business questions is that he is so angry every week that one never knows whether it is real or it is synthetic.’

The SNP’s Commons leader Pete Wishart said the Scottish Tories ‘are supposed to be the praetorian guard of the precious Union’ but Mr Rees-Mogg had ‘undermined them and thrown them under the proverbial bus’.

Mr Barclay replied: ‘I think he is a hugely talented colleague. I work extremely closely with him and I look forward to doing so.’

Mr Ross’s predecessor as Scottish Tory leader, Ruth Davidson, backed his decision to call for Mr Johnson to quit, describing it as a ‘tough call to make, but the right one’.

He tweeted: ‘Given that the PM has now confirmed he attended a rule-breaking gathering, he has lost the confidence of the country, so I believe Douglas has made the right call and that the PM should stand down.’

Share. Facebook Twitter Pinterest LinkedIn Tumblr Email
Previous ArticleIndia reports nearly 250,000 new Covid-19 cases
Next Article “With the help of our ancestors and gods we will grow old together” – Nigerian traditionalist addresses naysayers who said her marriage ‘will end in tears’