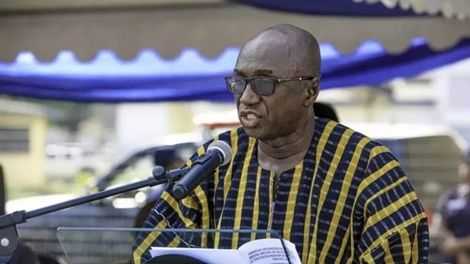 
Mr Ambrose Dery, Minister for the Interior, says timely information and intelligence sharing are critical to successful seizures of contrabands and arrest of perpetrators of illicit drug trafficking and organised crime.

The fight against such unlawful acts can further be strengthened through partnerships and collaborations. The ultimate goal of arrest is to secure successful prosecution leading to a conviction. We can only achieve that when we collaborate and work together,” he added.

Mr Dery made the comments on Wednesday during the official launch of Technical and Logistical Assistance for Ghanaian Authorities to Counter Drug Trafficking and Organized Crime.

The event was organized by United Nations Office on Drugs and Crime (UNODC) in partnership with Narcotics Control Commission (NACOC).

He said the launch of the project was a testament to the international community’s commitment to collaborate, strengthen and help to dismantle international drug syndicates and organized crime organizations in Ghana and Africa.

He said in most cases, money gotten from illicit drug trade was used to finance other illegal activities across the world, including extremism.

He said it was necessary to protect the youth from being involved in the unlawful act, adding that, “if we lose them to the use of drugs, it will cause a problem.”

Dr Amado Philip De Andres, Regional Director, West and Central Africa, UNODC, said West Africa was a region vulnerable to, and affected by, acute threats in terms of transnational organised crime, including the use of the region as a transit area for cocaine, heroin, cannabis.

He added that “we are working together to provide effective and balanced drug control solutions to protect health and livelihood, as highlighted in the Investment Area 1 of the UNODC Strategic Vision for Africa 2030.”

“As part of this initiative, we are also improving data collection and analysis in West and Central Africa and launched the World Drug Report 2022 with representatives of 16 countries, including Ghana, and Diplomatic missions.”

Mr Amado said the partnership between UNODC and NACOC with guidance from the US Department of States’ Bureau of International Narcotics and Law Enforcement Affairs (US INL), was to support the National Integrated Programme (NIP) to fight transnational organised crime and to strengthen the criminal justice system in Ghana.

He said the launch would pave way for the establishment of a minimum of five border posts among others for NACOC to expand its coverage in the fight against drugs.

“The first batch of 30 senior officers from Oti region, Ashanti region and Greater Accra, have been selected for an intensive Train of Trainers course at the end of August 2022 to ensure sustainability of the project,” he added.