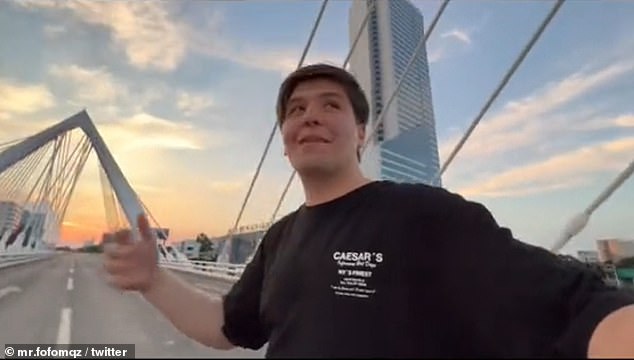 By Adry Torres For Dailymail.com

A TikToker who described himself as the ‘king of Mexico‘ grossly showed how far his wealth could go when he used his luxury car fleet to create a traffic jam on a bridge in Mexico.

The viral video that has been removed shows Rodolfo Márquez, who is known on the social media platform as Fofo Márquez, bragging that he was going to shut down the Matute Remus Bridge in Guadalajara.

Rodolfo Márquez, who is known on TikTok as Fofo Márquez and has over 800,000 followers, recorded a video bragging about what wealth can do in Mexico and used a fleet of three luxury cars to block traffic on the Matute Remus Bridge in Guadalajara last Thursday. The viral video was removed by Friday after it was condemned by social media users across several platforms

TikTok user Fofo Márquez used his three luxury sports cars to brag about how wealthy he was and why it allowed him to stop traffic on a bridge in Guadalajara, Mexico, on Thursday

A short while later, the three sports cars pulled up several feet from the entrance to the cable-stayed bridge, backing up traffic as the influencer celebrated the prank.

‘We have closed it for ourselves. This is what I want to demonstrate, what money and power can do,’ said Márquez, whose account is filled with videos about nightclubs, shopping and wealth exploits.

‘We’ve been here for several minutes. Let’s do some little TikToks. Look, look, look. This is power. Illuminati. People are starting to get upset. They’re honking at the Chrysler,’ he then added.

TikToker Fofo Márquez is captured on a cellphone video getting out of a Porsche moments before he brought traffic to a still on a bridge in Guadalajara, Mexico

Márquez pointed his cellphone camera at the empty road ahead and laughed as he recorded the motorists in the background waiting for his act to finish.

Mexican influencer Rodolfo Márquez, who goes by Fofo Márquez on social media platforms, brought traffic to a stand still on a Guadalajara bridge Thursday as part of a prank that showed how rich he is

The footage was posted Thursday and removed by Friday.

His actions were condemned by other social media users, including radio host Ramiro Escoto.

‘Affect hundreds… Or thousands, just to show that you have money,’ Escoto tweeted while adding that social media platforms are to blame for making people like Márquez influencers.