Ticket to America: Haitian migrants are gaining entry to the US with color-coded passes 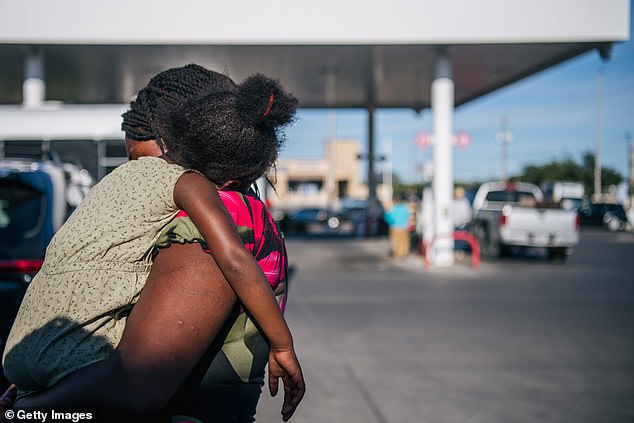 
Ticket to America: Haitian migrants are being DUMPED at a border gas station in the US after gaining entry to the US with color-coded passes: Up to 3K remain under the bridge and another camp has sprung up in Mexico

By Keith Griffith For Dailymail.com

US officials are using color-coded tickets to assign Haitian migrants for deportation or entry into the US, and are releasing many of the migrants at a gas station near the border that is used as a Greyhound bus stop.

Migrants with blue or yellow tickets, signifying families and pregnant women respectively, are being released, while single men with red passes and single women with green ones are slated for deportation, according to the Los Angeles Times.

Meanwhile, the Stripes gas station in Del Rio, Texas has become a major point for releasing those with blue or yellow tickets, as the business is used as a Greyhound stop for onward travel.

Large government-contracted buses drop off families twice a day at a gas station on a busy commercial road in the middle of town, according to the Washington Examiner.

A migrant mother carries her child while after being released at the Stripes gas station in Del Rio this week. The gas station is used as a Greyhound bus stop

A Haitian man in Mexico shows the blue ticket with the number he was given by authorities on the US side of the border. Unaware that blue and yellow tickets granted them entry into the US, many migrants with those tickets fled back to Mexico in fear of deportation to Haiti

Many migrants appear to be unaware of the meaning of the tickets, which are apparently not explained to them by authorities.

As the squalid migrant camp in Del Rio swelled to as many as 15,000 migrants last weekend, the Border Patrol issued them the color-coded, numbered tickets, then called their numbers and loaded them aboard buses and vans, some for expulsion flights, others for release.

Fearing deportation as the Biden administration began sending flights to Haiti, many migrants fled back across the border to Mexico, clutching the blue or yellow passes that would have allowed them to be quickly released.

The Biden administration has released at least 2,000 of the migrants despite vowing to expel them at the height of the crisis.

Mackenson Veillard was one of them, and was dropped off at the Stripes gas station earlier this week with his pregnant wife.

They waited together for a Greyhound bus to take them to a cousin in San Antonio after receiving their color coded-tickets to enter the US.

Migrants seeking asylum in the U.S. board a bus to Houston after being released from U.S. Customs and Border Protection, in Del Rio on Thursday

A migrant woman receives her bus ticket before boarding a Greyhound bus to San Antonio, Texas on Wednesday in Del Rio, Texas

The couple had spent a a week in the cramped migrant camp under the International Bridge, sleeping on concrete and getting by on bread and bottled water.