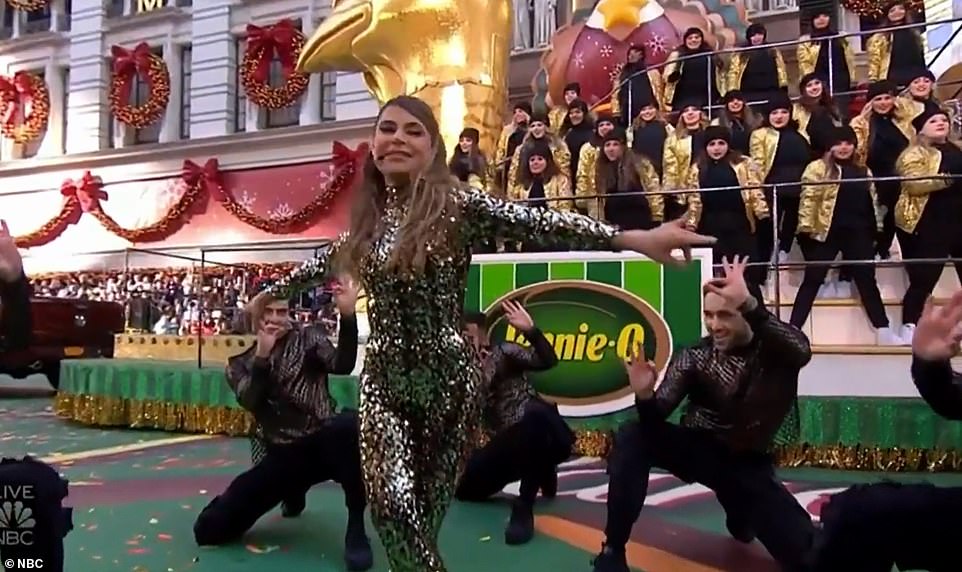 With temperatures rising to a high of 50 on Thursday morning along with clear skies, spectators should have a clear view of the 16 giant balloon characters set to fly at 9 a.m.

Rather than eyes fixated on the skies, however, spectators were fixed on Abdul’s energetic performance of her hit, ‘Straight Up,’ as the 60-year-old proved she can still awe audiences.

While all eyes were on Abdul, viewers may notice the absence of The Today Show’s Al Roker, who will miss the event for the first time in 27 years after being hospitalized for blood clots.

Among those wishing Roker a speedy recovery was President Joe Biden and First Lady Jill Biden, who called into the show as they also thanked first responders and the troops.

Abdul took the streets with a dazzling performance of her pop hit, ‘Straight Up,’ as the 60-year-old finished an energetic tap dancing routine that wowed audiences

Snoopy is the most prevalent character at the parade, featuring his iconic astronaut outfit. It is 49 feet tall

Among the most popular balloons hitting the streets was Spongebob Squarepants. The float is 44 feet tall or as high as a four story building and as wide as seven taxi cabs

Following closely behind was The Pillsbury Doughboy (above), who towers at 46 feet tall and 34 feet wide

Among the characters taking to the skies was The Boss Baby, seen soaring as spectators looked on from their balconies. He is one of the taller balloons at a whopping 48 feet tall and 28 feet wide

Along with the balloons, 28 floats will be making their way to Herald Square. Pictured: Lego’s Brick-Changer float

Notably missing is Today Show host Al Roker (pictured), who will be absent for the first time in 27 years after being hospitalized for blood clots

Despite Roker’s absence, the show went on without the popular host as Broadway singer Lea Michele kicked off the festivities with a performance of ‘Don’t Rain on My Parade’ from her Broadway Show ‘Funny Girl.’

Along with the iconic balloons, the parade will also feature 28 floats, 12 marching bands, 700 clowns and several music stars are set to make their way through on Thanksgiving Day.

Organizers said the parade will begin in the city’s Upper West Side and end at Macy’s iconic store at Herald Square.

The attendance is predicted to include 500,000 more people than last year. The 2020 parade was a TV-only festival due to the pandemic.

This year’s parade premiered ‘Striker the U.S. Soccer Star’ in celebration of the World Cup

Among the newest balloons hitting the skies will be popular Grogu from the Star Wars franchise. The massive balloon is 41 feet tall, 29 feet long, and 37 feet wide

Returning to the Thanksgiving Day Parade was the Goku float, seen making its way through Manhattan. This balloon is among the biggest at 56 feet tall, 70 feet long and 36 feet wide

The PAW Patrol balloon could be seen towering above as people stared from their balconies. The balloon is 43 feet tall

Among the other celebrities at the show were Pitch Perfect: Bumper in Berlin starts, including Adam Devine (center)

Performers in the parade include Paula Abdul, Sean Paul, The Roots, Jimmy Fallon, Jordan Sparks, Sesame Street, Big Time Rush, and Gloria Estefan, who will appear with her daughter and grandson.

Mariah Carey is set to be the grand finale performer as she performs ‘All I Want for Christmas Is You’ at the Macy’s store in Herald Square.

Michele wasn’t the only Broadway star to hit the streets as other performances included ‘A Beautiful Noise,’ ‘Some Like It Hot,’ and, in celebration of its 25th anniversary, Disney’s ‘The Lion King.’

Along with giant balloon classics like Ronald McDonald, this year’s parade will premier ‘Striker the U.S. Soccer Star’ in celebration of the World Cup. Some of the balloons are as high as four-story buildings.

Snoopy was among the many mainstays of the parade, appearing in his NASA suit as the longest-running character to appear at the Thanksgiving Day Parade.

Along with the balloon characters, spectators are also eager to see the iconic Tom Turkey and Santa Clause floats as they mark the start of the holiday season.  Riding the Tom Turkey float was comedian Mario Lopez and his family.

Pictured: Kids in flower costumes sing along as they take part in the annual Thanksgiving Day parade

Despite the jolly energy surrounding the parade, many were still upset by the absence of Roker, who has hosted the event for 27 years.

Among those bummed by a parade without Roker included President Joe Biden and First Lady Jill Biden, who wished for the host’s quick recovery as they called in to the parade show.

The First couple also gave thanks to America’s first responders and troops. They said their holiday plans include a family dinner and walk on Nantucket beach.

Along with Snoopy, one of the oldest balloon characters include Ronald McDonald (pictured)

The First Couple also called in for holiday wishes, noting they, too, were disappointed that Roker was not hosting

As in years past, the New York Police Department blocked off all vehicle access points to the parade route with sand-filled garbage trucks, and other heavy vehicles.

Police presence has also been ramped up given recent shootings in the nation and threats against New York’s Jewish community.

‘In light of recent events, specifically the shooting in the nightclub in Colorado Springs and the arrest of two individuals for posting threatening statements online to Jewish targets, the counterterrorism bureau will deploy additional resources to ensure that festivities across the city are safe for all,’ Assistant Chief Martine Materasso, who heads the NYPD’s Counterterrorism Bureau, said at an Upper West Side press conference.

As in years past, the New York Police Department blocked off all vehicle access points to the parade route