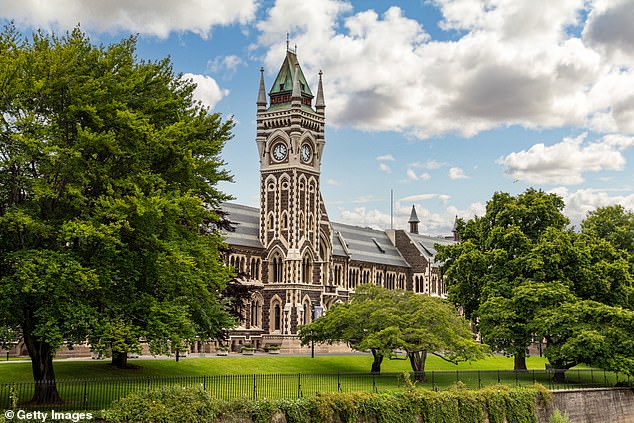 A woman shut down the graduation celebrations at a New Zealand university with a series of detailed bomb threats – all to prevent her family from finding out she had failed her exams.

The woman, aged in her early 20s and whose name has been interim suppressed, had been struggling with her mental health and grades since moving to New Zealand after being a top student in primary school.

Her grades suffered throughout high school and only got worse when she got to university.

She failed her first year twice and was suspended from enrolling for a third time.

It was after that that she decided to send the threats from a computer in a public library, the court heard, Stuff reported.

Otago University were forced to suspended its December, 2020 graduation celebration as a result of the warnings that the facility’s chancellor said were deeply disturbing.

‘Dear University of Otago. Since you c***s have suspended me I’m going to ruin your graduation with some firearms and a little touch of explosives. The town hall will make quite a boom,’ she wrote in the threatening emails.

‘I will make the mosque attacks look like child’s play … Are you going to take the gamble?’

The court heard the woman, who takes medication for anxiety and depression, and was struggling with the pressure of returning to her parents without a degree.

She at one stage attempted to take out a bank loan to buy a fake graduation certificate after university rules prevented her from enrolling a third time after consecutive failures.

As a result, the woman decided to make the threats to Otago University, creating several email accounts including ‘far.right’ and ‘white.supremacy.rocks’.

The first threat was titled ‘Beware, gun attack at graduation ceremony’, which was sent on December 7, 2020.

The next threat referenced the shocking mass shooting at the Al Noor Mosque in Christchurch on March, 2019 that saw 51 people slaughtered by a white supremacist terrorist.

The university subsequently cancelled its graduation ceremonies at the last minute, which destroyed the dreams of graduates and cost families and the instutition an estimated $1.3million in travel and organisational costs.

‘The cost was far beyond what money could buy,’ Judge Claire Ryan said.

The woman sobbed in Auckland District Court on Thursday through the two-hour sentencing, where the judge questioned why she hadn’t simply spoken to her family about her struggles.

‘Your parents, family and friends were proud of you, and you were too frightened to tell them of your failures,’ Judge Ryan said to the woman.

The woman’s application for no conviction to be recorded was rejected by the judge because of her use of references to the Christchuch terrorist attack and white supremacy terminology.

She also rejected a permanent suppression of her name, with the interim suppression to expire later this month.

The woman was sentenced to five months community detention and nine months supervision.