This is what Biden didn’t see at the border during three-hour visit: Migrants assembling to cross 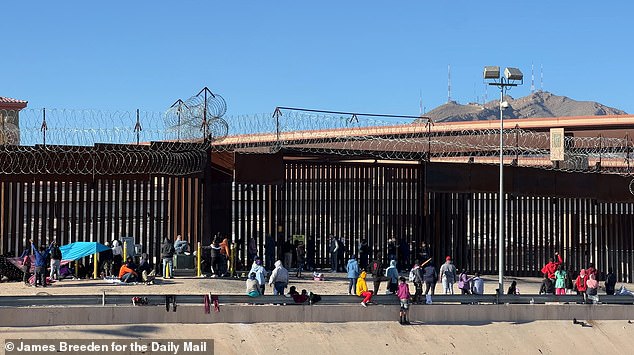 
President Joe Biden came closer than he ever realized to hundreds of illegal migrants who had just set foot on American soil during his border trip on Sunday.

As his presidential motorcade sped along closed roads from one carefully stage-managed facility visit to another, he came within a few dozen feet of migrants lining up on the wrong side of the border fence.

They sent up a cheer as Biden’s convoy race past above them even though he would almost certainly have been oblivious to their presence.

It marked an ironic twist to a whistlestop tour of border facilities in El Paso, where the president was kept well away from streets where he might be able to see migrants at large in the city.

Migrants gather by the border fence around El Paso after crossing the Rio Grande into U.S. territory. Here they wait for border agents to open a gate and begin processing them

The episode echoes Republican criticism that the visit was little more than a photo op at the border.

And it comes amid claims that El Paso — the epicenter of a migrant surge last month — had been cleaned up before Biden’s visit.

In all the president spent three hours on the ground near the border, meeting officers and charities that help migrants.

He was not seen meeting any migrants, however.

After visiting the busy port of entry on the Bridge of the Americas, connecting El Paso to the Mexican city of Mexican city of Ciudad Juárez, Biden was driven to his next stop at the El Paso County Migrant Services Center.

The convoy of police vehicles, SUVs and buses carrying staff, Secret Service agents and journalists traveled at high speeds along roads that were closed to regular traffic.

The 21-minute journey took them past the well-fortified border, where Texas National Guard troops have been deployed to stem the flow of migrants.

But the vehicles were clearly visible to migrants on the other side of the border fence.

Some 200 people had just made the crossing from Mexican territory, across the muddy water of the Rio Grande, and had gathered on U.S. soil at a gate in the fence as they waited for Border Patrol to let them through.

This is how the complicated business of processing at the border works.

Arrivals are brought inside the fence by border officers, who then have to process their claims of asylum and decide who is being expelled immediately and who gets to make their case to a judge.

The shabbily dressed new arrivals — mostly men, and mostly without any possessions — were not part of the Biden tour.

Instead, he met local officials at the airport and was then taken to the Bridge of the Americas for a close-up look at the border and a bustling port of entry.

He watched border officers demonstrate how they search vehicles for drugs, money and other contraband.

A yellow Labrador was shown detecting fruit and meat in a vehicle, before a chocolate Labrador retrieved what appeared to be a package of drugs from another car.

As he toured the port of entry, a sign reading, ‘Bienvenido a Mexico,’ could be seen on the far side of the border.

From there it was past the fence, and on to the El Paso County Migrant Services Center to hear about the services that were offered to new arrivals.

He asked how many people came through the center and was told about 300 to 500 a day, although it sometimes reached as many as 1000.

POTUS asked how many folks you have coming through?

Told it varies. One of the people said the average per day was about 300-500 migrants per day but that they have peaks of about 1000 per day at times.

Republicans denounced the visit as a carefully managed photo op, and pointed to reports that the city of El Paso had been cleaned up in advance.

During his tour Biden was shown how border officers search vehicles for drugs, money and other contraband at the El Paso port of entry on the Bridge of the Americas

Biden was shown a fake battery that was used in an attempt to smuggle drugs into the U.S.

Biden was greeted at the airport by Greg Abbott, the state’s Republican governor, who handed him a letter denouncing his border policies.

‘Your visit to our southern border with Mexico today is $20 billion too little and two years too late,’ it said.

‘Moreover, your visit avoids the sites where mass illegal immigration occurs and sidesteps the thousands of angry Texas property owners whose lives have been destroyed by your border policies.’

Representatives of border agents said it was impossible for the president to see the real picture during such a brief visit, which was a little more than three hours.

Brandon Judd, president of the National Border Patrol Council, which represents 18,000 agents, said: ‘You’re barely going to get the scope of what is happening.’

Gov Abbott handed this letter to Biden at El Paso airport, ensuring a frosty welcome to Texas on Sunday as the president made his first visit to the border since taking office