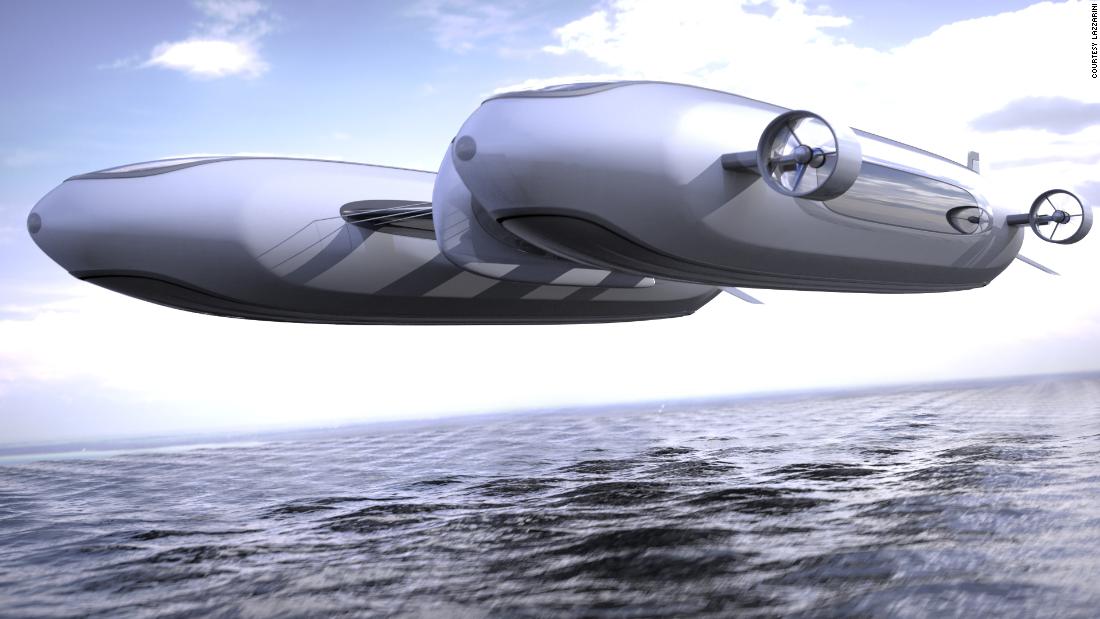 
Editor’s Note — Sign up for Unlocking the World, CNN Travel’s weekly newsletter. Get news about destinations opening and closing, inspiration for future adventures, plus the latest in aviation, food and drink, where to stay and other travel developments.

(CNN) — Why build a superyacht that just moves on water when you can create one that flies through the air as well?

Rome-based design company Lazzarini Design Studio has dreamed up a new concept named Air Yacht that has the ability to “sail in the sky” as well as the ocean.

Renderings of the Air Yacht were released earlier this month, and the futuristic design looks every bit as outlandish as it sounds.

Constructed from carbon fiber, the enormous structure will be equipped with two blimps filled with compressed helium, enabling it to take to the skies at 60 knots for more than 48 hours a time “without emissions,” according to the design team.

A rendeing of Air Yacht, a new concept from Lazzarini Design Studio that will “sail in the sky” as well as the sea.

In addition to its apparent flying capabilities, the Air Yacht has also been designed to sail “quietly” on the water at an estimated speed of five knots thanks to its “inflatable basements,” which fill up with air when approaching water, thus allowing the vehicle to float.

“The Air-Yacht is pushed down from the rotation of the engines and can stand in the water through a depressurization of helium and ballast anchor system,” say Lazzarini.

The structure will take to the skies at 60 knots “without emissions,” according to the design team.

Containing a volume of 400,000 cubic meters of helium between them, the identical blimps are driven by eight counter-rotating motors powered by ultralight batteries and solar panels.

Aside from keeping the vessel in the air, and on the water when necessary, the floating structures will also hold a total of 10 passenger suites.

Both are connected to the central hull via four separate bridges, which passengers can walk across in order to move between the different areas on board.

The structure will also have the ability to sail “quietly” on the water at an estimated speed of five knots.

The master suite is based in the main hull, which measures around 262 feet, along with a spacious living room with a dining area and a swimming pool.

Conceived as a potential approach to “sustainable flying transportation”, it’s geared towards a private owner rather than “public transportation or touristic purposes.”

While Air Yacht is still in the early phases of the design process, a prototype will be launched this year.

Lazzarini hopes the project, which it says has already attracted a lot of interest, can offer a glimpse into what the future of private, sustainable travel might look like.

However, any potential buyers will need to have very deep pockets indeed. Its current estimated price tag is around €550 million ($621 million).

If a buyer is found, Lazzarini estimates that it would take around five years to construct Air Yacht and collect the helium needed for the project.

The central hull features a spacious living room and a swimming pool.

“We are currently seeking investors and partners able to fund the project in order to speed up the process,” a spokesperson for Lazzarini tells CNN Travel.

While it’s likely to be a while before we see Air Yacht taking to the waters, or indeed the skies, the studio is currently working with a private investor to engineer a 24-meter model prototype, which is scheduled to take off later this year.

Lazzarini estimates that it would take around five years to construct Air Yacht and collect the helium required.