The Block fraudster Emese Fajk is fighting the Russians in Ukraine 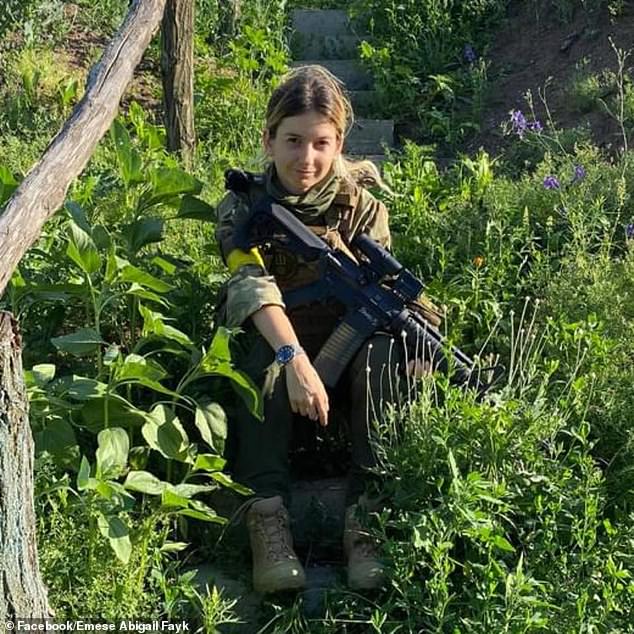 
An accused fraudster who won the auction for a house on The Block then failed to pay up is fighting Russian invaders in Ukraine.

Emese Fajk, 30, fled Australia after she was exposed as allegedly using fake ANZ Bank slips to fool the show into believing she could buy the $4.2 million home.

The Hungarian-born ‘international conwoman’ last popped up in Madeira, a Portuguese island chain off the coast of Morocco, last year.

She was living under the name Abigél Fuchs and accused of using the same scam on her landlord in Funchal, Madeira’s biggest city, as on The Block.

A year later, Fajk enlisted in the Ukrainian military to fight against invading Russian forces alongside hundreds of other international recruits.

Alleged The Block fraudster Emese Fajk, 30, is in Ukraine fighting the Russian invaders, even appearing in a promotional photo posing with an AR-15 assault rifle

Fajk even appears in a promotional photo posted on Monday by the International Legion of Defense of Ukraine, posing with an AR-15 assault rifle.

‘You can bomb our cities. You can’t bomb the resistance,’ text over the top of the photo of Fajk in camouflage reads.

Fajk two weeks earlier complained to a friend that she had been in Ukraine for three and a half months and was sick of wearing the uniform.

‘This is the “I’m tired of the Ukrainian uniform and I wear my own stuff” phase,’ she said.

Recruitment documents obtained by Daily Mail Australia show Fajk joined up on April 8, soon after the invasion begun on February 24.

The contract ‘of military service of foreign citizens and stateless persons’ stated she would serve in military unit A7420 and was signed by its commanding officer, Major Bodhan Molchanov.

Fajk used her real name and listed her address as being in Lisbon, the capital of Portugal, rather than the Madeira islands.

Recruitment documents obtained by Daily Mail Australia show Fajk joined up on April 8, and listed her address as being in Lisbon, the capital of Portugal

The contract ‘of military service of foreign citizens and stateless persons’ stated she would serve in military unit A7420 and was signed by its commanding officer, Major Bodhan Molchanov

A volunteer in her unit said Fajk was still calling herself Abigél and made familiar claims about her history to what she used in the past.

‘She claimed that she worked for the UN and Apple and she was living in Portugal having owned a Tesla and a Porsche Taycan in a penthouses before coming to Ukraine,’ the source claimed.

‘I have every reason to believe… she came to Ukraine to legitimate herself by joining the International Legion of Defense of Ukraine.

‘I am genuinely concerned about how her actions and behaviour will affect the reputation and operation of the legion.’

The volunteer said Fajk claimed to have a monthly income of €10,000 (AU$14,860) and goes by the callsign ‘Mockingjay’ on the battlefield.

Mockingjay is the same callsign for the legion’s newly minted communications director, who it on July 1 demanded all press inquiries be directed to.

The International Legion of Defense of Ukraine was set up by Ukrainian President Volodymyr Zelenskyy three days after the invasion began.

Gunning down Russians in military uniform is a stark departure from her carefree life in Madeira where she went deep sea diving almost daily.

Fajk found a hobby in deep sea diving during her stay in Madeira. On left she holds a diver’s log book and on right she takes a selfie in a wetsuit

In an April 15 email to her ex-boyfriend Steve Silva the accused Block scammer explained that she had to leave Australia ‘because it got to the point where I just couldn’t exist there anymore’.

‘Yes, you’re right, I’m hiding. Not from the law… If I was in trouble with the law, I wouldn’t have been able to leave (Australia). I’m hiding from my problems and my life,’ she confessed.

Mr Silva claimed Fajk pulled the same scam on her landlord in Madeira that she allegedly used on The Block’s producers in December 2020.

She is accused of sending her Portuguese landlord fake ‘proof of payment’ screenshots – just as she allegedly did to Channel Nine to ‘prove’ she could pay for Jimmy and Tam’s Palm Springs style Brighton home last year.

On February 18 last year – just days after publicly announcing she was ‘giving up’ on The Block house – Fajk left Australia for Europe.

Later that month, while setting up her new life in Madeira, she met cryptocurrency trader Steve Silva on Tinder.

‘(She said) she was working with Apple and the United Nations, the same crap,’ the ex-boyfriend in an interview.

‘She said she was a CEO and I was the first boyfriend she’d had who made more money than her.’

But their short-lived relationship took a turn after Fajk claimed that she’d gone into isolation because her landlord had registered a positive Covid test.

In WhatsApp messages, Fajk claimed she was going to the hospital to get tested. But a suspicious Mr Silva said he waited for Fajk to turn up there for ‘hours’ and she never showed.

As he waited, Mr Silva looked up the rental where Fajk was staying and found she had left a review with her normal picture, but an unfamiliar name: Emese.

A Google search of Emese’s name led him to discover a disturbing trove of news stories, including a series published by Daily Mail Australia last year.

‘I sat in the hospital’s café and was like, s**t, what did I get myself into?’ Mr Silva said.

Good place to escape to: The archipelago of Madeira (lower right, in green circle) is off the coast of Portugal and the north-western tip of Africa – far away from Australia

What Mr Silva discovered was that Fajk had repeatedly been accused of sending fake bank screenshots to acquaintances in the past.

Last December, she sent The Block’s producer Julian Cress screengrabs of her ANZ online bank account as proof that she had paid the $426,500 deposit and $4,072,951 final settlement for Jimmy and Tam’s Palm Springs style home.

Fajk has repeatedly been accused of using faked bank receipts

The money famously never arrived, with Fajk blaming an unnamed lawyer for the failed payment and claiming she didn’t have enough time to get the deal done.

Mr Silva soon learned that Fajk was – at that exact moment – accused of doing the same thing with her landlord in Funchal.

Her apartment’s owner – whom Daily Mail Australia agreed not to name – said Fajk recently sent him a screengrab showing an alleged $4,215 ANZ Bank transfer she had paid for rent.

But the money never came. All he has received is 200 Euro in cash.

Above is the ANZ Bank screenshot Emese Fajk sent to her landlord in Madeira, Portugal, recently, as proof of payment for the apartment she was living in

This is the ‘proof of payment’ Emese Fajk sent to Channel Nine last year as proof she had paid $4,072,951 to buy Jimmy and Tam’s property on The Block

A British ex-boyfriend said he received a payment slip showing she had transferred him £50,000 ($87,873) from Coutts Bank.

That money never arrived and an independent analysis showed the bank statement had clearly been photoshopped. (Fajk said the man’s claims were ‘vexatious and false’).

It also never arrived, despite Fajk claiming in messages that she had called her bank and was told transfers were taking longer than usual.

Mr Silva, Fajk’s new boyfriend, was enraged when he confronted Fajk about her alleged deception in WhatsApp messages last week. He warned her that she was ‘in so much trouble’.

Fajk then blocked him, he said.

Date night! Fajk shares a meal with her ex-boyfriend in Madeira above. On right, she smiles for the camera during another meal

In WhatsApp messages obtained by Daily Mail Australia, Fajk warned her landlord that Mr Silva had brought police to her apartment.

‘Steve is here with the police… I spoke to a lawyer, they can’t enter the building but the police won’t talk to me.

‘What he is saying is all BS but I don’t want to see any doors kicked in’.

The landlord replied: ‘Scammer!… You bailed without paying’.

On advice from police, Mr Silva last Friday emailed Fajk a formal demand asking she return the possessions to him by 6pm on Sunday or he would press matters further.

Fajk replied at 5.22pm that day: ‘I literally just saw your email. My lawyer will contact you tomorrow.’

No one has rang him since and he said the matter could take some time to resolve.

Fajk did not directly address several written questions posed to her by Daily Mail Australia, except to say she had nothing in her possessions that didn’t belong to her, deny she had ‘fled’ Australia and accuse her boyfriend of contacting the media to ‘pressure’ her.

She admitted ‘law enforcement and lawyers’ were involved in her current predicament.

As for Mr Silva, he said he is worried ‘this does not stop here – she will continue doing this in the next country that she goes.’