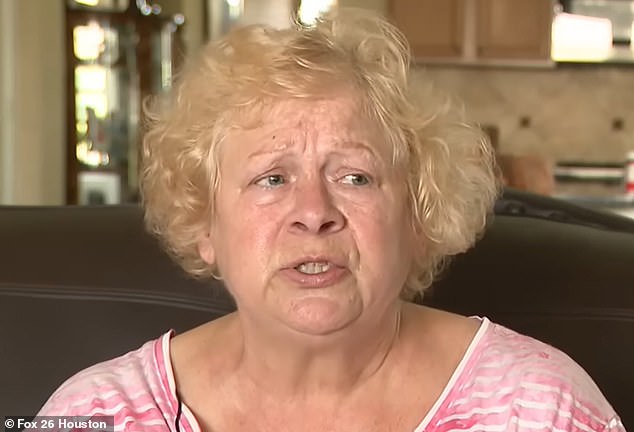 
A retired couple are being sued by their homeowners’ association for feeding neighborhood ducks after residents complained that they were causing a nuisance.

Kathleen Rowe, 65, and her husband George are now facing losing their $439,900 home in Cypress, Texas, because of the lawsuit.

They moved into the home after the death of their only child and found feeding the ducks was a therapeutic way of dealing with the loss of their adult daughter.

Kathleen cares for her 72-year-old husband, who suffers from multiple sclerosis, and the couple have lived in the area for eleven years.

But the couple are now being forced to sell their home to pay legal fees and potential damages after the Lakeland Community Homeowners Associated launched a bid to stop them feeding the birds.

The HOA filed the suit in June, claiming that they had enough of the Rowes feeding the ducks despite ‘repeated warnings’ for them to stop.

The suit, filed in Harris County Civil Court, is asking a judge for a ‘permanent mandatory injunction requiring Defendants to cease from feeding any wildlife’ in the neighborhood.

Kathleen told Fox 26 Houston that the association are ‘just a lot of very hateful type people who do not like ducks’ before adding ‘me I just love ’em’.

The HOA is seeking to be compensated for attorney costs, for the Rowe’s to be banned from ever feeding the ducks again in addition to monetary relief which would be capped at $250,000.

Kathleen Rowe, 65, has put her home in Cypress, Texas, up on the market after being issued with a lawsuit by the HOA. She and her husband George, 72, have been feeding the ducks for the past 11 years, and have refused to stop despite several warnings from the association

The couple could be forced to pay up to $250,000 in monetary relief to the HOA, as well as any attorney costs. Their suit, filed at Harris County Civil Court, is asking a judge for a ‘permanent mandatory injunction requiring Defendants to cease from feeding any wildlife’ in their nearby area

The ducks are visible on Google Maps from the couples home, with some neighbors being left angry that the couple are still feeding the birds. One accused the ducks of ‘tearing up’ everyone’s yards, but disagreed that the HOA should have sued the Rowes

Both Kathleen and George have said that they will miss the ducks ‘terribly’ if they are forced to move because of the lawsuit. Their lawyer, Richard Weaver, said that he will ‘put the HOA’s feet to the fire’ and force it to prove that the Rowes are violating the rules by feeding the ducks

Kathleen told the Houston Chronicle: ‘We didn’t have the $250,000, so we have to be prepared in case that’s what it’s going to cost.

‘They’ve never had a mother, I feel like I’m just stepping in. I’m going to miss them terribly.’

Her husband George added: ‘I’m going to more than miss them terribly.’

The HOA claim that feeding the ducks causes ‘imminent harm and irreparable injury’ to the Plaintiff, and the suit asks permission for the HOA to foreclose on the property if the Rowes continue to feed the ducks.

DailyMail.com has contacted the homeowner’s association for a comment.

‘I tried, I went three whole days of not feeding them, just trying to stay away from the ducks but they started coming across the street from the water way into my yard and basically crying.

‘They were starving these were the ones that people just dropped them off.

‘They’re just a lot of very hateful type people who do not like ducks, and me I just love ’em.

‘There is nothing in their bylaws that says you cannot feed the ducks. They never leave any corn behind.

‘It hurts it just hurts you know I’ve been loving these same ducks for years and if there is any way I can grab a couple of them and take them with me I will.’

Richard Weaver, the couple’s lawyer, has branded the litigation as the ‘silliest’ lawsuit that he has ‘ever seen.’

He added that ducks are common in the neighborhood, which has a creek running through it, and that the feathered animals can even be seen on street view in front of the couple’s property.

Weaver said: ‘I’m a board-certified real estate attorney, and this lawsuit is truly the silliest lawsuit I’ve ever seen in my practice.

‘This attorney has essentially claimed that feeding ducks is either noxious or offensive — I think that’s an incredible statement.’

Kathleen reportedly decided to start feeding the ducks because they were dumped in the wild after being born and raised in pet stores or by families for Easter events.

The lawsuit accuses the Rowes of violating four HOA rules, including one prohibiting ‘any noxious or offensive activity’ that could disturb other residents, and another barring any activity that may ‘materially disturb or destroy’ wildlife in the community.

Kathleen, who cares for her husband who suffers from multiple sclerosis, started to feed the ducks the corn after the death of their daughter. She said that she feels like she is their ‘mother’ and has been stepping in after the animals were dumped in the creek opposite her property

The bird lover claims that she did attempt to stop feeding the birds for a number of days, but they then just started coming over towards her property and were ‘crying’. She even hopes that if she is forced to move then she may be able to take a few of her beloved ducks with her

Weaver said he will ‘put the HOA’s feet to the fire’ and force it to prove that the Rowes are violating the rules by feeding the ducks.

He added: ‘I understand that maybe some people in the neighborhood want these ducks not to be in their community, but just from a human being perspective, we have worse things going on in the world.’

One resident, Matt Hill, told the Washington Post that he didn’t agree that the family should have been sued.

But he felt that the feeding was creating a problem, adding ‘They’re tearing up everybody’s yard.’

But Weaver is confident that the Rowes will not be forced to give up their home, and filed a motion to dismiss the lawsuit.

He said that the threat of foreclosure ‘frightened’ Kathleen, and she decided to put their home up for sale just in case.

Weaver added: ‘What she decided to do was beat the HOA to the punch by hurrying up and selling her home before anything bad could happen to her,’ Weaver said.

Weaver said he believes the couple would like to stay in the home if they win in court.

‘I think she would like to continue to live there and take care of these ducks.’