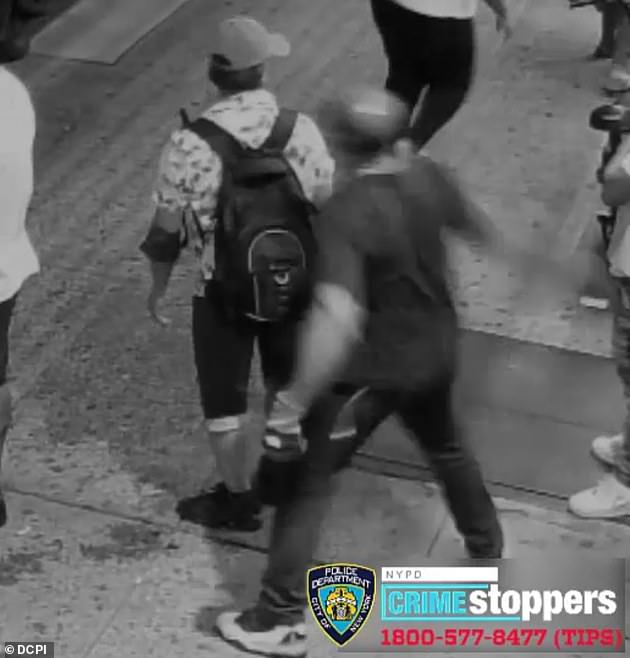 
A warped ‘knockout’ game which sees violent criminals punch strangers for fun is feared to have made a comeback in crime-ridden New York City.

Almost 20 of the violent and apparently motive-less knockout game incidents have been reported to the NYPD so far this year, including a Bronx man who almost died after being punched to the ground outside a restaurant.

Other knockout game victims include a 36 year-old man filmed being knocked out cold after being whacked over the head at a Brooklyn mall, and a 74 year-old woman slapped to the sidewalk in Midtown Manhattan earlier this month.

‘Knock-out games are back. The attack on New Yorkers is very real. We have to keep our heads on a swivel,’ retired NYPD officer Michael Alcazar, an adjunct professor at John Jay College of Criminal Justice, told the New York Post.

‘It’s not only the mentally ill who are committing these assaults. There are individuals who are angry, bored and brazen, who know they are not going to be prosecuted.’

He is referring to the city’s famously woke and lax bail laws, which regularly let serial offenders back onto the streets, emboldening many of them to commit even more crimes.

The phenomena first gained attention in 1992 when an MIT grad student Yngve Raustein was cold-cocked by a group of local teens in Cambridge, Massachusetts. The youths told prosecutors that the object was to floor a random stranger on the street with one punch. If unsuccessful, the puncher could be targeted for an attack by his witnesses.

Shortly before the attack Phu positions himself behind his victim, before raining down a vicious blow in front of a group of other people outside of the restaurant

Horrifying surveillance footage shows the victim, 52, crumpling to the floor as he is attacked from behind

Bui Van Phu, pictured, violated the terms of his life-time parole after a 1994 rape conviction

But the game has no set rules other than to inflict brutal and unprovoked violence on innocent bystanders.

It’s seen many incarnations and been called by various different names, like ‘knockout king’ ‘one-hitter quitter’ and, in the UK, ‘happy slapping.’

Whatever it’s called, the Post has counted 20 of these unprovoked attacks in the city so far this year. Felony assaults have climbed by 18.8 percent since last year.

Out of nowhere, Phu, who was convicted of a gunpoint rape of a 17-year-old girl in 1994, is seen on the video winding up behind Cortes and slugging him in the side of the head.

Cortes, who never saw the punch coming, crumples to the sidewalk, fracturing his skull. Doctors induced a coma to help with the swelling and after a dicey few weeks, he was finally taken off a respirator this week.

Across town in South Brooklyn, the vicious fisticuffs continued on August 20 when a 36-year-old man shopping in the Kings Plaza Mall was leveled in one fell blow by a seeming stranger.

Video shows a man standing in line for the ATM about 6 p.m. when an attacker approaches from behind, plants his front foot and pummels the unaware victim squarely on the right cheek.

A 74-year-old Asian woman, center, never saw her assailant coming, pictured on the left lunging at her target

The attacker, seen here, threw her bag over her shoulder and walked off as if nothing had happened

The victim appears to be knocked unconscious standing and falls to the floor without bracing for the fall.

The assailant walks away, but doubles back and surveys his handiwork before strutting off with his buddy.

The victim was hospitalized, but appears to be recovering.

It’s not just an outer borough phenomena, the game has found victims in some of Manhattan’s most upscale shopping districts.

On Wednesday, August 24, a 74-year-old Asian woman walking with a companion was smashed in the side of the face by a larger woman who appeared to have no previous interaction with her.

The blow sends the elderly woman stumbling to the curb where she finally collapsed before reeling into the street.

The attacker, who had been rifling through a gym bag before the attack, slung the satchel over her shoulder and proceeded down the sidewalk as if nothing had happened.

Images of ongoing NYC violence have stunned the United States and much of the rest of the world, and are feared to be hampering efforts to attract workers and tourists back to the COVID-ravaged metropolis.

Miller Vargas, 34, who was clocked in the face in Central Park in an random attack on August 20, in what he told the Post was the second unprovoked attack that he’s suffered this year.

‘I’m afraid to live in New York,’ the Columbia native told the newspaper.

New York State’s controversial 2019 criminal justice reform law was geared to prevent defendants without means from remaining in jail while their cases were pending, but police and prosecutors have complained that it has emboldened criminals.

‘It doesn’t matter if it’s a game or not. It’s just the way the streets are now,’ one veteran Brooklyn cop told the Post. ‘Perps think they can get away with anything, and most of the time they’re right. We arrest them and they get right back out.’