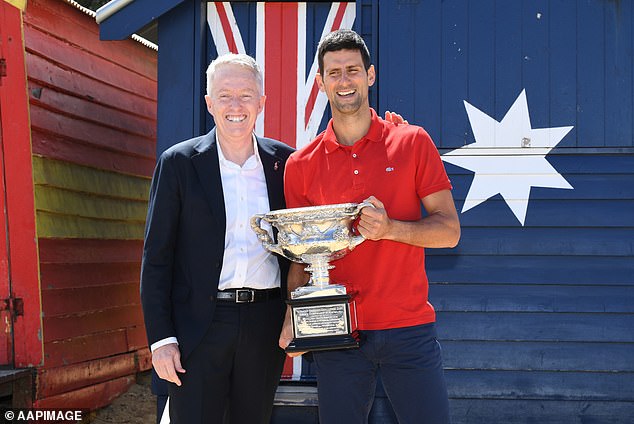 Tennis boss Craig Tiley has sidestepped questions about Novak Djokovic in a tense interview with the host broadcaster of the Australian Open.

The under-fire CEO of Tennis Australia and tournament director copped a grilling from Channel Nine’s James Bracey who repeatedly asked about his perceived mishandling of the Djokovic saga.

Tennis Australia has been widely accused of misinforming the world No. 1 about the criteria he needed to meet to enter the country as an unvaccinated traveller.

The 60-year-old tried awkwardly to brush over the subject before being asked if he plans to resign.

Craig Tiley with Novak Djokovic in February 2021. Tilley was booed by fans on Thursday as he made his first public appearance since the world No. 1’s visa debacle

Tiley bluntly said ‘no’ before changing the subject to the tournament and the Aussie players on show.

‘I am very focused today on delivering a great event,’ he replied.

‘I am proud of being able to stand up here and you can see what is behind us, I am proud of what the team has done and what we have delivered so far.’

Prior to the pointed question, Tiley was asked if ‘Tennis Australia did anything outside the guidelines provided regarding Novak Djokovic?’

He responded by saying ‘We already addressed those questions. Today we’re just focusing on delivering Day 4 and delivering a great event’.

Bracey followed up on the tense line of questioning asking if Tennis Australia received conflicting information regarding Novak?

‘Similarly we addressed that, we are moving on, focusing on the event and delivering a great two weeks of tennis,’ Tiley said.

Calls have grown for Tiley to stand down after an explosive email sent by Australia’s federal health minister warned Tennis Australia that a previous Covid infection would not see players granted a vaccine exemption.

The letter sent by Greg Hunt to Tennis Australia CEO Craig Tiley at the end of November emerged when the Serbian World No. 1 was detained by immigration officials upon his arrival in Melbourne on January 5.

‘The Australian Border Force has advised that people must be fully vaccinated, as defined by ATAGI (the national advisory body on vaccines) to gain quarantine-free entry into Australia,’ Mr Hunt wrote.

‘In relation to your specific questions, I can confirm that people who contracted Covid-19 within the past six months and seek to enter Australia from overseas, and have not received two doses of a Therapeutic Goods Administration-approved or recognised vaccine are not considered fully vaccinated.’

Tiley was also quizzed about rumours Tennis Australia was footing Djokovic’s legal bills during his 11-day battle to stay in the country.

‘I have seen those reports today and we don’t really go into the detail of financial arrangements that we have with players, but those reports are simply untrue,’ he said.

Now back home in Serbia, the 20-time Grand Slam champion is reportedly in talks with lawyers about suing the Morrison Government for more than $6million over ‘ill treatment’, The Sun reported.

The estimated figure for damages includes the prize money Djokovic would have won had the defending Australian Open champion won his 10th title in Melbourne.

‘It’s well known that Novak and his family feel he was poorly treated in the quarantine hotel in Melbourne,’ a close source said.

‘His mother revealed how it was full of fleas and maggots. He was kept a virtual prisoner.’