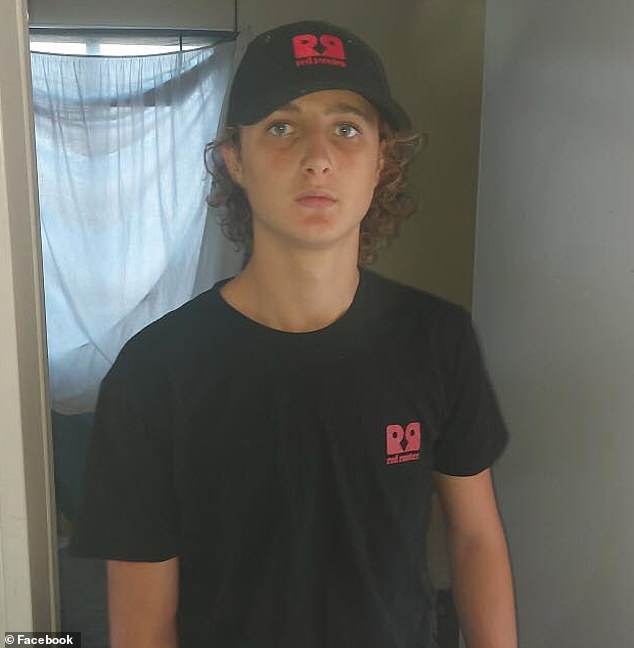 
Teen, 15, who died after he was electrocuted climbing near live power lines leaves behind devastated dad and three siblings just a few years after losing their mum

Family and friends of a teenage boy who died after being electrocuted by live power lines have shared their agony following the devastating loss.

Brandon Leach, 15, was climbing and swinging near the Aurizon train bridge, which runs across Auckland Creek in the Queensland city of Gladstone, on Thursday when he accidentally touched one of the live wires.

It’s understood the power pole that had the wire attached to it exploded, causing Brandon to plummet 10m into the creek below.

His heartbroken family have begun paying tribute to Brandon, who leaves behind his dad Rob and three siblings.

His grandmother Audra Leach revealed Brandon’s death was not the first tragedy to hit the family.

Brandon, 15, (pictured) was tragically killed after being electrocuted by live power lines in Gladstone last Thursday

‘Rob’s sons have been dealt severe loss in the past of their dear mum Jaymie succumbing to cancer a few years ago,’ she wrote on Facebook in an appeal for GoFundMe donations.

‘We are all devastated understandably, and we will be here in Gladstone for however long it takes.

‘We are expecting a long process and both Steve and I are off work indefinitely.’

Mrs Leach and her husband Stephen set up a GoFundMe for the family to help support the family.

‘We unexpectedly lost our grandson Brandon on Thursday in a tragic electrocution in Gladstone,’ Stephen Leach wrote on GoFundMe.

‘[We] are raising money to support our Robert and his 3 other children at this extremely difficult time.

‘We would really be grateful for any amount you could spare to help with this devastation and to help support them all.’

Mrs Leach said the family do not ‘usually ask for much’.

‘However this time we are reaching out to all of our friends and loved ones to dig deep and if you can afford to donate a small amount to help Rob,’ she wrote.

Tributes for Brandon and his family have since poured in online.

‘Brandon was a great kid to work with, he will be sadly missed by many. My condolences to his family and other friends,’ one GoFundMe contributor wrote.

‘Such a tragedy. This is the second teenager I know in Gladstone to lose their lives this way,’ another read.

‘My condolences to Brandon’s family and friends. Please take care of each other through this difficult time. He will always be with you in your hearts.’

The tragedy took place near the Aurizon train bridge, which runs across Auckland Creek in the Queensland city of Gladstone

Gladstone locals also took to social media to express their shock and extend their sympathies to the family.

‘What a tragic accident,’ one said.

‘I can’t imagine how hard this is to process. Lean and love on each other.’

‘I don’t know what to say, it’s just terrible news,’ he said.

‘Our hearts go out to the family and friends. I’ve got three children, I just can’t imagine what the family is going through.’

Aurizon is Australia’s largest freight rail operator, transporting more than 250million tonnes of commodities across the country each year.

The company also owns and operates one of the world’s largest coal rail networks, linking around 50 mines with three major ports in Queensland.

Popular Nollywood actress, Uche Ogbodo has called out men who claim they can never get…