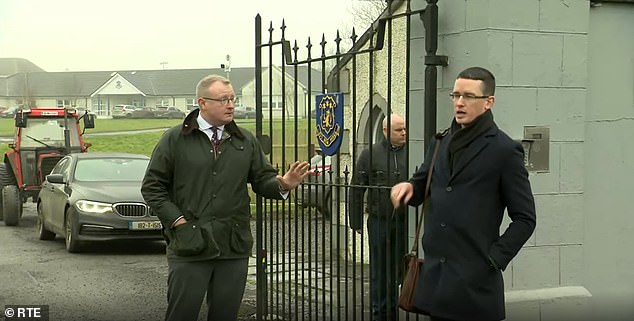 
Teacher Enoch Burke has been arrested for alleged trespass in a manner ‘likely to cause fear’ after returning to the school that has already dismissed him for gross misconduct.

Mr Burke, who has been involved in a long and ongoing battle at the High Court following his refusal to refer to a gender-transitioning student as ‘they’, was dismissed from Wilson’s Hospital School last week.

In a letter to him which emerged over the weekend, the student council told him his ongoing attendance at the school was causing huge disruption, was affecting learning and was a daily reminder to its LGBTQI+ students of the prejudice they experienced.

However, Mr Burke returned to the Westmeath secondary school yesterday – not just once, but twice.

Burke is pictured outside the gates at Wilson’s Hospital School in Co Westmeath. He turned up at the school in Multyfarnham this morning, despite being dismissed from his position at the school last Friday

Enoch Burke, who was previously jailed after failing to observe a court injunction banning him from attending Wilson’s Hospital school in Co Westmeath when he was suspended from work, was informed last Friday of his dismissal from his position as teacher

He first pulled up at the gates in a car driven by his father shortly after 8.30am.

Uniformed gardaí arrived at the school in an unmarked car at around 11.15am and were met at the door by school principal Frank Milling.

Mr Burke was arrested in the school courtyard and was taken to Mullingar Garda Station at around 12.30pm.

But after he was released by the gardaí at around 2pm, he was driven by his father straight back to the school.

The school gates had been closed by then, and while standing outside he gave his account of events to reporters.

He said: ‘The gardaí came to this school this morning, and they came down this driveway and they pulled up and they greeted the principal, and he ushered them into his office.’

Mr Burke said they spent 45 minutes in the office, ‘and then they came out to me and said, “We have made a decision that you are trespassing in such a way as is likely to cause fear.”’

He claimed the allegation was ‘totally preposterous’ and that it had been made without any observation of the situation.

Burke is pictured walking back to the school. Gardaí arrived at the school at 11.15am and left at 12.41pm, with Mr Burke in the back of an unmarked car

Enoch Burke (pictured on September 5 being brought into the Bridewell Garda station in Garda custody) was arrested in September for breaching a court order not to teach at his Westmeath school, or be physically present there

‘It is not trespassing to turn up at your place of work,’ he said. ‘I am an employee here and even the purported disciplinary meeting last week, that was conducted unlawfully… even that purported meeting with its purported dismissal wasn’t to take effect for months.’

‘I’m the meekest teacher at this school. I was simply standing outside the door because I was obstructed from going to work by the deputy principal.’

He said he had been told by gardaí that they were preparing to send a file to the Director of Public Prosecution.

He said: ‘All of this is because I won’t accept transgenderism. It’s absolutely preposterous. It’s really very sad.

‘I’m here to do my work, as every teacher in the country and every civil servant and every employee has an absolute right to do.’

He then entered the school grounds when the gates were opened to allow a schoolbus in.

When he reached the school he was confronted by Mr Milling, who told him to stop and to get off the property.

However, Mr Burke remained where he was and it is understood that gardaí were again called.

A message sent to parents informed them that the gates were locked ‘for security purposes’.

It said the situation was controlled and advised parents to delay collection of their child until a later time than usual. Just before 4pm, Mr Burke was collected by his father and driven away.

A Garda spokesman confirmed: ‘A male was arrested under the Public Order Act 1994 and taken to Mullingar Garda Station. He has subsequently been released pending the submission of a file to the Office of the Director of Public Prosecutions.’

Mr Burke had lost a High Court bid last week to prevent the disciplinary hearing, held by the school’s board of management, which resulted in his dismissal.

He is still awaiting a decision from Judge Brian O’Moore on an application from the school to have him fined or to have his assets sequestered – temporarily seized. The school had made the request in response to Mr Burke’s continued contempt of court in refusing to abide by a High Court order that he stay away from the school while he was suspended.

He had been placed on paid leave by the Co. Westmeath school in August, following his objection to a request that he call a gender-transitioning student by their newly chosen name and the pronoun ‘they’.

Mr Burke has said he could not do this, as transgenderism did not accord with his Christian belief that there are only two genders, male and female, and he raised his objections publicly at a church service and a dinner.

When he continued to attend the school last term, it went to the High Court to obtain an order to enforce his suspension.

His refusal to abide by that order led to a three-month stay in Mountjoy, before he was released at Christmas without purging his contempt.