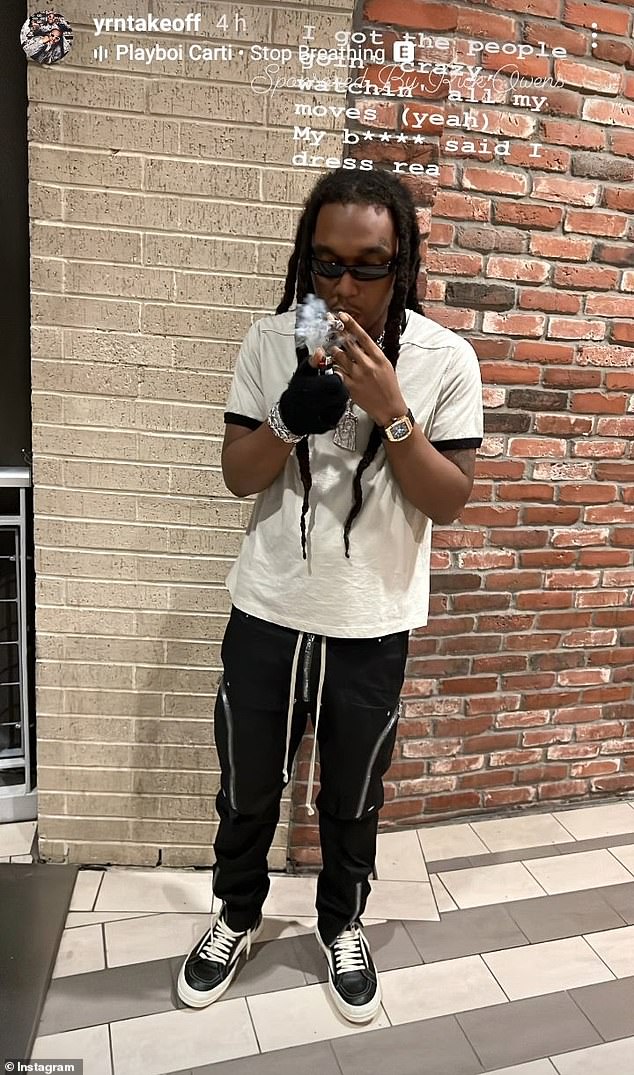 
Migos rapper Takeoff has been shot dead ‘over a game of dice’ in front of his uncle and bandmate Quavo outside of a bowling alley in Texas.

The 28-year-old, who is a member of the hip hop trio, was shot as a group gathered outside of the 810 Billiards & Bowling Houston at 2.30am this morning

Houston Police confirmed that one person was found dead at the scene at 1200 Polk, but would not confirm the identity of the deceased.

Images from the scene reportedly show the rapper lying dead in a puddle of blood after being ‘shot in the head’ during the row.

The shooting came hours after he posted an Instagram story of him wearing the same outfit.

Two other victims were also rushed to hospital in a private vehicle, and it is unclear what their conditions are.

Takeoff, real name Kirshnik Khari Ball, had joined his uncle Quavo for a game of dice before the shooting, witnesses and law enforcement sources told TMZ.

Horrifying footage from the scene show Takeoff lying on the floor, while Quavo rushes to his side.

A group started to gather around the injured rapper and tried to move him, but quickly lowered him to the ground as Quavo screamed for help.

Footage shows Takeoff lying dead on the floor, while Quavo – wearing an orange top – rushes to his side and yells for someone to help

Video of the incident shows several women shouting to ‘get inside’, while another man can be heard saying ‘I’m scared for you bro’

Video of the incident shows several women shouting to ‘get inside’, while another man can be heard saying ‘I’m scared for you bro’.

Migos was founded by Takeoff in 2008 with his uncle Quavo and cousin Offset – who is married to Cardi B.

Four hours before the shooting, Takeoff posted a picture of himself smoking at the bowling alley.

Quavo had also posted an Instagram story of himself driving around Houston with Jas Prince, who was celebrating his birthday.

Earlier this month, Takeoff and Quavo joined forces in their debut as a duo with their album ‘Only Built for Infinity Links.

While there have been whisperings of the Atlanta rap trio Migos splitting up for good, there has been no official announcement of their disbandment.

Quavo had also posted an Instagram story of himself driving around Houston with Jas Prince, who was celebrating his birthday hours before the shooting

Takeoff’s cousin and bandmate Offset is married to Cardi B, but the rapper and his uncle, Quavo released a track without the third member – sparking questions over their future

Instead, Takeoff and Quavo released ‘Only Built for Infinity Links,’ without the third Migos member, Offset.

While all three artists have previously released albums as solo artists during their time together, some fans are convinced that there is friction among the hitmakers.

The group’s 2018 Migos album Culture II debuted at number one on the US Billboard 200 albums chart.

This marked their second US number-one album following Culture, which featured their smash hit Bad And Boujee.

The family connection is strong within Migos, as Quavo and Offset are cousins, while Takeoff is Quavo’s nephew.

The group released their first mixtape, Juug season, in 2011, and a second one called No Label in 2012.

In 2013, Migos had their first hit, Versace. While the single peaked at number 99 on the Billboard Hot 100 singles chart, it gained a new lease on life when Drake remixed the song and added a verse of his own, even going so far as performing it at the iHeartRadio Music Festival that year.

In June of that year, Migos released their Y.R.N mixtape, which featured Versace. The following year, the group released a sequel to their No Label mixtape called No Label II.

The mixtape was a huge hit and has been downloaded nearly one million times and certified double platinum by DatPiff.

Share. Facebook Twitter Pinterest LinkedIn Tumblr Email
Previous ArticleWhen Biden Lost His Temper With Zelensky When He Asked For More Than $1billion | News
Next Article “There are evil eyes on social media monitoring your progress and casting spells and incantations on your pictures” – Businessman Wale Jana