Sydney nurse Steph Kelly, 25, hasn’t been able to eat or drink in four years due to nerve damage 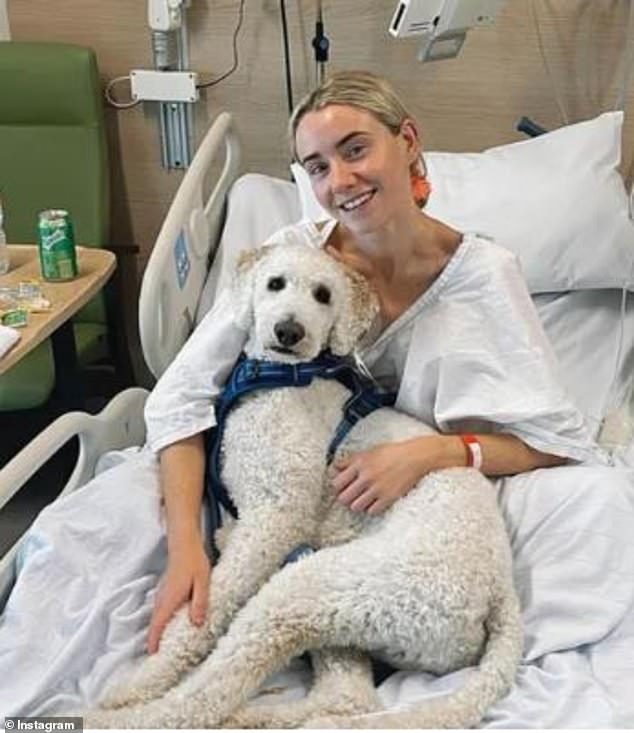 
A nurse and model has revealed how she has not been able to eat or drink for four years after a car accident.

Steph Kelly, 27, from Sydney, was involved in a car crash in 2018 that damaged her vagus nerve, which is responsible for the regulation of internal organ function.

Taking to TikTok to describe her condition, she said that she has suffered from gastroparesis and intestinal failure since, which mean she hasn’t been able to ‘fully absorb’ the meals she eats.

The gastroparesis stops food that enters her stomach from being digested, leaving her ‘very sick’.

Meanwhile, the intestinal failure means that anything that does leave her stomach goes into her intestines and causes blockages.

Since her accident, she has been relying on a medical technique called Total Parenteral Nutrition to survive.

Nurse Steph Kelly, 27, from Sydney, was involved in a car crash in 2018 that damaged her vagus nerve, which is responsible for the regulation of internal organ function

TPN is a formula that is fed through the bloodstream and gives her nutrients.

She said on TikTok: ‘The gastroparesis means that anything that I eat goes into my stomach doesn’t leave and makes me very sick.

‘And the Intestinal failure means that anything that does leave my stomach and goes into my intestines, causes blockages and doesn’t move and therefore doesn’t absorb.

‘It sounds crazy but I actually eat and drink through my heart.

‘The central line (also known as a Hickman) is inserted underneath my skin and tunnelled up underneath my collarbone and then into a large vein that sits then directly into my heart.’

She told Yahoo News Australia that TPN has ‘pretty much given me my life back’.

‘I didn’t realise the TPN would nourish me! I have so much more energy, I can go out and do things, I’m not fatigued,’ she said. ‘I’ve gained 10kg which is great because I’m at a healthy weight now.

‘I’m able to get married in June and hope to start a family with my fiancé Adam next year. I was able to walk Australian Fashion Week in May last year and I think they may be bringing me back this year to walk.’

However, the TPN treatment forces her to be attached to an IV drip for 16 hours a day and she is able to take it home.

‘TPN is mostly used in hospitals but I am lucky enough to have it at home, six nights a week,’ she added.

The method is also often ‘a last resort’ and ‘carries many risks’, doctors have warned her.

Since her accident, she has been relying on a medical technique called Total Parenteral Nutrition to survive

The treatment has also left her susceptible to other illnesses and infection and she revealed that she had three near death experiences from sepsis in 2022, leaving her in hospital for 12 weeks.

‘You can do everything right and then one tiny bug just gets into your bloodstream,’ she said. ‘I lost an organ from it, and was in ICU for a while.’

Ms Kelly said she still gets cravings and eats for social reasons and uses a Gastrostomy tube to fulfil her cravings, which drains out her stomach.

‘I don’t feel my hunger in the pit of my stomach, it’s kind of a mental craving, like if you’ve gotten your period and could really go for some chocolate,’ she said. ‘Or if Maccas bring out a new item, I’ll want to try that.

‘There’s no point eating vegetables and stuff like that because it won’t absorb, and junk food won’t cause me high cholesterol.

‘Because the food just sits there, I can normally leave it for one or two hours, maybe even four hours max, but it will eventually make me bloated. And even if I drain it out, I might have pain and nausea because it’ll make my stomach really unhappy.’