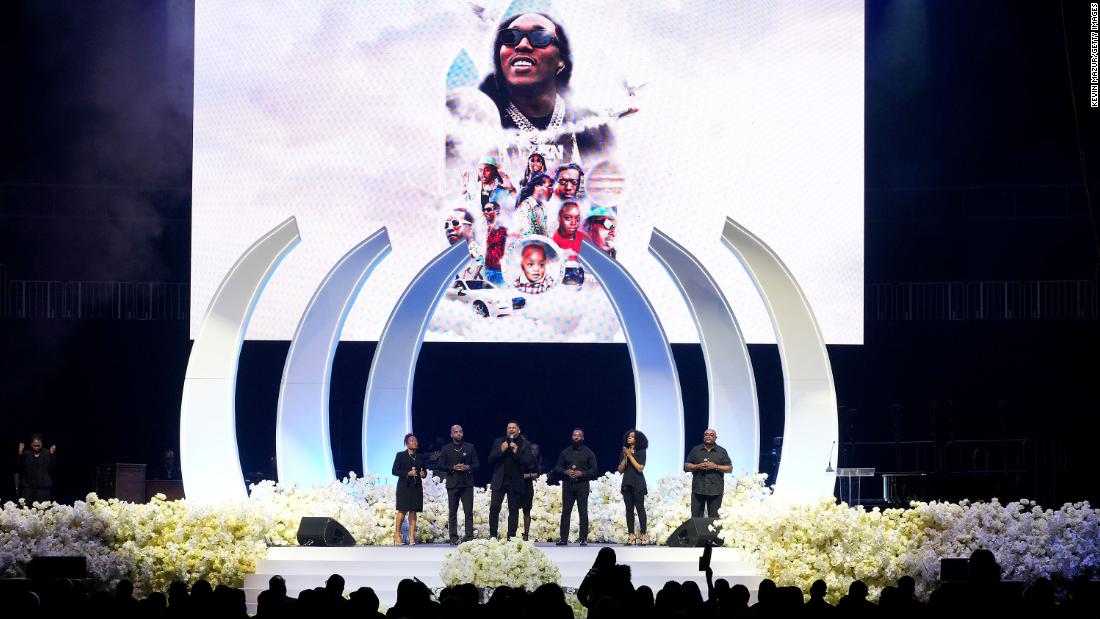 
Family and fans celebrated the life of rapper Takeoff at State Farm Arena in Atlanta, Georgia, last month in a three-hour, superstar affair.

The memorial service featured performances from Justin Bieber, Chloe Bailey and Yolanda Adams, as well as a poem by Drake, and words of remembrance from Atlanta Mayor Andre Dickens and the founders of Migos’ label, Quality Control Music.

Offset, who along with Takeoff’s uncle, Quavo, formed the trio known as Migos, struggled to compose himself remembering his bandmate, who he grew up with and considered a brother.

Takeoff is regarded by many as the best rhymesmith of the trio, and Jesse Curney III, pastor of the Lilburn church Takeoff’s family attends, shared a story that Quavo once told him about Takeoff’s sobriquet.

Where Quavo and Offset needed multiple takes to get their verses onto tracks, retaking and retaking until they got it right, Takeoff – the youngest of the three – would walk up to the mic and lay down his lyrics in one perfect take. “He was an introvert,” the pastor said, “but he trusted God” to not hold back.

Takeoff’s family members took the podium to offer fond memories of the humble, wise, peaceful young man who always wanted to be a rapper but never fretted over credit or the spotlight. Even as a baby, he had a unique voice, his mother, Titania Davenport-Treet, said.

“I could tell his cry from any other child,” she said, adding that God must have given him that voice because he always knew what he wanted to be.

He was quiet but always paid attention, family members said, and he never bothered anyone. He was the funniest guy in the room, and no matter how famous he got, he never stopped putting family first and making sure their needs were met, they said.