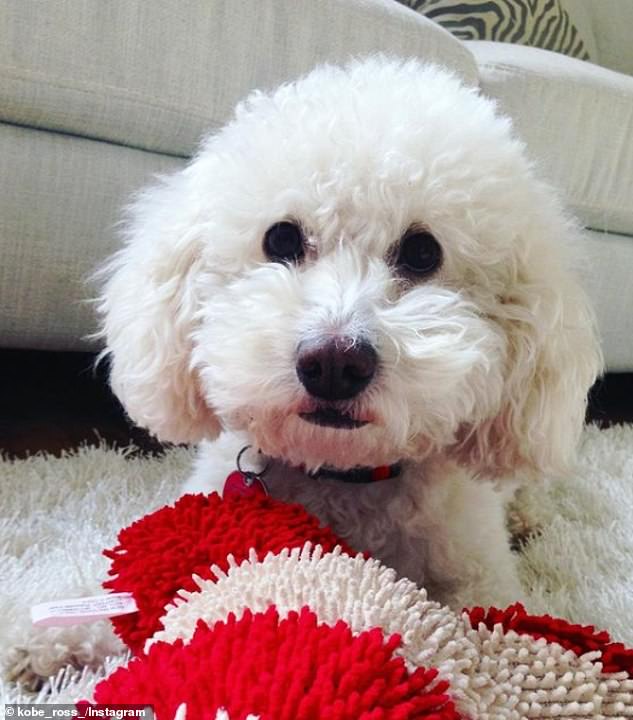 
A Pittsburgh woman has filed a new lawsuit against PetSmart over her toy poodle’s death, as surveillance video reveals the horrific moment the pup’s neck was crushed while being groomed in a 2020 incident.

AJ Ross said she is still traumatized two years after an incident that resulted in the death of her beloved 12-year-old poodle Kobe, while he was getting his nails trimmed.

But on Monday, the CBS sports reporter shared distressing surveillance footage from PetSmart on Twitter, hoping it would lead to permanent changes to grooming practices nationwide.

In the video, Ross’ poodle can be seen struggling against restraints on the grooming table inside the PetSmart in Pittsburgh’s East Liberty neighborhood on November 17, 2020.

Due to Covid-19 restrictions, Ross was not permitted to wait in the grooming area, so she left to run an errand nearby. When she returned, Kobe was lifeless on the grooming table. She rushed the pup to a nearby vet, but he could not be saved.

Ross filed a new lawsuit this week against PetSmart and two former employees, Julie Miller and Elizabeth Doty, claiming the tethers used on her dog led to his strangulation and death.

The lawsuit alleges the pup was ‘in obvious distress and panic,’ but neither woman did anything to help him. When they removed the tethers, Kobe collapsed. The two women face trial in October for animal cruelty charges.

While this has been an extremely traumatizing and emotionally draining process, my hope for justice in this case is inherently connected to truth and transparency. I believe/hope this video will encourage permanent changes to #PetSmart hiring and grooming practices nationwide. pic.twitter.com/FnFKsHJfhi

‘Kobe meant everything to me. I don’t have children, so he was like my child. He was literally like my shadow. Life without him has been weird because he was ever present,’ Ross stated

‘The civil case is just to bring accountability to this situation, justice if there can be any slim measure of that,’ Ross told KDKA. ‘But nothing is going to bring Kobe back.’

Elizabeth Doty and Julie Miller ‘began to trim Kobe’s nails and eventually turned all four of his legs to the side, suspending him over the surface of the table, in effect hanging Kobe by the neck while they trimmed his nails,’ lawsuit alleges.

But Ross says when she returned to pick Kobe up, he was lifeless on the table and the employees told her he had ‘passed out and went limp’ during the appointment.

‘I scooped him up and I ran out of the store… because I thought if I could just get him outside and get him some fresh air maybe he would start breathing again,’ Ross told Action News 4.

‘But he was just, like, lifeless in my arms’.

Ross rushed Kobe to a nearby veterinarian where he was pronounced dead.

A heartbroken Ross was told by PetSmart groomers that Kobe had ‘fainted’ as he was getting his nails trimmed.

‘He didn’t have a voice,’ she said. ‘There was no sense of urgency after this happened. I was lied to once I picked him up.’

The  sports reporter wasn’t convinced and demanded that she watch surveillance video showing Kobe being groomed.

The footage left her stunned.

In the video, Ross’ poodle can be seen struggling against restraints on the table inside the PetSmart in Pittsburgh’s East Liberty neighborhood on November 17, 2020

‘They had him tethered to a leash [one way] and tethered him to the end of the grooming table [the other way], so his neck was being hyperextended in different directions,’ Ross told KDKA.

According to Ross that caused Kobe to become suspended above the grooming table.

‘He was hanging for over a minute. He was struggling and being tortured. They didn’t do anything, they just kept cutting his nails.’

Ross previously Action News 4 that the two leashes that were tethering Kobe in different directions ‘extended his neck and choked him.’

In the lawsuit filed by Ross this week, she claims ‘PetSmart failed to take the necessary measures to eliminate and/or minimize such injury and harm to pets, including, but not limited to, improving training, supervision, and certification of its groomers.’

‘I hope that PetSmart overhauls their hiring and training practices,’ Ross added. ‘It’s very evident in the surveillance video that those two groomers seemingly had no idea what they were doing and didn’t care that my dog was suffering.’

Ross told KDKA that she wants other pet owners to be aware.

‘I’m not going to let this go unanswered,’ Ross said. ‘I want other pet owners to be aware and find people that are professionals and really care about animals instead of trusting a big box brand seems to not care about who they are hiring or how qualified they may be.’

The lawsuit also contends that PetSmart has shown a pattern of abuse and cites 47 incidents reported to Consumer Affairs regarding alleged injury and death caused by PetSmart groomers.

Ross called it ‘a pervasive pattern that needs to be rectified.’

‘The purpose, really, is to shine a light and force transparency in the hiring practices and training of PetSmart employees,’ Ross told the Tribune-Review. ‘I think the lawsuit vividly lays out how many dozens of cases have come to pass.’

In a statement to KDKA-TV, PetSmart said, ‘All of us at PetSmart are heartbroken by the loss of Kobe. Following an internal investigation, the associates involved are no longer employed by PetSmart. Out of respect for all parties involved, we have no further comment at this time.’

The employees have all been fired by PetSmart. The East Liberty location is pictured

Ross (pictured on assignment for CBS) remains heartbroken two years after the death of her beloved pooch, Kobe

The former employees are facing criminal charges following the incident.

Doty and Miller are both charged with two counts of cruelty to animals and two counts of neglect of animals. Their court appearance is in October.

Share. Facebook Twitter Pinterest LinkedIn Tumblr Email
Previous ArticleCalifornia’s Oak Fire destroys at least 41 structures as it burns more than 18,000 acres near Yosemite National Park
Next Article “I worked hard for it” – Pastor who was robbed of $1million jewelry while preaching in church defends his flamboyant lifestyle

The former deputy premier of NSW, John Barilaro, has got into a heated debate with…