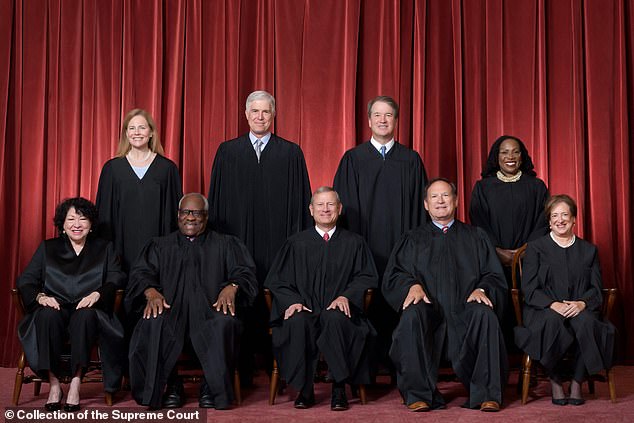 
After hearing two cases challenging affirmative action at colleges and universities on Monday, the Supreme Court could be poised to outlaw race-conscious admissions policies altogether.

Legal experts told DailyMail.com that the conservative-majority court will likely view the policy as a ‘racial checkbox’ and overrule it because it presents a ‘disadvantage’ to some students.

Specifically, the two cases brought before the high court deal with University of North Carolina‘s admissions policy and that of Harvard University.

‘The Supreme Court will likely hold that public and private universities cannot rely on the racial “checkbox,” but instead can only consider race as part of one’s experience–for example, in a personal statement,’ Law Professor Josh Blackman of the George Mason University School of Law told DailyMail.com.

‘I suspect Universities will adapt, and find ways to admit their desired number of under-represented minority students through other means.’

The Supreme Court has issued more that one decision in the past to safeguard affirmative action.

‘They are very deliberate in selecting the cases they hear. They pick cases with a view toward how they want to shape and influence American law across the country,’ Smith explained.

‘There doesn’t appear to be any reason for them to look at these two cases unless they intend to end racial preferences in college admissions.’

If they do, Smith said that all references to race on college sites and applications will likely have to be erased.

‘Any written references to race could potentially be used against colleges if they are sued in the future under federal civil rights laws. So, practically speaking, they will probably have to steer clear of race during the admissions process whenever possible,’ he said.

Linda Chavez, Chairman of the Center for Equal Opportunity, which specializes in race law, said the main takeaway from Monday’s court session was that neither school uses affirmative action ‘to boost diversity.’

‘The clear message out of today’s oral arguments before the Court is that neither Harvard nor University of North Carolina have sought race-neutral means to boost diversity,’ Chavez said.

Legal experts told DailyMail.com that the policy in regards to college admissions will likely be overturned

‘Instead, the schools use race as a proxy for disadvantage for black students, even for these who come from affluent homes, while ignoring actual economic disadvantage for poor white and Asian American students. It’s time to end this pernicious practice.’

Fox News contributor and George Washington University law professor Jonathan Turley told his outlet that it appears Students For Fair Admissions came out on top in both oral arguments – and noted their contentious nature.

‘This proved to be a full-contact oral argument for both the advocates and the justices,’ Turley said.

‘The challengers clearly had a better day before the court.’

The Supreme Court‘s conservative supermajority heaped skepticism on affirmative action-based college admissions policies on Monday in yet another case that could see the high court overturn its own precedent.

During the UNC case, Trump-appointed Justice Brett Kavanaugh suggested race-based admissions policies are ‘potentially dangerous’ while longtime Justice Clarence Thomas claimed to not ‘have a clue’ of what diversity means during the tense hearing.

Conservative activists are claiming that the 14th Amendment, which ended slavery and guaranteed all Americans equal protection under the law, means that governments and other such institutions cannot enact race-based policies – even if they aid people who have suffered from discrimination.

The universities have said they use race as only one factor in a host of individualized evaluations for admission without quotas – permissible under Supreme Court precedents – and that curbing the consideration of race would result in a significant drop in the number of students from under-represented groups.

A diverse school body is also prized by most college and universities as a more enriching educational experience for all involved.

But Kavanaugh told the lawyer defending UNC’s policy that ‘these racial classifications are potentially dangerous and must have a logical end point.’

‘When is your sunset? When does this end?’ conservative Justice Amy Coney Barrett asked about UNC’s consideration of race in admissions.

Thomas, one of two Black members of the court, said, ‘I’ve heard the word diversity quite a few times, and I don’t have a clue what it means.’

Activists demonstrate as the Supreme Court hears oral arguments on a pair of cases that could decide the future of affirmative action in college admissions, in Washington, Monday, Oct. 31

One case comes from University of North Carolina, while another is against Harvard University (pictured: Supreme Court Police hand out tickets to members of the public to attend oral arguments on Monday)

‘I didn’t go to racially diverse schools but there were educational benefits,’ Thomas added.

Conservative Chief Justice John Roberts said that if schools no longer are permitted to solicit applicants’ race through ‘checking a box’ on an admissions application as they now can, ‘maybe there’d be an incentive for a university to, in fact, pursue race-neutral alternatives.’

The court as recently as 2016 upheld a race-conscious admissions policy in a case involving the University of Texas, but it has shifted rightward since then.

But only the court’s three liberal justices appeared sympathetic to the schools’ cause on Monday.

The suits were filed separately against the two schools in 2014.

Newly-minted Justice Ketanji Brown Jackson (right), only participated in the UNC case because she previously agreed to recuse herself from Harvard’s

One accused Harvard of violating Title VI of the Civil Rights Act of 1964, which bars discrimination based on race, color or national origin under any program or activity receiving federal financial assistance. The other accused UNC violating the 14th Amendment.

Blum’s group has argued that the Constitution requires colorblind admissions.

‘The assumption that race necessarily informs something about anyone’s qualifications is antithetical to this court’s precedents and to our Constitution,’ Strawbridge told the justices.

New Justice Ketanji Brown Jackson, the first black woman to serve on the court, grilled Strawbridge about his definition of race-based admissions.

Jackson only participated in the UNC case, having previously agreed to recuse herself from Harvard’s.

‘You keep saying that you object to the use of race standing alone’ in deciding which applicants to admit, Jackson, told Strawbridge.

‘But as I read the record and understand their process, it’s never standing alone, that it’s in the context of all of the other factors – there are 40 factors about all sorts of things that the admissions office is looking at. And you haven’t demonstrated or shown one situation in which all they look at is race.’

Strawbridge asked the Supreme Court to overturn a 2003 Supreme Court ruling that held that colleges could consider race as one factor in the admissions process because of the compelling interest of creating a diverse student body.

The Supreme Court first upheld affirmative action in college admissions in a 1978 ruling that held that actions to achieve diversity were permissible but racial quotas were not.

Share. Facebook Twitter Pinterest LinkedIn Tumblr Email
Previous ArticleShatta Wale Denies Bulldog’s Management | Music
Next Article “I must train my child the way my mama train me, this country can’t tell me otherwise” – Ka3na expresses after getting weird looks for spanking her daughter.