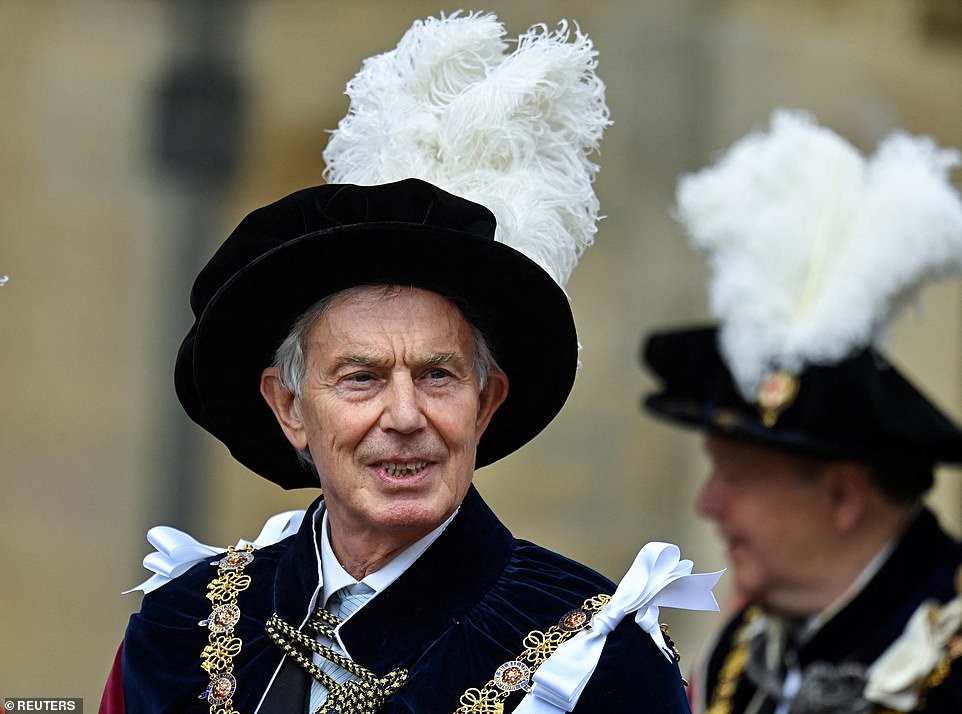 
Sir Tony Blair was all smiles today as he enjoyed the pageantry of the Order of the Garter procession as hard-left protesters set up camp outside Windsor Castle today.

The former prime minister was supported by his wife Cherie, and children Kathryn, Euan, Leo and Nicky who looked equally delighted at Mr Blair’s honour bestowed on him by the Queen.

But there was anger outside the castle’s walls where the Stop the War Coalition teamed up with members of the Free Assange group on the day the former prime minister was admitted to the Order of the Garter with 150 taking to the streets.

Dozens holding ‘Bliar’ placards that also compared him to Vladimir Putin gathered at the Queen Victoria statue outside the castle walls, where they chanted: ‘Tony Blair: war criminal’ repeatedly.

But their protest was in vain, after the Queen returned to duties for the first time since the Platinum Jubilee today to make him a knight at a Windsor investiture.

Mr Blair’s admission to Britain’s oldest order of chivalry was made personally by the Queen in January, 19 years after he led the nation into the Iraq War and 15 after he left office.

More than 1.5 million signatures were gathered on a petition calling for the knighthood to be ‘rescinded’, claiming he was the ‘least deserving person of any public honour’ and that he should be ‘held accountable for war crimes’.

Sir Tony’s predecessors bar one were all appointed to the Order of the Garter just after leaving office and claims have been made that his strained relationship with the Queen during his office might have contributed to the delay.   Sir Tony was prime minister during the Allied military invasions of Iraq and Afghanistan.

The Garter Parade usually sees the 96-year-old monarch lead members of the order from the castle to St George’s Chapel, though today the parade will be led by Prince Charles and Prince William. Prince Andrew has also been told not to attend the public part in case

Stop the War announced the plan to protest last week, saying ‘there is only one court that Blair should be attending, and it’s not the royal one’.

As well as the hard left, the decision was criticised by the families of those killed in Iraq, while more than 1.1 million people signed a petition earlier this year demanding his honour be revoked.

Nicky, Kathryn and Euan Blair at Windsor to support their father as he became Sir Tony Blair

Stop the War announced the plan to protest last week, saying ‘there is only one court that Blair should be attending, and it’s not the royal one’ (protester pictured today)

Members of the Free Assange group were also there, including this man dresses at the Queen

The Order of the Garter is the oldest and most senior Order of Chivalry in Britain, established by King Edward III nearly 700 years ago. Mr Blair’s admission has proved controversial

Dozens of left-wing activists came to protest against the Labour prime minister, who ran the country during the Allied military invasions of Iraq and Afghanistan

The Stop the War Coalition will gather a mob outside Windsor Castle, where the former prime minister is set to be admitted to the Order of the Garter.

Sir Tony has long faced a backlash over his decision to lead the UK into Iraq and Afghanistan, which cost the lives of 179 British personnel as well as many more civilians

Order of the Garter

Founded in 1348, it is the most senior order of knighthood, outranked only by the Victoria Cross and the George Cross. Membership, granted for public service or service to the sovereign, is limited to 24 living people plus the Queen and the Prince of Wales.

The Order of the Companions of Honour was founded on June 4 1917 by George V and it limited to just 65 members at any one time. Appointments go to those who have made a long-standing contribution to arts, science, medicine or government.

Two have been named in the latest list – former Labour MP and peer Frank Field, for public and political service, and Sir Paul Nurse, director of the Francis Crick Institute.

Order of the Bath (DCB/KCB/CB)

This recognises the work of senior military officials and civil servants.

This recognises service in a foreign country, or in relation to foreign and Commonwealth affairs, such as the work of diplomats overseas.

James Bond star Daniel Craig, was made a Companion of the Order, which is equivalent to a CBE and means he can use the post-nominals CMG, following his final outing as 007 in No Time To Die.

These are usually bestowed on people who have made a major contribution at national level, who can use the titles Dame and Sir.

Stop the War Vice Chair, Chris Nineham, said: ‘The rehabilitation of Tony Blair since the Iraq war is a scandal. He is widely recognised as a war criminal.

‘Our protest will be representing the millions of people who believe the only court Tony Blair should be going near is the Hague.’

Sir Tony has faced years of criticism over the Iraq War, culminating in the devastating report by Sir John Chilcot in 2016, which found that the former prime minister overplayed evidence about Saddam Hussein’s weaponry and ignored peaceful means to send troops into the country.

In a devastating set of conclusions, Sir John found Blair presented the case for war with ‘a certainty which was not justified’ based on ‘flawed’ intelligence about Iraq’s supposed weapons of mass destruction (WMD).

Blair then said he would ‘take the same decision’ to invade Iraq again if he was presented with the same intelligence as he set out a defiant defence after being savaged by the Chilcot report.

Sir Tony, who held the keys to Number 10 between 1997 and 2007, was appointed a Knight Companion of the Most Noble Order of the Garter, the oldest and most senior British Order of Chivalry.

Appointments to the Garter are in the Queen’s gift and made without prime ministerial advice, and are usually announced on St George’s Day, April 23, but the monarch can do so at any time, and has chosen to coincide with the New Year’s Honours.

They are for life unless a Knight or Lady Companion offends against certain ‘points of reproach’.

Founded in 1348 by Edward III, the Garter is awarded by the sovereign for outstanding public service and achievement.

It is said to have been inspired by events at a ball in northern France, attended by the king and Joan, Countess of Salisbury.

The countess is believed to have dropped her garter, causing laughter and some embarrassment.

The chivalrous king, however, picked it up and wore it on his own leg, uttering the phrase ‘Honi soit qui mal y pense’ – ‘Shame on him who thinks this evil’ – now the Order’s motto.

The Order’s emblem is a blue ribbon or garter worn by men below the left knee and by women on the left arm.

There are now 21 non-royal companions in the order out of a maximum of 24.

Each year, Royal Knights and Ladies of the Order of the Garter gather at St George’s Chapel in Windsor for a colourful procession and ceremony.

Watched by crowds of onlookers, they walk down the hill to the chapel from the State Apartments, dressed in blue velvet mantles, red velvet hoods, black velvet hats and white ostrich plumes.

The appointment has regularly been bestowed upon past prime ministers, with Sir John Major, Sir Tony’s predecessor, the last to receive the honour.

At the time it was announced in January, Sir Tony said: ‘It is an immense honour to be appointed Knight Companion of the Most Noble Order of the Garter, and I am deeply grateful to Her Majesty the Queen.

‘It was a great privilege to serve as prime minister and I would like to thank all those who served alongside me, in politics, public service and all parts of our society, for their dedication and commitment to our country.’

Sir Tony led New Labour to a landslide victory in 1997, winning two subsequent general elections before quitting Westminster a decade later, paving the way for his chancellor Gordon Brown to take over as prime minister.

The 68-year-old famously branded Diana, Princess of Wales, the ‘people’s princess’ after her death and was the UK leader during Allied military invasions of Iraq and Afghanistan.

The former barrister became a Middle East envoy and set up his own non-for-profit group, the Tony Blair Institute for Global Change, after leaving politics.