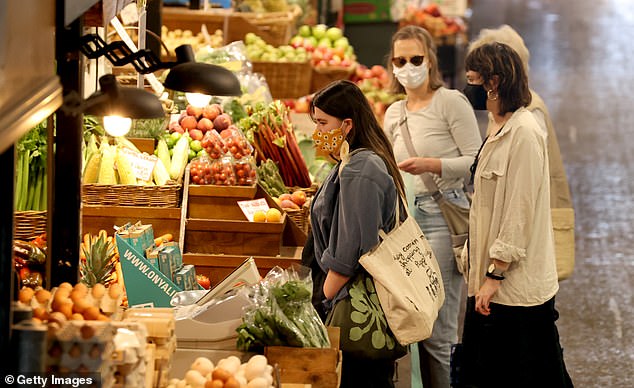 South Australia has recorded 3,493 new Covid cases as the premier reveals half of the patients being cared for in ICU are unvaccinated.

SA Premier Steven Marshall said the cases were a ‘slight uptick’ from the 3,246 cases recorded on Tuesday and the 2,552 infections detected on Monday.

There are currently 125 people hospitalised with the virus and 12 in intensive care, one of whom is on a ventilator.

Mr Marshall revealed half of the patients currently in ICU were unvaccinated and reiterated the importance of ‘crucial’ vaccines and booster shots.

South Australia has recorded 3,493 new Covid cases as the Omicron variant continues to spread across the state as ICU admissions remain steady (pictured, shoppers in Adelaide)

The premier remains confident the state’s hospital system can handle the increase in numbers thought to be the after-effects of New Year’s Eve celebrations.

‘We put some pretty harsh restrictions in place to make sure we didn’t have a super spreader event on New Year’s Eve,’ the premier said on Tuesday.

Mr Marshall told reporters that while four private labs were closed other centres shared the burden of an increased demand for swabs.

There were 21,097 tests conducted yesterday with the premier advising residents seeking a test that two of the four labs had reopened.

The state will soon evolve to rapid antigen tests in the place of PCRs in the case of people who are asymptomatic for the virus.

SA Premier Steven Marshall said the cases were a ‘slight uptick’ from the 3,246 cases recorded on Tuesday and the 2,552 infections detected on Monday (pictured, shoppers in Adelaide)

Mr Marshall stressed anyone with Covid symptoms like a runny nose, sore throat or fever should get a PCR test.

However, in the coming days close contacts will be able to use rapid antigen test and required to log their results to preserve PCR tests for those symptomatic.

Mr Marshall revealed rapid antigen tests would be given to close contacts for free.

‘That will just be for close contacts, not those people who are symptomatic in the general population. They are the ones we are really want to preserve our overall PCR testing capabilities for.’

The state received 250,000 of the ten million devices ordered yesterday with the premier assuring residents SA is not experiencing a shortage.

They will be used in hospitals and aged care settings but will not be made available to the general public.

The premier announced in coming days close contacts will be able to use a rapid antigen test and required to log their results (pictured, shoppers in Adelaide)

‘We’re expecting around a million rapid antigen tests for use within the state system every single week from now on,’ Mr Marshall said.

In lieu of the surge in infections across the state the premier remained steadfast that no restrictions would be eased in the coming weeks.

Health officials had been banking on one per cent of Omicron cases needing treatment in hospital with that figure already hitting 0.5 per cent.