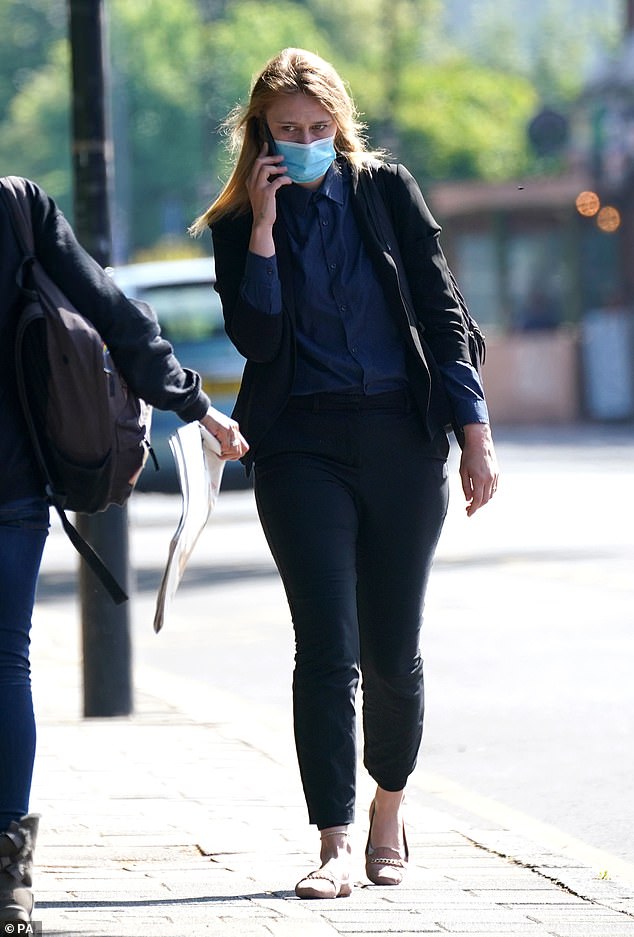 
A midwife who tried to save a baby girl who was later allegedly murdered by her parents told a court a social worker she alerted was ‘generally disinterested’ and even demanded ‘why are we even discussing her?.

Lily-Mai Saint George was just ten weeks old when she died from a serious head injury and had also suffered 18 rib fractures, two fractures in her leg and severe bruising.

Lauren Saint George and Darren Hurrell, both 25, allegedly shook their ten-week-old daughter to death eight days after she was released into their care despite the objections of hospital staff.

The parents both deny murder, manslaughter, causing or allowing the death of a child and cruelty to a person under 16 years old.

Lily-Mai was born prematurely in November 2017 and spent the first two months of her life in Barnet Hospital, before she was discharged into her parents’ care on 25 January 2018.

Saint George – who was described as having anger issues – and Hurrell had been homeless for several years and staff had tried to stop them taking Lily-Mai home, believing they were incapable of looking after her, jurors heard.

They were horrified when Saint George had told staff that she ‘hated’ the noises Lily-Mai made and wished she would ‘cry instead of groaning’.

And when they told one social worker they were worried the parents would not look after the baby, they said they felt they were not being taken seriously.

Lily-Mail died at Great Ormond Street Children’s Hospital on 2 February 2018, after being found unresponsive by her parents at their home in Belmont Road, Haringey, two days earlier.

She was 10 weeks and two days old and only two weeks past a normal pregnancy term.

Darren Hurrell arrives at Wood Green Crown Court, London, where he and Lauren Saint George are charged with the murder of their baby daughter

Midwife Marie Creighton told jurors, in a statement, about the attitude of the social worker in a professionals meeting on 16 January 2018 in which hospital staff discussed safeguarding Lily-Mai in the event of her discharge.

‘I remember her…sauntering in with a miserable look on her face.

‘She said she had been to Lauren and Darren’s flat and everything was fine and she didn’t understand why she was called into the meeting, “why are we even discussing her?”

‘She displayed a generally disinterested attitude.

‘We explained our concerns.

‘The social worker then began to change her attitude.’

Ms Creighton could not remember who the social worker was. A social worker named Theresa Ferguson was mentioned in the hearing yesterday.

Saint George and Hurrell arrived halfway through the meeting and the doctor present questioned them about how they would look after Lily-Mai if and when she was discharged, jurors heard.

Ms Creighton said: ‘I just sat there and realised that they would not cope.

Darren Hurrell arrived at Wood Green Crown Court, London, yesterday where he and Lauren Saint George are charged with the murder

November 21, 2017 – Lily-Mai is born prematurely and spends the first two months of her life in Barnet Hospital.

January 16, 2018 – Staff at the hospital Staff hold meetings with the parents when they talk about the care of Lily-Mai

January 21, 2018 – Another meeting is held where ‘concerns about the possibility of neglect’ are aired.

January 24, 2018 – Police are called to a domestic incident at Saint George and Hurrell’s flat in Haringey. Social worker Theresa Ferguson is informed and she makes a referral for a ‘legal gateway meeting’ which was the first step in intervening in Lily-Mai’s care.

January 25, 2018 – Lily-Mail is released into the care of both of her parents, despite medics’ concerns. Theresa Ferguson goes on holiday.

January 26, 2018 – Duty social worker Muriel Caboste visits the flat and decides there are not increased child protection issues. This is despite her noticing the parents were not following the feeding and medication chart that they had been provided with on discharge.

January 31, 2018 – Theresa Ferguson has returned from holiday and visits them at their flat to discuss the ‘legal gateway meeting’ and how to safeguard Lily-Mai. Saint George refuses to engage and storms out. Four hours later Saint George rings 999 and says Lily-Mail is seriously ill and she is rushed to hospital.

‘During this meeting while they were both in the room the smell of their body odour became apparent and became increasingly worse.’

Prior to this meeting, Ms Creighton expressed ‘grave concerns’ about Lily-Mai and the couple’s parenting skills, jurors heard.

‘I did immediately think they came across as a couple who needed extra care,’ she told the court in a statement.

‘They were both scruffy in appearance.’

After this first meeting, the midwife thought Saint George’s history ‘didn’t add up’.

‘Alarm bells were ringing in my head,’ she said.

Saint George attended all of her appointment pre-birth with Hurrell, the court heard.

‘Both came across as wanting the baby and seemed happy in the situation,’ Ms Creighton said.

On 21 November 2017, four days after Lily-Mai was born, Ms Creighton paid Saint George and Hurrell a visit at Barnet Hospital.

‘I told her well done for getting to 31 weeks,’ the midwife said.

‘Lauren replied something like, ‘No I’m having my dinner.’

‘Darren then told her dinner could wait and Lauren said, ‘Oh alright then come on.’

The trio went to see the baby, jurors heard.

Ms Creighton continued: ‘Lauren however just stood there with her back to the baby…moaning about finding housing, money.

‘Both myself and Darren told her to look at the baby and she may have glanced at her but I’m not sure.’

The midwife said she contacted the special care unit afterwards to enquire about how Saint George was getting on with Lily-Mai.