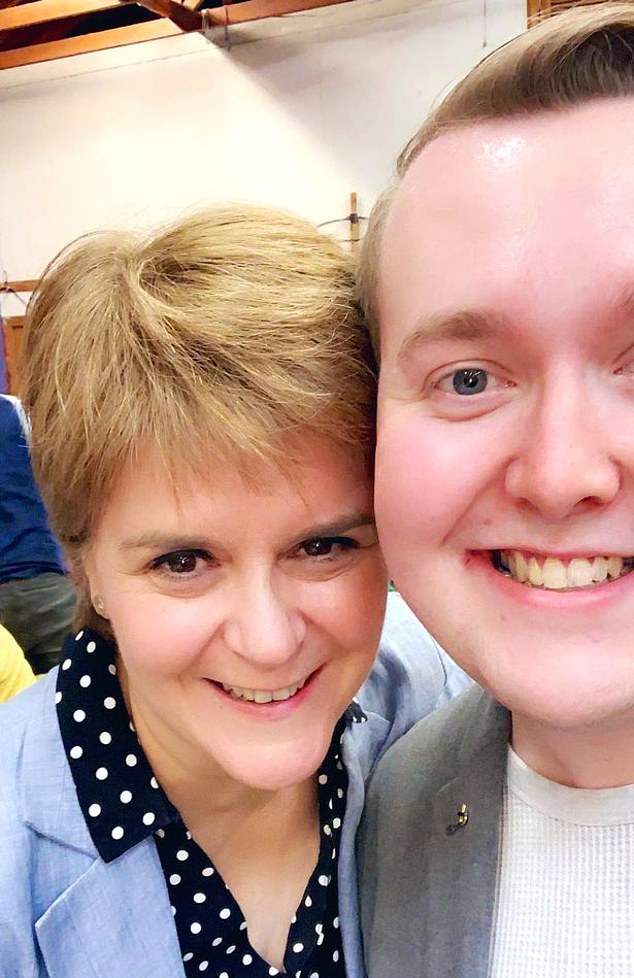 
SNP council chief, 27, quits over ‘sexual harassment of teenager at drunken party’ – as Nicola Sturgeon’s party is accused of ‘a rotten culture of secrecy and cover-ups’

By Tom Eden, Deputy Scottish Political Editor For The Daily Mail and Alice Giddings For Mailonline

An SNP council leader has dramatically quit his job amid claims of sexual misconduct.

North Lanarkshire Council leader Jordan Linden yesterday issued an apology for behaviour at a party he said had caused a ‘sense of discomfort’.

He is alleged to have made unwanted sexual advances towards a teenager at a drunken gathering in a Dundee flat after the annual Pride parade in 2019.

The SNP repeatedly denied there had ever been any allegation put to them about Mr Linden’s behaviour and threatened newspapers, warning them against publishing the story.

But the 27-year-old has now announced his resignation and expressed ‘regret’ about his conduct at the party.

It leaves the SNP facing renewed criticism about the ‘appalling’ way it handles complaints and potential misconduct.

Nicola Sturgeon has failed to address the alleged sexual misconduct of North Lanarkshire Council leader, Jordan Linden (right),  after he resigned from his position

The scandal comes just weeks after the party’s MPs rallied round sex pest MP Patrick Grady, who was found to have sexually harassed a 19-year-old staffer.

First Minister Nicola Sturgeon and SNP Westminster leader Ian Blackford have both failed to speak out about the alleged misconduct of the North Lanarkshire Council Leader.

The pair were also under scrutiny for the mishandling of the complaint against MP Grady.

This comes as Liz Truss and Rishi Sunak, who are battling for PM, both vowed yesterday to tackle sexual harassment.

Mr Linden became leader of North Lanarkshire Council following the local elections in May, having previously pulled out from running to become an MP in 2019 – days after the party in question.

In an email yesterday, Mr Linden wrote: ‘I want to make colleagues aware that I am resigning from my position as leader of North Lanarkshire Council today.

‘I accept that my behaviour at that party in 2019 caused a sense of discomfort which I entirely regret. I offered my apologies to the person concerned at the time and the matter was closed. I reiterate that apology today.’

Mr Linden told colleagues it was ‘the privilege of my life’ to briefly serve as leader for the council during its first ever time under SNP control and said it was ‘vital that there is no distraction’ from the work of the local authority.

He added: ‘The press coverage of this has placed an immense strain on me personally.’

The allegations against Mr Linden appeared in a Sunday newspaper. SNP HQ compliance officer Ian McCann was informed of the claim against Mr Linden shortly after the Dundee party and tried to reach out to the alleged victim, according to the Sunday Mail.

But the SNP has refused to answer questions about how much it knew about the incident, or whether it is going to suspend Mr Linden or launch an investigation into his behaviour.

Labour MSP Neil Bibby warned there was a ‘rotten culture of secrecy and cover-up at the heart of the SNP’. He added: ‘[Mr Linden’s] apology makes it all the more appalling that the SNP hierarchy were so willing to close ranks to protect him. The SNP cannot keep looking the other way and letting their scandal-hit politicians call the shots.

‘Their own activists have made it clear that they don’t have faith in the party’s complaints system.

‘The SNP need to overhaul this system, so that it protects victims instead of protecting the party.’

Conservative MSP Annie Wells said: ‘Jordan Linden’s resignation and apology are at least a partial acknowledgement of the distress he caused and his responsibility for it. That is more than other SNP members have done in similar cases.

‘But the issue here was never just about Mr Linden’s misconduct, but about the SNP’s reluctance to deal with serious allegations against senior party figures.

‘In this case, as in the Patrick Grady one, the party closed ranks and evaded questioning.

‘Above all, they sided once again with the perpetrator, rather than offer support to the victim.’

Scottish Labour is expected to push for Mr Linden to step down as councillor for Bellshill to trigger a by-election. However, he said: ‘I intend to continue to represent the people of Bellshill to the very best of my ability as a councillor.’

An SNP spokesman said: ‘The individual made clear to the SNP that the matter was resolved, and he would not be making a complaint.’