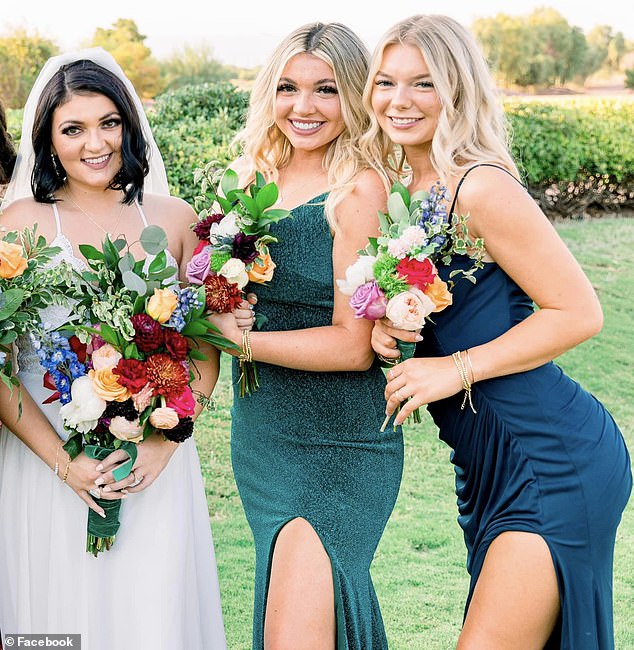 
The sister of murdered University of Idaho student Kaylee Goncalves has shared her relief that a suspect is finally in custody.

Speaking out for the first time in an exclusive interview with News Nation Sunday night, Alivea said she and her family felt ‘the weight of the world was lifted off our shoulders’ when they heard of Bryan Kohberger‘s arrest in Pennsylvania and read the damning evidence against him.

Kohberger, 28, is charged with the quadruple homicides of Kaylee Goncalves, 21, as well as her friends Xana Kernodle, 20, Ethan Chapin, 20, and Madison Mogen, 21, who were all found dead of stab wounds in their off-campus home.

An affidavit released on Thursday described how he allegedly stalked the victims for weeks before killing them, in a move that Alivea called ‘true evil.’

Kohberger now remains in the local jail after he was denied bail late last week. He faces the death penalty if he is found guilty of the brutal slayings.

Alivea Goncalves Stevnson, left, is the older sister of Kaylee Goncalves, center, one of the four University of Idaho students murdered in her off-campus housing on November 13. They are pictured with Madison Mogen, 21, Kaylee’s best friend who was also killed

Alivea said in the interview Sunday night how her and her family had ‘presumed innocence’ until they read a damning affidavit released late last week, which details how police in Moscow, Idaho were able to track down Kohberger.

She told Senior National Correspondent Brian Entin how she now thinks Moscow Police have developed a solid case against the suspected killer.

‘I was able to kind of read that and process that, and then you not only have a name and a face, but the beginnings of a case against him,’ Alivea said.

She added: ‘The relief that we all felt at having a suspect in custody, it was like, I can’t even describe, it was like the weight of the world’s been lifted off our shoulders.’

But when reading the affidavit describing the days and weeks leading up to her sister’s untimely death, Alivea said she could not help but remember the text conversations she had with her sister that day and how normal everything seemed.

Alivea didn’t know at the time, however, that ‘true evil was watching them’ as Kohberger allegedly returned to the house at least 12 times leading up to the slaying.

He would then return to the home just hours after the four University of Idaho students were killed, suggesting to Alivea that he wanted to return to the scene to see if a ‘circus’ had developed yet.

Based on that information, Alivea suggested Kohberger may have been contributing on online forums speculating about the quadruple homicide.

‘I don’t think that he would have been able to refrain from engaging with the online community,’ she said, as she asked Internet sleuths to continue sending her information connecting Kohberger, who was studying criminology at the University of Washington, to the four University of Idaho students.

But now, Alivea said, her family would like to set up a foundation in Kaylee and her best friend Maddie’s name. She seemed close with both of them, as they both appeared in her wedding.

Bryan Kohberger, 28, has been arrested in connection with the quadruple homicide

Alivea said she could remember what she and her sister were texting each other about when Bryan Kohberger allegedly stalked her. The sisters are pictured here in 2010

He goes onto describe how the Moscow Police tracked down Kohberger, who lived eight miles from the murder scene, and drove the white Hyundai Elantra cops were looking to trace.

With the help of genetic genealogy, cell phone data, CCTV footage, and evidence left at the crime scene, they were able to hunt down their suspect and charge him with the quadruple murder.

Kohberger was ultimately arrested by the Pennsylvania State Police at a home in Albrightsville, a small town in the heart of the Poconos Mountains on December 30 — more than 2,000 miles from where the gruesome killings took place.

Authorities say that following the November 13 murders, Kohberger and his father, Michael, drove 2,500 miles in a white Hyundai Elantra from Idaho to Pennsylvania.

On November 29, police obtained surveillance footage from the parking lot of Kohberger’s apartment building, some 10 miles from the murder scene, in Pullman, Washington State.

Moscow Police officers visited the parking lot to obtain a license plate for the vehicle – as it matched the description of the car they saw on footage the night the students were killed.

They ran a search, and found multiple incidents in which the car and its owner – Bryan Kohberger – had been pulled over multiple times in the past.

With Kohberger’s name, police honed in on him and reviewed historic surveillance camera footage, along with phone records, going back several months.

Then following their initial suspicions, Kohberger was pulled over over twice as he passed through Indiana on December 15 – once for speeding and the other for following a car ahead too closely.

Cellphone tower data also seemed to link him to the crime scene – as well as a single male DNA left on a knife sheath next to two of the dead victims at the home in Moscow, Idaho.

Former friends of Kohberger’s have since detailed how he was bullied and dropped 100 pounds in his senior year of high school before taking up hard drugs.

Casey Arntz, who was friends with Kohberger, has revealed what he was like at school

Kohberger lost 100 pounds in high school, and was previously bullied, according to his former friends

Two of his high school friends, Casey Arntz and Bree, who asked to have her last name kept private, said Kohberger shed nearly 100 pounds in his senior year after being the brunt of his classmates’ jokes – which was when people noticed a switch in him.

Arntz told CBS’ 48 Hours: ‘He was rail thin. It was after that weight loss that a lot of people noticed a huge switch.’

After losing the weight, it was Kohberger who started bullying Arntz’ brother – putting him in chokeholds and getting physically aggressive with him.

In the years after high school, the suspect seemed to be getting his life back on track, and would tell Bree that he was ‘going to be better.’

Kohberger is pictured smiling in court on January 5, 2022 after being denied bail

Both of the women last saw Kohberger at a friend’s wedding in 2017 – where they said he looked ‘good’ and seemed to have a new lease of life.

And Bree said that his new focus on his criminology studies: ‘His goal was just to change the world for the good around him. He wanted to do something that impacted people in a good way.

‘People were not his strong suit. she added, ‘And I think through his criminology studies, he was really trying to understand humans and trying and understand himself.’

Speaking about Kohberger allegedly being the Idaho killer, Arntz said: ‘I honestly think he did it because he wants to see if he can get away with it. Where did it go wrong? What happened…why didn’t I see it?’

Kohberger was picked up by a cellphone tower near the property at least 11 more times before the murders on November 13. Cops have yet to share further details of those subsequent visits.

4:00-4:20am: Maddie Mogen, Kaylee Goncalves, Xana Kernodle and Ethan Chapin were all knifed to death at 1122 King Road, Moscow.

4:50am-5:26am: Phone pings show it traveling south on ID95 to Genessee, Idaho, them west towards Uniontown, Idaho, and back north into Pullman, Washington.

November 13, 9:00am: Kohberger’s phone is on the move again, and travels back to the vicinity of the King Road murder house. It is picked up by a nearby cellphone tower between 9:12am and 9:21am.

9:32am: Kohberger’s phone indicates that he’s arrived back home in Pullman again.