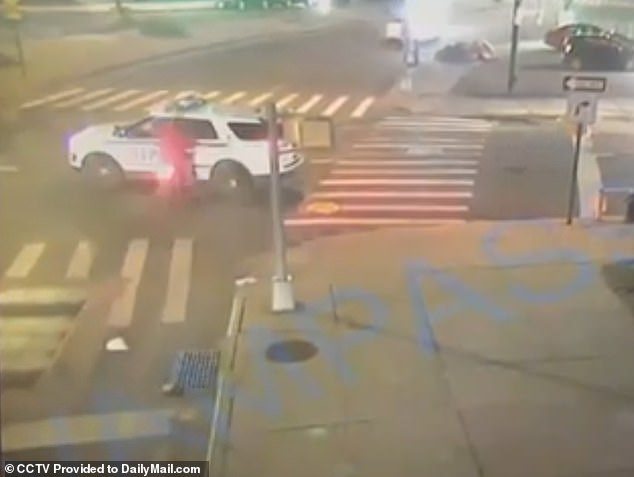 
Shocking moment moped driver, 34, on run from police smashes into NYPD squad car and is engulfed in fireball: Man is recovering in hospital

This is the shocking moment a speeding moped rider slammed into the side of an NYPD patrol vehicle and exploded in a massive fireball.

The crash happened in Queens during a police pursuit in the early hours of Friday morning.

The entire incident was captured on surveillance video as the NYPD vehicle moved to block an intersection in an attempt to bring the chase to a halt.

No sooner had the squad car moved into position, the moped rider came racing into the frame and straight into the side of the SUV which barely moved upon impact.

Public Safety officers spotted the moped in the area of a possible shooting on Jamaica Avenue just after 12:30am and began a pursuit.

Police then moved into position and attempted to shut down traffic in order to capture the biker.

But instead of slowing down, the driver plowed into the side of the NYPD vehicle that had positioned itself into the center of the intersection of Merrick Boulevard and Liberty Avenue.

The moped exploded on impact while the driver was flung over the top of the handlebars and into the side of the car.

The man could then be seen curling up on the ground in a fetal position as flames quickly took hold.

NYPD officers were not far behind with cops rushing to tackle the blaze, with several of them managing to drag the rider away from the blaze.

The 34-year-old driver was rushed to Jamaica Hospital where he was treated for cuts to his head. On Friday he was alert and talking after the incident and is expected to survive, reports the New York Post.

In regards to the shooting which sparked the chase, police are now combing through the area looking for a gun and questioning the moped driver about the incident.

The side of the NYPD patrol vehicle was left burned and blackened following the crash.