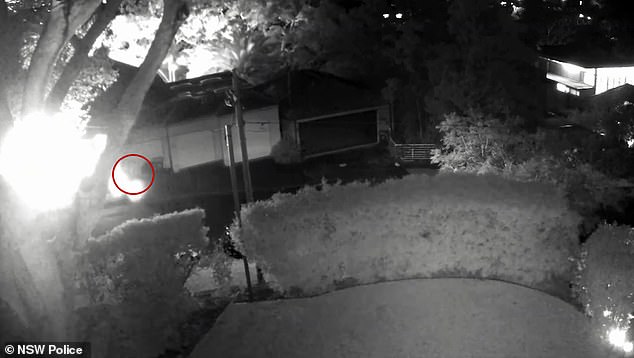 
CCTV footage has been released showing a man running from a blaze that destroyed a $24million mansion in Sydney.

The fire broke out at the luxury home at 62 Cliff Road in Northwood, on Sydney’s lower north shore, just after 11pm on September 3.

Detectives are treating the fire as suspicious and have released security footage from a neighbouring home in hopes of capturing the alleged arsonist.

A man, dressed in dark clothing, is seen entering the property moments before the fire started.

The fire broke out at the luxury home at 62 Cliff Road in Northwood, on Sydney’s lower north shore, just after 11pm on September 3

The blaze then breaks out before the man flees down the road.

Detectives believe the man captured in the security footage may be able to assist them with their inquiries and have asked any witnesses to come forward.

The home was built in 1915 and featured a tennis court, a boat house and its own cellar, and used to belong to travel industry pioneer Mary Rossi, her husband Theo and their ten children.

When Mrs Rossi died, her family were reluctant to sell it, but eventually it was sold to their next door neighbours – fund manager ‘Owen’ Ouyang Chen and his wife Xiao Hong Li.

Daily Mail Australia is not suggesting Mr Chen had anything to do with the blaze at his house.

In August, about three months before the home was sold, Mr Chen lodged a development application with Lane Cove Council requesting permission to demolish his house and rebuild with a $5million four-storey mansion with a swimming pool.

The proposal was rejected in October for a range of reasons to do with the immense size of the build, along with having ‘an unacceptable impact on the heritage’ house next door.

In the development application, Mr Chen said he wanted to build a bigger home for his children and other relatives.

Police scoured the area, speaking with neighbours and trying to get an idea of what happened

When that was rejected, he put in a modified proposal in July this year, which also drew objections from neighbours.

It is not suggested the development application had anything to do with the fire, simply that it is the recent history of the street.

Despite the best efforts of two trucks and 50 firefighters, the house was gutted by the huge fire.

Mrs Rossi, a TV pioneer and travel business owner, lived there until she passed away at the age of 95 in 2021 having raised her kids in the house with Theo, who died in 2010.

‘It’s funny seeing it written up in the media as a mansion,’ said Emma Rossi, 55, who was the ninth-born of the clan and works as a communications consultant.

The house (pictured, before the fire) was built in 1915 and sold last year for $24million

‘We never thought of it as a mansion, it was just a home.

Mary lived in the house until the end of her life and Emma said she was kept up with modern TV viewing to entertain her 40-odd grandchildren.

‘All the grandkids, including my own, used to love going up and spending the night with her and eating Maltesers and watching Game of Thrones,’ Emma told Daily Mail Australia.

Following the blaze, a property expert told Daily Mail Australia the value of the heritage house could have more than doubled.

‘Now the heritage house has gone up in smoke the property could be worth $60 million,’ said the expert, who declined to be named in order to speak candidly.

Emma Rossi, who is second from the right, with other members of her family at the home in Northwood, which has been destroyed by fire

Theo and Mary Rossi, the TV and travel pioneer, raised ten children in their family home at Northwood, bought in 1961 and lived in for 60 years

‘It is one of the largest properties with water frontage in Sydney and there was previously a development application to put two additional houses on the tennis court.

‘That DA was objected to by neighbours and didn’t go through. (But) there’s no heritage impediment any more.’

One of the largest pieces of privately-owned land in the city, 62 Cliff Road, Northwood, boasts a wide, 46m water frontage.

The almost 5000-square metre property juts down to the Lane Cove River and is bordered by federation-style properties.

It is an area that rarely sees hellish scenes and hears ‘bomb-like’ blasts such as those caused by the fire that engulfed the home about 11pm last Saturday.

TIMELINE OF A GRAND MANSION TURNED TO ASHES

1915: Mansion is built at 62 Cliff Road, Northwood in ‘plantation-style’ on a massive block of land almost an acre running down to a 46m wide frontage on the Lane Cove River

1961: Travel industry and tv pioneer Mary Rossi and her husband Theo buy the house and bring up their family of the children for over 50 years at the home

2010: Theo Rossi dies, but Mary aged in her mid-80s stays on, making sure she remains across modern TV trends with her grandchildren

2017: The Rossi family put in Development Application to Lane Cove council to subdivide the land into three, preserving the heritage-listed original home but having two new houses built on the tennis court

2018: After the council rejects the DA following objections from neighbours, the Rossis decide to retreat from their plans

August, 2021: Next door neighbour Owen Chen puts in a DA for his property at 60 Cliff Road to be demolished and a four storey house with pool constructed

October 2021: After neighbours’ objections, the DA is rejected and Mr Chen stars making plans for a revised DA

November-December 2021: In the wake of the death of Mary Rossi, her children finally decide to place the house on the market and Mr Chen makes a winning offer of $24m and the house is settled before Christmas

July 2022: Mr Chen puts in a modified proposal of his DA, which also draws objections from neighbours

September 3, 2022: A fire breaks out at around 11pm at 62 Cliff Road and a series of explosions shatter the neighbourhood, with the mansion engulfed by flames and destroyed in under an hour

September  5, 2022: After accelerant detector dogs were brought in to the gutted property, police reveal they are treating the fire as ‘suspicious’ and that CCTV from a nearby property has caught a person fleeing the house just before the fire took hold