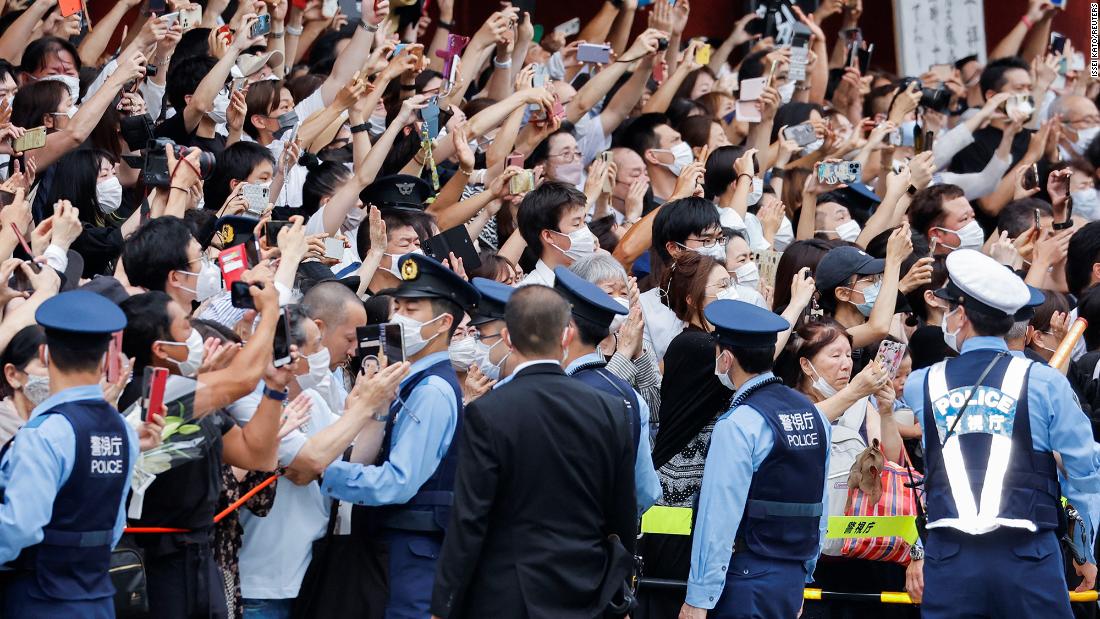 The private funeral was hosted at the centuries-old Zojoji Temple by Abe’s widow, Akie Abe. Well-wishers queued outside, bringing flowers, notes and green tea — symbols of help in the afterlife — to pay their respects to Abe, Japan’s longest-serving prime minister.

Following the service, a hearse carrying the former leader’s body traveled from the temple to the Kirigaya Funeral Hall for cremation, passing significant buildings including the Prime Minister’s office and the Parliament building.

Large crowds lined the streets to catch a glimpse of the hearse. Many waved and raised their arms in the air as the vehicle drove past, while others bowed their heads in respect.

Akie Abe traveled in the front seat of the hearse, bowing to the crowd as they paid their respects. She carried an ancestral tablet, a symbol of transition to the afterlife.

Millions around the world have reacted with shock and anguish at how Abe was gunned down in broad daylight during a campaign speech in the central city of Nara on Friday.
Police are investigating the shooting. The suspect, 41-year-old Tetsuya Yamagami, was arrested at the scene but has not been formally charged.

The brutal nature of Abe’s death has left millions reeling across Japan, a country with one of the lowest gun violence rates in the world.

“When I found out about his mortal injury and subsequent demise, my heart sank,” she said. “For someone in international relations, even though I can be critical of some of his policies, you have to appreciate so much of what he did to put Japan back up on the world stage.”

Naomi Aoki, a supporter of Abe’s Liberal Democratic Party, on Tuesday waited outside the Parliament building, hoping for a chance to say farewell.

“For me, he was the most respected politician in Japan. I want to say the last farewell and I was off work today. He has made a great impact on my life,” Aoki said.

“I don’t think his death will be for nothing. People all over the world will feel the impact of what he achieved in his life.”