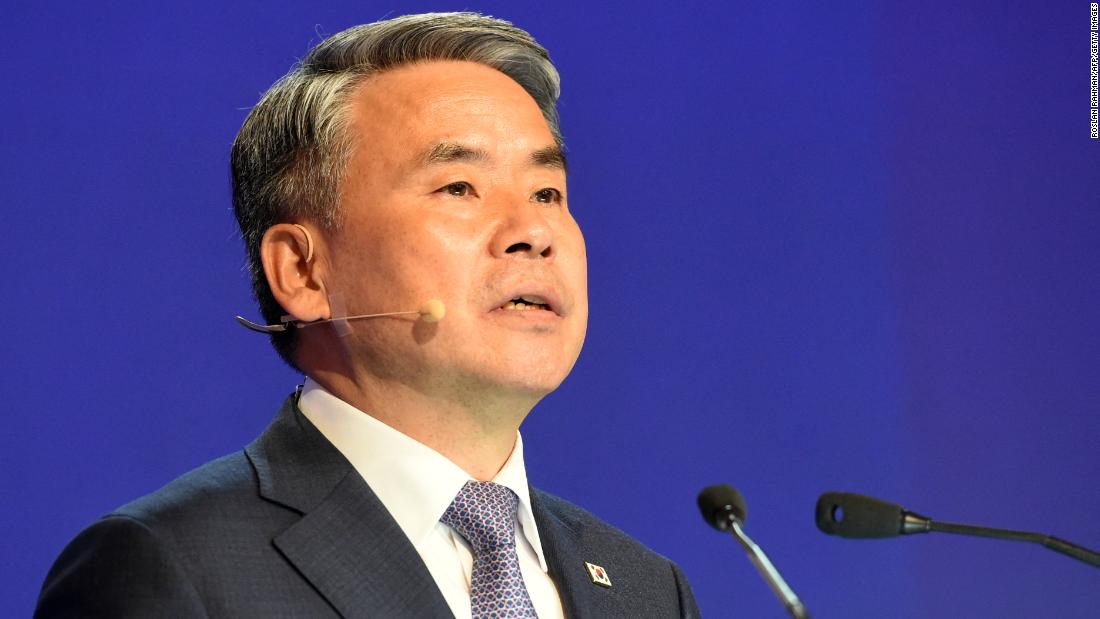 “Our government will strengthen capabilities to better implement the US extended deterrence and will dramatically enhance response capabilities of the Republic of Korea military to deter North Korea’s nuclear and missile threats,” Defense Minister Lee Jong-Sup said at the Shangri-La Dialogue security forum in Singapore.

Lee also said South Korea would work more closely with the United States and Japan as part of its response — echoing a pledge made by US Defense Secretary Lloyd Austin a day earlier.

North Korea’s “repeated missile provocations” were advancing in “quality and quantity,” Lee said, adding that this and preparations for a nuclear test were a “grave challenge threatening peace and stability.”

That threat has been a key topic of discussion at the three-day security forum, which draws defense officials from across the region and this year has been playing out under the shadow of the war in Ukraine and heightened concerns over Pyongyang’s weapons program.

North Korea has significantly ramped up its ballistic missile testing this year, launching 17 missiles to date, while both the United States and the International Atomic Energy Agency have warned of signs the country is preparing for an underground nuclear weapon test, in what would be its first since 2017.
Lee’s latest comments are another sign of Seoul’s shift to a harder line against the regime of North Korean leader Kim Jong-un, following North Korea’s flurry of missile testing and the election of new South Korean President Yoon Suk Yeol.

The dialogue has also been a forum for countries to bolster plans for cooperation to deter the North Korean threat.

In a meeting on the sidelines of the forum on Saturday, US Defense Secretary Lloyd Austin, Japanese Defense Minister Nobuo Kishi of Japan and South Korea’s Lee spoke of “solidarity” as a key element of deterrence against North Korea, according to a senior US defense official.

Austin pledged to deepen American security cooperation with Japan and South Korea in response to North Korean provocations in an address that same day.

“We remain open to future diplomacy — and fully prepared to deter and to defeat future aggression,” he said.

Earlier this month, the US and South Korea responded together to a North Korean ballistic missile test by firing their own missiles into waters off the east coast of the Korean peninsula, while US and Japanese forces held a joint drill.

Chinese Defense Minister Wei Fenghe also weighed in on North Korea’s recent missile launches in response to a question following his own address at the forum on Sunday.

Wei said China would continue to promote peace on the Korean peninsula, but stressed that the security concerns of all parties should be accommodated.

“The concerns of the DPRK [Democratic People’s Republic of Korea] are not addressed by the international community,” he said, adding that international sanctions had been detrimental to the quality of life in North Korea.

Late last month, China, together with Russia, blocked a US-led bid to strengthen sanctions against North Korea in response to recent ballistic missile tests in violation of UN resolutions.

In his address, South Korea’s Minister Lee said if North Korea made substantial progress in denuclearization, South Korea would pursue a “bold plan” to help improve the country’s economy and the lives of its citizens, but this plan needs to come “from a position of strength.”

CNN’s Ally Barnard and Teele Rebane contributed to this report.

Benito, the son of popular Nigerian rapper, JJC Skillz, has reacted after his father announced…