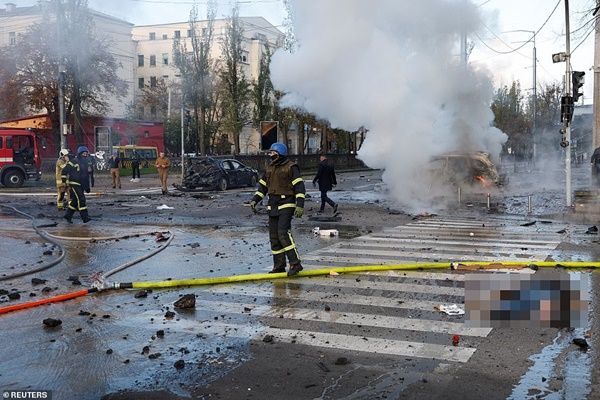 On 11th November 2022, Russia announced that it was withdrawing from the Ukrainian city of Kherson. Interestingly, the Kremlin dissociated itself from the announcement, attributing it to the military. Kherson had been the most prized trophy Russia had won since it attacked Ukraine on 24th February 2022 in what it called a “Special military operation.”

On Monday 14th November 2022, President Volodymyr Zelensky made an unannounced trip to Kherson to visit his troops.

According to a top Ukrainian official on BBC, conditions in Kherson were dire as there was no water or electricity. The reason was that, the retreating Russians had in addition to laying mines, destroyed all water and electricity/energy installations as well as any infrastructure of importance which could help Ukraine rebuild.

This reminded me of the concept of “scorched-earth” policy I was taught in the early 1970s as an officercadet.

Scorched-earth policy is a military strategy where a withdrawing/retreating army destroys anything that might be useful to an advancing enemy. While it is generally carried out in enemy territory, it could in some cases be carried out in own friendly territory.

Like a losing boxer retreating when under pressure from his opponent, “Withdrawal” as a phase of war, is generally undertaken when an army is under pressure from an advancing enemy. Morale among troops is low, as a withdrawal is often resorted to in the face of a tactical defeat.

In order not to leave anything advantageous to the advancing enemy, a withdrawing army destroys anything in sight. The aim is to prevent any valuable asset from falling into hands, which could be used against the withdrawing/retreating army.

In addition to the destruction of communication equipment, electricity/water installations and general infrastructure, oil wells as happened to the Kuwaitis in their war with Iraq in 1991 could also be destroyed. Indeed, in January 1991, while retreating under pressure from the American-led coalition in the Iraq-Kuwait War, the Iraqis set fire to over 600 Kuwaiti oil wells in a scorched-earth action.

Paradoxically, a scorched-earth policy failure by a retreating army could prove disastrous, if not properly done as happened to the Germans in WW2. The capture of the Remagen or Luddendorf Bridge over the River Rhine in Germany by the Allies in 1945 was to prove decisive in the outcome of WW2.

Following a botched attempt by the Germans to blow the bridge at Remagen in April 1945 to prevent it from falling into Allied hands, the Allies captured the important bridge intact. This allowed them to ferry thousands of troops and logistics across despite a desperate last-minute German spirited effort to blow the bridge. This eventually led to the German surrender.

While “scorch-earth” may generally be a military action originated at the strategic level as in the Iraqi case, it could also happen in non-war situations as happened in Burkina Faso recently.

In mid-November 2022, in a reaction to the nationalization of mines by the government of Burkina Faso, Canadian mining firm Trevali at Perkoa, Burkina Faso destroyed vehicles and any equipment they could,in what could pass for a scorched-earth action, albeit in a non-military situation.

Rather than leave intact any mine equipment which the Burkinabes could utilize, they destroyed anything/everything in sight.

Incidentally, this was the zinc mining company whichin September 2022 was found guilty of manslaughter following a flooding disaster in April 2022 that killed eight miners.

In recent times, the unbelievable impunity ofdestruction of lands, the pollution of our surface water bodies, the denuding of our forest vegetation, the cutting and export of millions of rosewood trees in Ghana makes me wonder if we have not embarked on adeliberate domestic scorched-earth policy against ourselves in support of foreigners! It is unconscionablethe massive destruction Ghanaians are inflicting on Ghana.

Unfortunately, the question I am often asked during such conversations is, “do they have any conscience?”

In scorched-earth policy, the target is the enemy as in the Iraq-Kuwait scenario where the retreating Iraqis destroyed Kuwaiti oil wells. To a lesser extent, the foreign mine owners, out of frustration may see the government of Burkina Faso as the “enemy” for wising up to exploit their minerals themselves.

However, in the case of the destruction going on in Ghana where Forest Reserves are busily being converted into deserts, and rivers into sewage sludgeheavily polluted with mercury and cyanide, I have difficulty understanding what Ghanaians are doing to Ghana, aiding foreigners to destroy Ghana. Ghana Water Company spends heavily treating our almost untreatable water.

A popular radio analyst recently in frustration, “what kind of people are we?” Where is the patriotism Osagyefo taught us, as Ephraim Amu composed in our patriotic song “Y3n ara y’asaase ni?”

In all this, where are the people Ghanaians supposed to manage us the way the C17th political philosopher Thomas Hobbes proposed in his book The Leviathan?He said, if every individual had to fend for himself providing all his needs including security, humanity would be reduced to the jungle law of survival-of-the-fittest. Life would become “solitary, poor, nasty,brutish and short!” Hobbes’ idea was later improved upon by John Locke, JJ Rousseau and other C18thpolitical philosophers.

It is on account of this that, in a civilized society, the majority cedes part of their rights and privileges in a social contract, to a government which must provide them with security, infrastructure, good-governance/leadership, in what a democracy is supposed to be.

In her message to the graduating class of Summer 1965 cadets of the Royal Military Academy Sandhurst, UK,Queen Elizabeth 2 advised “remember always that, the best and purest form of leadership is EXAMPLE!” Are our leaders leading by example?

The scorched-earth direction of corruption, arrogance, destruction, impunity and disrespect must stop if we are to survive as a nation. Reports this week say Ivory Coast has built a $100 million factory to process all her cocoa. What lessons can we learn from Ivory Coast which is still recovering from the effects of a civil war?

A lesson I learnt on my most recent visit there was that, Ivory Coast does not import tilapia. Indeed, internally, every district/region grows its own tilapia from their water bodies. So, tilapia does not cross regional boundaries!

Let us remind ourselves of the “Pardoner’s Tale” in Geoffrey Chaucer’s Canterbury Tales that, “radix malorum est cupiditas,” to wit, “greed, or the love of money is the root of all evil!” Our internally-generated “scorched-earth” policy must stop before we wipe ourselves off the globe!