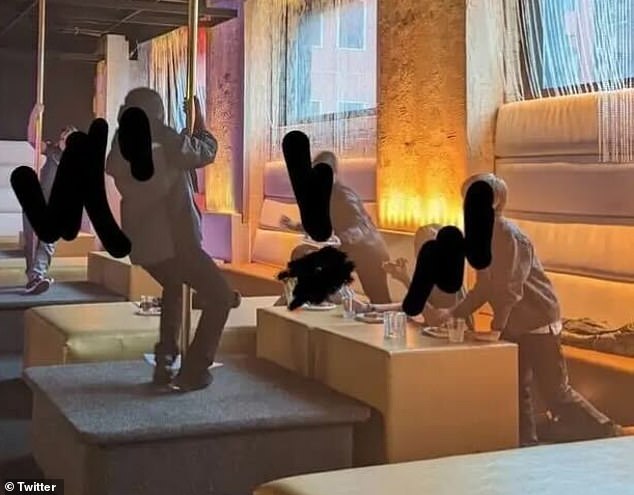 
A Michigan school district has come under fire after sixth-graders were pictured practicing pole dancing while on a class field trip.

The band teacher at Hart Middle School took sixth-graders to see the Detroit Symphony Orchestra back in November.

But a school board member revealed that during the course of the field trip, the students were taken to lunch at Niki’s Pizza — which is connected to Niki’s Lounge, a strip club in the Motor City.

The pizzeria was said to be too overcrowded so the students were moved to Niki’s Lounge, where some students were pictured swinging on stripper poles.

In a statement to FOX News, a spokesperson with the Rochester Communities Schools confirmed that the students did, indeed get lunch at Niki’s, but would not comment on the incident further.

It advertises itself as the premiere nightclub in the Motor City, but a flyer on its Instagram shows that it has at least hosted strippers with ‘sexy ladies’ in bikinis.

But the spokesperson for the school district just said that parents with concerns should reach out directly to their school administrators.

‘Rochester Community Schools appreciates the  strong teacher and caregiver partnerships as we work together to enhance classroom learning opportunities.

‘Parents and caregivers are always encouraged throughout the school year to contact their school administrator with questions or concerns.’

The spokesperson added: ‘Proposed field trips are evaluated by a curriculum team and require a parental/guardian permission slip.

‘RCS may ask parents, caregivers or other responsible adults to serve as field trip chaperones when appropriate.

‘Adult chaperones are required to complete background checks,’ the spokesperson continued, noting, ‘The safety and security of our students, staff and school community is always our top priority.’

A flyer posted to Instagram shows it has at least hosted strippers, advertising: ‘Guys bring your singles’

Now, a school board trustee is publicly questioning why the district won’t be transparent about what happened.

Andrew Weaver posted about the incident on his blog last Friday, noting that Niki’s is located in an area that the Detroit Police Department monitors as part of its Project Green Light Detroit, where local businesses work with the police department to install real-time cameras that connect directly to the police headquarters.

Weaver has since taken down the post, but wrote on Sunday: ‘The post was factual and offered no judgment or opinion. The information that was shared came from community members sharing it via social media. The information was not gained through my role as a Trustee.

‘As I have stated previously and a key foundation of my promise to the public, there needs to be more focus on the actions that reflect poorly on our District.

‘Many community members feel that there is too much time and energy spent trying to stop people from knowing about the actions that reflect poorly on the District while not enough time or energy is spent on actually doing anything about the issue(s) at hand.

‘As board members, it is critical that we remain objective and not allow personal biases to influence what concerns we take seriously and which ones we minimize,’ he continued.

‘While we may all want to believe no one would act intentionally to put students in harm’s way, it would be irresponsible to make a case-specific statement without having considered the details unique to this particular situation.

‘Whether harm was done intentionally or otherwise, it is equally essential that our staff members are trained and empowered to make difficult and responsive decisions that respect the best interest of our learners and communicate their decisions with needed stakeholders when appropriate or required.’

Weaver continued to say he would bring up the issue at a future board meeting, noting, ‘As a board, we need to understand what happened on the field trip was a symptom and not the root cause of the problem.

‘Our responsibility is to ensure the root cause is addressed and that what happened this past November does not happen again.’

He also told FOX News the bigger issue to him was that the district was not transparent when the incident happened.

‘How did get here? How do we not just communicate clearly to parents what happened?’ he asked. ‘A mistake was made, and address it and make sure that we have the policies in place to prevent it from happening again in the future.

‘It’s not a witch hunt, no one’s going after anyone,’ he continued. ‘It’s really just about how do we make sure that we communicate properly.’

But some on social media are now accusing Weaver of trying to ‘stir the community pot.

‘Weaver knew what he was doing when he posted on January 6. He knew he’d stir up controversy. He knew this would gain him the limelight he so needs. And he knew this would hurt a wonderful educator in our district,’ Molly Corombos wrote.

‘If he’d wanted to act professionally he would’ve taken the pictures — pictures I am certain he received from a parent on the trip who took them while laughing at the entire circumstance before he posted them on social media and spread them around again laughing — and saved them for a private discussion with other board members.

‘I agree that this is a situation that might require clarification, a question about what happened and a discussion of how this won’t happen again,’ she noted.

‘What it doesn’t call for is a public flogging of our educators and the lack of gravitas that Weaver displayed while making his post and then summarily insulting constituents who called out his actions,’ she said.

Jennifer Tukasi added that Weaver knew the post ‘would be highly inflammatory leading to attacks on a teacher whether OR not you yourself “say anything” you knew what the effect would end up being.’

She also said he should have brought his concerns to district officials, saying: ‘If I were a parent of one of these kids and we all knew they pretty much were already aware of it all — regardless of how I felt about the situation, I would be absolutely disgusted by how you, a Trustee, have chosen to handle this situation.’

Tukasi concluded: ‘You were, in my opinion, egregiously neglectful in your duty as a trustee in handling this in this manner.’

Weaver won a position on the school board in November campaigning on a policy of transparency amid growing frustrations about what he deemed were anti-parent actions taken by the school board.

The district was recently forced to settle a lawsuit for tens of thousands of dollars after parents accused school officials of spying on parents’ Facebook posts and retaliating against those who spoke out against it.

The federal suit alleged that district officials were ‘assigned to regularly capture screenshots of district parents’ social media posts and comments which criticized the school district and to compile dossiers of the screenshots, which were circulated to members’ of the administration and board.

Some of the information they would collect, the lawsuit said, included information about the employment of parents who protested the district’s policies, the names of their children and the schools they attended.’

The scandal led to calls for Superintendent Robert Shaner’s resignation and Weaver’s ultimate appointment to the school board.

But almost immediately after he was sworn in, the Detroit News reports, Weaver was notified in a letter that he is expected to speak ‘with one voice through the Board president.

‘It is imperative that the Board take immediate action to ensure Mr. Weaver’s compliance with protocol,’ Shaner wrote in a letter to the board president and vice president on December 21.

‘Otherwise I will be compelled to seek legal redress in another venue.’

He did not specify what other legal actions he may take.