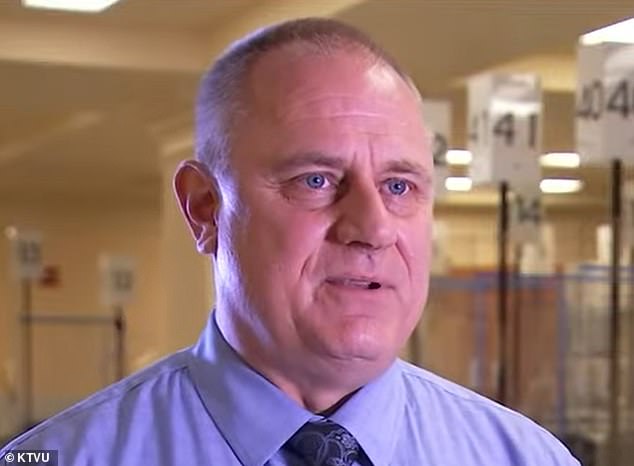 
San Francisco’s election director, who has been in the position since 2002, will have his contract terminated in a move that ‘wasn’t about performance’ but about ‘racial equity’.

John Arntz, who is white, will be fired from his position and won’t receive a renewed five-year contract, San Francisco’s Elections Commission decided in a 4 to 2 decision last week.

The decision to get rid of Arntz was driven ‘in large part by the city’s plan for racial equity’ – as Dem-led San Francisco strives towards making workplaces more diverse.

However, it was Arntz himself, as Department Director, who helped to establish plans such as the Racial Equity Action which have now ultimately cost him his job.

Cynthia Dai, a member of the commission who voted to oust Arntz, told the Washington Free Beacon: ‘It’s hard to achieve diversity targets if senior roles never open up. This has nothing to do with his performance.

‘It was time to open up this position to a more diverse field,’ reports Mission Local.

Dai, alongside Elections Commission staff Chris Jerdonek, Robin Stone, and Renita LiVolsi all voted to remove the beloved director after he served the city as a trusted employee for two decades.

The removal of the director from his job was sanctioned – despite widespread praise from colleagues regarding his tenure in the position.

‘He’s remained impartial and has avoided getting caught up in the web of City politics, which is what we are seeing now as a result of this unnecessary vote.

‘Rather than working on key issues to recover and rebuild our City, this is a good example of unfair politicization of a key part of our government that is working well for the voters of this city.’

California Senator Scott Wiener also revealed his fury at the decision to sack the director – saying that he created and sustained ‘one of our best run departments.’

The senator added: ‘When John Arntz took over as Director of Elections, the Department was a mess — remember ballot box tops floating in the bay?

‘Arntz turned it around. It’s now one of our best run departments. Why on earth is the Elections Commission moving to dump this strong elections leader?’

Arntz’s contract will expire in May next year but he could still choose to reapply for the job.

This will be the first time since 2002 that the Elections Commission chose not to renew the position in favor of conducting a search for new candidates.

Chris Jerdonek (pictured), the commission’s president, told Arntz in an email that the decision was unrelated to his performance over the past 20 years

As director, Arntz has been in charge of running the elections for the county and the city for 20 years. This move came just eight days after the November 8 midterm election.

City Attorney David Chiu said he was ‘mystified’ by the commission’s decision, saying ‘some folks have forgotten the history of this department.’

‘Before Director Arntz, we had five directors in as many years, ballot boxes floating in the bay and an intense lack of confidence in city elections,’ he told Mission Local.

Arntz was told in an email from the Commission’s president Chris Jerdonek: ‘Our decision wasn’t about your performance, but after twenty years we wanted to take action on the City’s racial equity plan and give people an opportunity to compete for a leadership position.’

Cynthia Dai, a member of the commission who voted against Arntz’s renewal, said that ‘it’s hard to achieve diversity targets if senior roles never open up’

A man is seen at Department of Elections to cast his vote in City Hall of San Francisco. The move from the commission came around eight days after November 8 midterm elections

In 2021, the Elections Commission wrote to the mayor that its elections were well run, saying: ‘San Francisco runs one of the best elections in the country and we believe this transparent process has allowed us to continue to improve our elections.’

A year prior in 2020 it wrote Arntz a commendation for his ‘incredible leadership’.

Division Manager Mayank Patel wrote an email to the department without Arntz’s knowledge, Mission Local reported. It included a letter signed by 11 other division managers detailing why they supported his renewal.

‘Under the leadership of Director Arntz, our Department successfully conducted over thirty public elections and rebuilt the public’s confidence in the city’s elections processes from the ground up,’ wrote Patel.

Another official, District 2 supervisor Catherine Stefani, said on Twitter that the decision was ‘a dereliction of the Commission’s duty.’

Others who said they had the ‘pleasure’ of working under Arntz said that they were furious with the commission’s decision.

One former staff member said: ‘I’ve had the pleasure of serving under John Arntz at San Francisco Elections for the past 4 elections, and have been impressed how smoothly everything was run.

‘If the decision to dismiss John is based solely on race and not performance, I cannot agree with the Commission.’

If Arntz is still the most qualified candidate after a competitive search, Dai said he will have his contract renewed.

This comes as a rift emerged in San Francisco between elected officials and unelected bureaucracies where progressive identity politics have advanced faster, according the Free Beacon.

It suggests that the city’s ‘racial equity plan’ – which the Elections Commission cited to support their decision regarding Arntz – was created by the same elected officials that are now criticizing the decision not to renew him.

City attorney David Chiu said he was ‘mystified’ by the decision

A voting sign outside of San Francisco City Hall

District 2 supervisor Catherine Stefani, said on Twitter that the decision was ‘a dereliction of the Commission’s duty’

Share. Facebook Twitter Pinterest LinkedIn Tumblr Email
Previous ArticleUS Iran envoy highlights CNN’s report on rapes of activists in detention
Next Article Who Doesn’t Like Good Things? – Wendy Shay Questions As She Reveals Those Who Gave Her The Queen Of Ghana Music Title