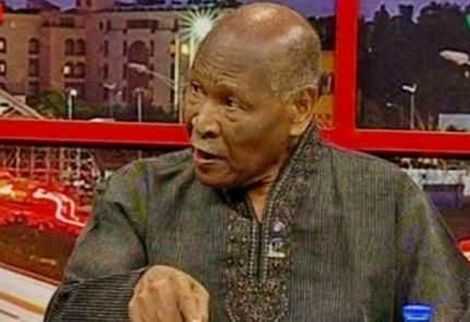 
Member of the Council of State, Sam Okudzeto, has reprimanded former President John Dramani Mahama over his recent comment about the judiciary and what he says is the ‘Unanimous FC’ tag ascribed to it.

In an interview granted to Accra-based Joy News, Sam Okudzeto opined that the former president should not be heard describing the Supreme Court as ‘unanimous FC’ even if it was the general expression of the masses.

He stated that it was shameful on the part of the former president to echo the ‘unanimous FC’ tag because he has once occupied the highest office of the land.

Citing the 2012 election petition, the former president of the Ghana Bar Association said Mahama did not complain when judgment went in his favor, however, he is now crying foul when the tables turned in the 2020 election petition.

Sam Okudzeto stressed that it was not in the interest of the former president to be making pronouncements such as ‘Unanimous FC’ – a term referring to the dismissal of cases by all members of the bench.

“When the election petition was given in his favor, he didn’t say anything against it. Why is it that this one is against him and he is now using this statement like that? He should never repeat it at all.

“You did not say anything was wrong with it then another election is held and judgment is given against you. This time you’re making reference and saying people are saying….if they are saying you shouldn’t repeat it.

“It is not in his interest to do that because we have learnt to revere our office holders. Even when they leave office, that reference is still there,” he said.

Speaking on the Afrobarometer report which said public confidence in the judiciary has waned, Sam Okudzeto suggested that it may have stemmed from ‘ignorant’ positions on matters about the court.

He said the report was not a litmus test adding that general opinions about the court have been formulated as a result of the continuous preaching of such message to them.

“Sometimes, we should be careful because they quote this Afrobarometer report as if it is a litmus test in the whole issue. As if they have the way to decide whether there’s or not.

“Public opinion I can tell you that when you go asking people who are ignorant of a system and it is being trumpeted to them, I think that is the more reason why the judge is giving a caution. When it is being trumpeted to people and I say “as for these judges you can’t trust them. They were all appointed by the NPP and therefore this is the reason why they do that,” that becomes the general opinion.

He said people mocked the phrase ‘go to court’ as a result of the gradual bias ascribed to the bench.

Mahama said it will only take a new Chief Justice to chart a path of restoring public confidence in the third arm of government as it attempts to repair it ‘broken image’.

“There is therefore the urgent need for the Ghanaian Judiciary to work to win the trust and confidence of the citizenry, and erase the widely held perception of hostility and political bias in legal proceedings at the highest courts of the land.

“Unfortunately, we have no hope that the current leadership of our Judiciary can lead such a process of change. We can only hope, that a new Chief Justice will lead the process to repair the broken image that our Judiciary has acquired over the last few years”, Mahama said.

The 2020 flagbearer of the NDC said the judiciary has now become subject to public ridicule.

“So badly has the image of our Judiciary deteriorated. That many of our citizenry openly make mockery of our justice system and of our justices. The phrase ‘Go to Court’ is these days met with derisive laughter, instead of hope that one will truly get justice.

“If people are not poking fun about politics and inducements being used to sway the hand of justice in the lower courts, then it is poking fun and making statements about the 7-0 of the ‘Unanimous FC’,” he lamented.