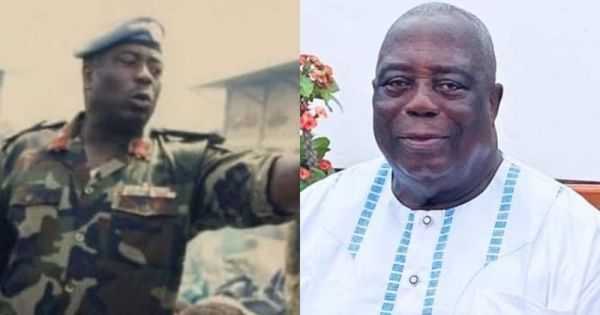 
On Thursday, 30th June 2022, my book West to East: My East African Sojourns, was launched at Burma Camp. Until a day before the launch, Maj Gen Henry Kwami Anyidoho (Rtd) was the Guest-of-Honour for the function.

As events turned out, both of them had to leave on the morning of 30th June 2022 for Kigali at the invitation of the Rwandan government.

Fortuitously, the Chairman for the launch the CDS Vice-Admiral Seth Amoama was to join them in Rwanda two days later on Saturday, 2 July 2022. He was therefore immediately “double-hatted” to add Gen Anyidoho’s role as Guest-of-Honour to his as the Chairman, a job he did seamlessly with aplomb to the admiration of all.

Why the sudden departure for Rwanda?

On Monday, 4th July 2022, at a simple, colourful and impressive ceremony in Kigali, President Kagame honoured retired Generals Anyidoho and Adinkrah for their outstanding bravery in saving thousands of lives at a time when the United Nations had abandoned Rwanda in the Genocide of 1994.

President Kagame, “on behalf of a grateful nation” decorated the Generals with Rwanda’s highest award the “National Order of Bravery.”

In his speech, President Kagame stated that, in 1994 in their greatest time of need when the world abandoned Rwanda with the withdrawal of the United Nations Assistance Mission in Rwanda (UNAMIR) at the instigation of Belgium which had ten soldiers killed, Ghana was the only country that stayed. Thousands of lives were saved by the bravery of Ghanaian peacekeepers under the command of then Lt Col Adinkrah the Battalion Commander, and the Deputy Force Commander, then Brig Gen Anyidoho.

Unfortunately, this fact is often not acknowledged in international Peacekeeping literature.

At the end of his address, President Kagame apologized for the awards coming 28-years after the event. He added the saying, “better late than never!”

Born in 1940, General Anyidoho was commissioned into the Ghana Army Signals Corps in 1965.

For twelve years, he was the Chairman of the Ghana Telecom Board.

In 2005 from retirement, he became a Joint Deputy Chairman AU-Un Special Representative in Dafur.

Gen Anyidoho has written two books, Guns over Kigali and his autobiography My Journey . . . Every Step.

Born in 1950, General Adinkrah joined the Army in 1970 as a member of the Regular Officers Training Scheme (ROTS) which did its Sixth Form (Advance Level) sponsored by the Ghana Armed Forces, at the Ghana Secondary Technical School (GSTS), Takoradi. On entry into the Ghana Military Academy in 1972, ROTS became Regular Career Course (RCC) Intake 15.

As a Brigadier-General, he commanded the then Northern Command of the Ghana Army with Headquarters in Kumasi. Finally, in 2009 he was appointed the Army Commander (Chief of Army Staff) as a Major-General.

As Abraham Lincoln said “a nation that does not honour its heroes will not long endure!”

In Kampala, Uganda, there is the UNDP “Mary Chinnery-Hesse Hall.” In Harare, Zimbabwe, there is the “Gen Emmanuel Erskine Research and Documentation Centre (GERDC).” In Fort Leavenworth, Kansas, USA, Lt Gen Seth Obeng’s name in engraved in the International Hall of Fame.

What do we do to/for our Ghanaian heroes in Ghana? What are Ghanaian youth learning from us?

In our country which is economical with praising merit and integrity, perhaps Rwanda’s example in honouring our Generals must show us the way!

Are our youth seeing Kennedy’s words in practice in leadership?

The 30th US President Calvin Coolidge said “the nation which forgets its defenders will itself be forgotten.”

With Rwanda honouring Ghanaian Generals twenty-eight years after the event, the younger generation will, hopefully learn that there are genuine ways of working and living honestly with integrity to bring honour and glory internationally to Ghana and family. Money is not everything as the focus appears to be!

Again, no matter how long it takes, the truth will always prevail.

It is not for nothing that the code “For God and Country” is emphasized in most Military Academies!

For the honour done Ghana by Rwanda 28-years after the 1994 Genocide, Ghana and the Ghana Armed Forces say to Generals Anyidoho and Adinkrah “AYEKOO!”

Your legacy is forever etched in stone!

Shakespeare’s Mark Anthony in eulogizing Julius Caesar said, “the evil that men do lives after them. The good is oft interred with their bones!” Like Caesar, so let it be with our gallant Generals!!