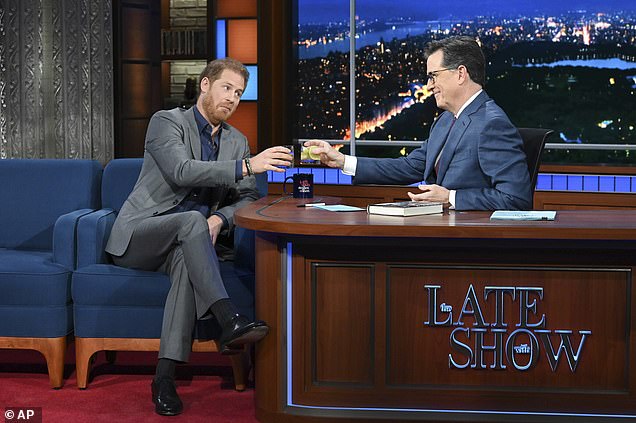 
Fresh questions have been raised over the accuracy of Prince Harry‘s explosive memoir after his bold claims on royal ancestry were debunked by historians.

Recalling his time at the prestigious boarding school, Harry bemoans the ‘perpetual mourning’ of his alleged ancestor, whose direct lineage ended after his sole heir, Edward of Westminster, died as a teenager at the Battle of Tewkesbury.

But his link to Henry VI was debunked by experts who took to social media to slam the inaccuracy and lack of fact-checking for a non-fiction project that cost a reported £16million ($20million).

Fresh questions have been asked over the accuracy of Prince Harry’s memoir after his claims on royal ancestry were debunked by historians. Pictured: Prince Harry sips tequila with The Late Show host Stephen Colbert

Royal correspondent Patricia Treble took to Twitter to point out the genealogical error in Spare and the fact Henry VI had no descendants after his son’s death in 1471.

She was joined by dozens more historians, who also criticised the ‘bad history’ being trumpeted within Harry’s best-selling book.

Publishers yesterday said that the prince’s tell-all memoir has become the fastest selling non-fiction book ever.

Others pointed the blame for the Henry VI error at the memoir’s ghostwriter, award-winning American journalist and author J.R. Moehringer.

Born at Windsor Castle in 1421, Henry VI succeeded to the thrones of England and France as a child after his father Henry V and grandfather Charles VI of France died within months of one another.

The boy king who would rule over dual monarchies was crowned at the age of eight in England in 1429 and, in 1431, was also made King of France.

He later married Margaret of Anjou, the daughter of René, King of Naples, in 1445 as part of a peace agreement with France. But the king’s health took a turn for the worst in 1453 when he began to exhibit symptoms of mental illness.

The monarch, by means of a ‘sudden fright’, entered into catatonia – a state of  psycho-motor immobility and behavioral abnormality.

Margaret gave birth to the couple’s only child, Edward of Lancaster, as the king remained in his catatonic state in October 1453.

The French queen emerged as a key player in the lengthy civil war as her husband remained in ill health.

After various battles led by Queen Margaret throughout the 1450s, Henry was eventually deposed by the Edward IV, the first Yorkist King of England, and imprisoned in the Tower of London.

His reign was briefly restored after Edward IV was forced to flee in 1470.

Henry’s second rule did not last long, however, and he was deposed again following the Battle of Tewkesbury in 1471.

His only son, Edward, is believed to have been killed on the battlefield – thus ending the Lancastrian dynasty.

Henry was said to have died of melancholy shortly after, though some evidence suggests that the newly re-crowned Edward IV ordered his murder.

Henry VI’s bloodline did continue through later generations when the son of his half-brother, Henry VII, ruled as King of England between 1485 to 1509.

Spare is being sold for £14, not the recommended retail price of £28, in places such as Waterstones and WH Smith as well as online at Amazon – where it has hit the coveted number one spot on their bestselling book list.

It comes as the reliability of Prince Harry’s memoir was also called into question over the issue of how he learned about the death of the Queen Mother.

In his book the Duke of Sussex wrote in painstaking detail of a call he received while studying at Eton College telling him his great grandmother had died on March 30, 2002.

He writes: ‘At Eton, while studying, I took the call. I wish I could remember whose voice was at the other end; a courtier’s I believe. I recall that it was just before Easter, the weather bright and warm, light slanting through my window, filled with vivid colours.’

But resurfaced photographs appear to place the prince in Klosters, Switzerland, on the weekend the Queen Mother died.

Harry posed alongside his brother William and father Charles in a media call on March 29, having recently shrugged off a bout of glandular fever in time to hit the slopes.

Resurfaced photographs appear to place the prince in Klosters, Switzerland, the weekend the Queen Mother died

Harry posed alongside his brother William and father Charles in a media call on March 29, having recently shrugged off a bout of glandular fever in time to hit the slopes

The trio leaned against a rock, laughed with one another and put their arms around each other in the pictures

It was his first public appearance after admitting to smoking cannabis and drinking underage, BBC reported at the time.

Prince Harry reportedly told the gathered crowd he was on doctors orders to ‘take it easy’ on the slopes, and appeared jovial by all accounts.

The trio leaned against a rock, laughed with one another and put their arms around each other in the pictures.

Three friends from Eton were said to have accompanied the boys on the trip.

Royal commentator Richard Fitzwilliams told MailOnline: ‘It seems from the evidence, that he was undoubtedly in Klosters at when the Queen Mother died.

‘This portrait of being at Eton, ”the weather bright and warm, light slanting… vivid colours” is therefore inaccurate.’

Princes William and Harry and their father Prince Charles with The Queen Mother during celebrations to mark her 101st birthday August 4, 2001

Prince Harry sits in a car as he and his brother, Prince William and his father, Prince Charles head for home from a skiing trip in Klosters

Mr Fitzwilliams, quoting the Queen herself, noted it is possible that ‘some recollections may vary‘, but described this as ‘a serious mistake’.

‘Errors such as this cast doubt on the veracity of other details. If you hire a ghost writer and don’t fact-check properly, this is what can happen.

‘The book is so hugely controversial that he cannot afford mistakes such as this. Much of the appeal of the prose is in the descriptive passages. However, are there other inaccuracies? A mistake like this poses this question.’

Buckingham Palace issued a statement on March 30, 2002 which read: ‘The Queen, with the greatest sadness, has asked for the following announcement to be made immediately: Her beloved mother, Queen Elizabeth, died peacefully in her sleep this afternoon.

King Charles, the then Prince of Wales, issued a statement through his own spokesman later that day which revealed he was still in Klosters.

It read: ‘He [Charles] is devastated. His only wish is to get home as soon as he can.’

A jet carrying Charles and his sons reportedly arrived back in the UK the next day, having received special permission from the Queen for the trio to travel together.

The apparent inconsistency has raised concerns among fans and critics alike, who have asked whether his recollection for the remainder of the memoir are to be trusted.

In Spare, Harry himself acknowledged his memory suffered after the death of his mother.

Similarly, Harry wrote in the memoir he received an Xbox from his mother, Diana, in 1997 as a gift for his 13th birthday.

The first Xbox console was not available for purchase until late 2001, sparking further questions as to whether Harry could have possibly received one several years earlier.

But others have given him the benefit of the doubt, noting it is likely he was simply referring to a different type of gaming device, like a PlayStation, which was first released in 1994.

The late Queen Elizabeth famously issued a withering assessment of the Sussexes’ bombshell interview with Oprah Winfrey in which they alleged someone in the fold asked what colour Archie’s skin might be.

Some 36 hours after the extraordinary interview, the Queen said she was ‘saddened by the claims’ but that ‘some recollections may vary’.

The phrase is now somewhat synonymous with the couple, and much of the criticism surrounding Harry’s latest media blitz – and the memoir itself – surrounds whether the Duke of Sussex has accurately recalled incidents.

Prince William is reportedly devastated by the allegations levelled against his family. Pictured together at the unveiling of a statue of their mother, Princess Diana in 2021

It is unclear where Harry’s relationship with his father stands following the onslaught of bombshells he has revealed this week.

Sources say King Charles is saddened by the saga but unlikely to publicly comment on any of the points that Harry has raised.

Harry, meanwhile, has said on multiple occasions he is open to reconciliation with his family, but there are conditions.

Speaking to ITV‘s News at Ten anchor Tom Bradby, Harry said he’d be open to reconciliation and even returning to a partial royal role, on the condition he could have ‘frank’ conversations with his family which would stay private.

‘I don’t know whether they’ll be watching this [interview] or not, but, what they have to say to me and what I have to say to them will be in private, and I hope it can stay that way,’ he said, noting he doesn’t want ‘frank discussions [to] leak out’.

The comments have been labelled ironic given all the private moments Harry has shared in his memoir.