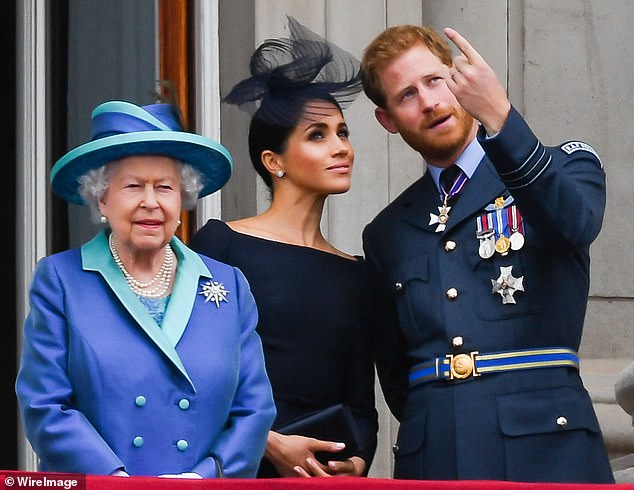 
A royal biographer has blasted Meghan, Duchess of Sussex, over new revelations about the Royal family she made in an interview with The Cut.

In her bombshell interview with The Cut – part of New York magazine – the Duchess of Sussex launched a fresh salvo of attacks on the royals, Britain and the press.

Among other claims that will horrify courtiers, Meghan insisted that what she and Harry asked for during Megxit negotiations was not ‘reinventing the wheel’ as she moaned that other senior royals had been granted similar arrangements.

The article also heard from Harry who suggested some members of the Royal Family ‘aren’t able to work and live together’, and referred to his wife as a ‘model and a mom’.

Angela Levin, author of ‘Harry: Conversations with the Prince’, appeared on GB News and described the duchess’s ‘arrogance’ as ‘breathtaking’.

She said: ‘It’s breathtaking – her arrogance, her rudeness and her taking everything for granted and not giving anything back attitude. I think it’s too shocking.

‘I thought what she looked like was not at all attractive.

‘It was all angry and powerful and a “don’t do anything to me otherwise you will suffer” sort of look.

‘And I think it’s a tragedy that she has convinced Harry that his family is so awful. When you mentioned they saw the Queen at the Jubilee, it was only for 15 minutes because she was extremely busy… they could have come another time.

‘And now, to say they won’t go up and see her [at Balmoral] is spiteful in my view.

‘Because it’s not dangerous up there, there’s nothing to see for miles so he doesn’t need protection 24/7.

‘She will fight on to the end and some people might admire that and in some situations, it’s absolutely ideal, but I don’t think you do that with family.’

The magazine revealed various features of the property – including the two connected palm trees in the garden, which the Duke of Sussex (pictured right at his home), 37, refers to as himself and Meghan – with even their son, three, calling ‘Hi, Momma. Hi, Papa’ whenever he passes them

One of the most notable moments in the interview in The Cut came as Meghan was discussing the bitter fallout from their Oprah interview.

According to writer Alison P. Davies, Meghan said: ‘Harry said to me, ”I lost my dad in this process”. It doesn’t have to be the same for them as it was for me, but that’s his decision.’

The duchess’s friend and unofficial spokesman Omid Scobie later clarified that she was in fact referring to her own father and not Prince Harry’s relationship with the Prince of Wales.

Elsewhere in the piece, Meghan suggested she was returning to Instagram after quitting all her social media following her wedding to Harry in 2018. However, Davies added that she would ‘later relay’ that ‘she was no longer sure’ about doing so.

The interview contained its fair share of eyebrow-raising moments, including Meghan recalling how a South African cast member of the Lion King film told her ‘they rejoiced in the streets the same we did when Mandela was freed from prison’ when she married Harry.

At another stage in the conversation, Meghan – a duchess – suggested people still viewed her as a ‘princess’ despite stepping down as a senior royal.

In a new interview published today with The Cut, the Duchess of Sussex, 41, shared how her home in Southern California (pictured) makes her ‘feel free’ and is ‘calm and healing’

She said: ‘It’s important to be thoughtful about it because — even with the interview, I was conscious of the fact that there are little girls that I meet and they’re just like, ”Oh my God, it’s a real-life princess”.’

At another point Davies wrote: ‘[…]instead of answering a question, she will suggest how I might transcribe the noises she’s making: ‘She’s making these guttural sounds, and I can’t quite articulate what it is she’s feeling in that moment because she has no word for it; she’s just moaning’), at this stage, post-royal, there’s no need for her to hold back.’

The article was released after it was claimed Harry and Meghan will not visit the Queen at Balmoral when they visit Britain next week amid an ongoing security row, and just days after Meghan used her new Spotify podcast to complain how she had to continue engagements on a royal tour in South Africa after a fire in Archie’s bedroom.

In addition, the interview saw Meghan:

‘Upsetting the dynamic of the Royal Family’

Meghan said that she and Prince Harry were ‘happy’ to leave Britain and were ‘upsetting the dynamic of the hierarchy… just by existing’ before they stepped down as frontline royals and moved to North America.

The Cut reported today that 41-year-old Meghan listed a ‘handful of princes and princesses and dukes who have the very arrangement they wanted’, although none of these royals are named in the article.

Harry and Meghan’s visit to the UK and Germany

And Meghan, speaking to New York-based features writer Allison P Davis, said: ‘That, for whatever reason, is not something that we were allowed to do, even though several other members of the family do that exact thing.’

The article states that Harry and Meghan suggested to ‘The Firm’ that they should be allowed to work on behalf of the monarchy but make their own money, with the Duchess saying: ‘Then maybe all the noise would stop.’

The article says: ‘They also thought it best to leave the U.K. (and the U.K. press) to do it. They were willing to go to basically any commonwealth, Canada, New Zealand, South Africa, anywhere.

”Anything to just … because just by existing, we were upsetting the dynamic of the hierarchy. So we go, ‘Okay, fine, let’s get out of here. Happy to,’ ‘ she says, putting her hands up in mock defeat.

‘Meghan asserts that what they were asking for wasn’t ‘reinventing the wheel’ and lists a handful of princes and princesses and dukes who have the very arrangement they wanted.

”That, for whatever reason, is not something that we were allowed to do, even though several other members of the family do that exact thing.’

Meghan says she has made an ‘active effort’ to ‘forgive’

The Duchess was asked during the interview whether forgiveness can exist between her and her own family as well as members of the Royal Family.

The Duke and Duchess of Sussex at the Service of Thanksgiving at St Paul’s Cathedral in London on June 3, on their last visit

She told The Cut: ‘I think forgiveness is really important. It takes a lot more energy to not forgive. But it takes a lot of effort to forgive. I’ve really made an active effort, especially knowing that I can say anything.’

The report said that Meghan discussed how two families had been ‘torn apart’.

And it quotes Meghan as saying: ‘Harry said to me, ‘I lost my dad in this process.’ It doesn’t have to be the same for them as it was for me, but that’s his decision.’

The Duchess says towards the end of interview that she has ‘never had to sign anything that restricts me from talking’.

She also says: ‘I can talk about my whole experience and make a choice not to.’

The interviewer then asks Meghan why she does not talk, and she replies: ‘Still healing,’.

Harry says ‘many’ of his family ‘can’t work together’

Harry and Meghan run Archewell from their shared home office at their mansion in Montecito, California.

The article in The Cut refers to them having ‘two plush club chairs placed side by side behind a single desk, facing into the room like thrones’.

And it quotes Harry as saying: ‘Most people that I know and many of my family, they aren’t able to work and live together,’

The article also refers to him enunciating the word family ‘with a vocal eye roll’.

Harry added: ‘It’s actually really weird because it’d seem like a lot of pressure. But it just feels natural and normal.’

It comes after a royal expert said today that Harry and Meghan are very unlikely to visit the Queen at Balmoral when they return to Britain for a trip next week, and warned that the ‘family rift is getting worse, not better’.

The Sussexes have an ongoing row about their security with the Home Office – and tensions with the Royal Family have been deepened by mounting concerns over what will be published in Harry’s upcoming biography.

These issues will no doubt worsen after Meghan’s latest comments published in The Cut today, in addition to her making veiled criticisms of the family in her new Spotify podcast released last week.

Royal expert Phil Dampier told MailOnline today that he would be ‘very surprised’ if the Sussexes visit the Queen at Balmoral, where she is likely to remain for the next few weeks as concerns grow over her mobility issues.

He added that there is little ‘goodwill on both sides’ and that the royals will be ‘wary’ of Harry amid what could be in his book. Mr Dampier also said that a ‘visit to Scotland would create awkward family tensions for everyone’.