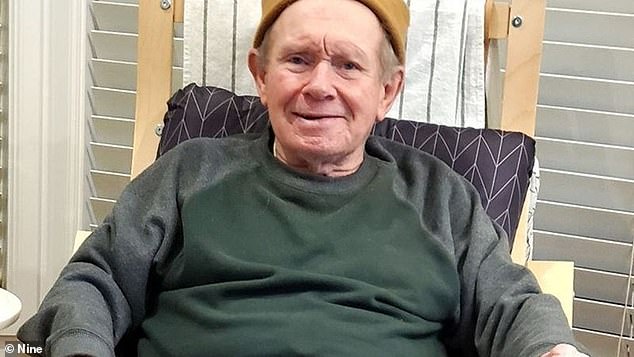 
EXCLUSIVE: Tragic twist as Alzheimer’s sufferer dies in hospital after he went missing for four days but was found stuck in a tree – and his precious last moments with his wife

An elderly man who was found stuck in a tree after four days missing in the bush has tragically died in hospital.

Ronald Weaver, 79, was reported missing in Wahroonga on Sydney‘s north shore on December 27, triggering an urgent search and an emotional appeal from his wife.

Mr Weaver was stuck found in a fork of a tree at about 11.30am on December 30 only a few hundred metres from the local State Emergency Service headquarters in North Wahroonga.

Mr Weaver was freed from the tree trunk and treated by paramedics before being taken to Sydney’s Royal North Shore Hospital.

He was severely dehydrated after spending four days in rough terrain, and as a result, suffered from serious kidney issues.

Ronald Weaver (pictured), 79, has tragically died in hospital, days after being miraculously found after four days in dense bushland in Wahroonga

Mr Weaver was found in a fork of a tree at about 11.30am on December 30 only a few hundred metres from his local SES headquarters near North Wahroonga (pictured)

Sadly, Mr Weaver later succumbed to health issues, dying in hospital on January 1. He was laid to rest at the Macquarie Park cemetery on Friday.

Following the rescue of her late husband, Mrs Weaver told media he was not in a good condition.

‘Ron is not well but he is in the best place,’ Mrs Weaver said.

‘Ron is a very smart person, he was a very good memory and he is very frustrated he has dementia now.

‘You know I’m 60 plus but I just jumped up like a little girl (when he was found).

‘I just saw so many people work together to find Ron… I really appreciate it, I don’t know how to express it in words.’

He was found severely dehydrated after spending four days in rough terrain, and as a result suffered from serious kidney issues

DECEMBER 27: Ronald Weaver disappears in Wahroonga in Sydney’s north after leaving his home in Woolcott Avenue. An SES search was launched to find the missing 79-year-old

DECEMBER 30: Mr Weaver is found in a fork of a tree around 11.30am only a few hundred metres from his local SES headquarters near North Wahroonga.  He was taken to Royal North Shore hospital