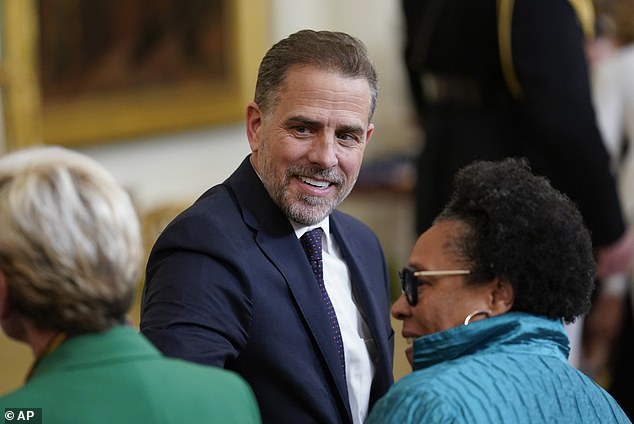 The Wisconsin Republican told Fox & Friends that he has ‘no faith’ in FBI Director Christopher Wray, who was appointed by Donald Trump, to oversee anything related to President Joe Biden’s son.

It comes after Johnson wrote a letter to Wray, Attorney General Merrick Garland and other Justice Department officials on Tuesday claiming to have received whistleblower allegations that the bureau went out of its way to ‘improperly discredit negative Hunter Biden information as disinformation’ in a bid to stop investigations into the president’s son.

‘First of all, thank God for those whistleblowers. We need a whole lot more of them in the FBI, the Department of Justice, and in our federal health agencies,’ Johnson said on Sunday.

‘I’m not shocked, but it’s outrageous that the FBI would be tipping the scales of justice the way they’re doing.’

He continued, ‘I have no faith in Christopher Wray of conducting this investigation, but it’s important that the American public understand the FBI had Hunter Biden’s laptop in December of 2019. They certainly saw the evidence of what I think is that criminal activity on that laptop.’

Johnson accused the FBI of having ‘done nothing’ with the supposed evidence.

‘Here we are in the end of July, early August 2022. What have they done with it?’ the senator posed.

‘No, you can’t you can’t trust this Department of Justice, the FBI, to get to the bottom of this.’

It follows a Monday letter from Senator Chuck Grassley demanding the agencies answer similar claims on Hunter Biden in the lead up to the 2020 election.

‘The information provided to my office involves concerns about the FBI’s receipt and use of derogatory information relating to Hunter Biden, and the FBI’s false portrayal of acquired evidence as disinformation,’ Grassley wrote to Wray and Garland.

‘The volume and consistency of these allegations substantiate their credibility and necessitate this letter,’ he noted.

Grassley, the ranking member on the Senate Judiciary Committee which oversees the agencies, says the whistleblower alleges that was a ‘scheme’ among some FBI officials to ‘undermine derogatory information connected to Hunter’ by falsely flagging it as disinformation.

And, he claims, this all happened in the lead up to the 2020 presidential election.

In October 2020, one month before the election, ‘an avenue of derogatory Hunter Biden reporting was ordered closed’ by a senior FBI agent at the bureau’s Washington Field office, Grassley claims.

‘[T]he allegations provided to my office appear to indicate that there was a scheme in place among certain FBI officials to undermine derogatory information connected to Hunter Biden by falsely suggesting it was disinformation,’ Grassley wrote.

His letter came after revelations last week that the federal investigation into Hunter Biden reached a ‘critical juncture’ and investigators are weighing whether to charge the president’s son.

The Department of Justice probe in Delaware has intensified in recent weeks over whether to bring charges on tax violations or making false statements on purchasing a gun, sources told CNN.

Hunter would have been prohibited from buying a gun at the time because of his well-documented struggles with drug addiction.

He revealed after the 2020 election that he was being investigated on tax issues but denied any wrong doing.

Donald Trump tried to make Hunter Biden’s business dealings an issue in the 2020 election – a charge that pleased his supporters at campaign rallies but failed to stop Biden from winning the presidency.

President Biden has denied any knowledge of his son’s business dealings and the White House has said they will stay out of any Justice Department investigations involving Hunter.

Republicans are expected to probe Hunter’s business deals if they retake control of Congress in the November midterm election.

David Weiss, the U.S. Attorney in Delaware, is leading the federal probe, which dates back to as early as 2018. President Biden kept Weiss on after Trump left office to continue the investigation.

Hunter has not been charged with any crimes and has denied criminal wrongdoing.

The FBI and IRS’ criminal division are among the agencies who have been involved in moving the investigations, and there have also been discussions over whether his past drug abuse could weaken their case, CNN reported.

Hunter could argue that he wasn’t aware of his actions because he was high on drugs.

The probe is a political hot potato for Attorney General Merrick Garland.

The Justice Department has an unwritten rule to avoid bringing politically sensitive cases within 60 days of an election, officials have noted.

But Garland would faces charges of Democratic favoritism if he holds back on Hunter with some officials arguing that rule doesn’t apply since Joe Biden’s name isn’t on the midterm ballot, which determines which party controls Congress.

Among them was Hunter’s drug use. Pictured: Hunter with a crack pipe in his mouth

Earlier this summer, DailyMail.com revealed a 2018 voicemail recording from the junior Biden’s hard drive stating the president did know about the dealings.

Joe Biden called Hunter on December 12, 2018, saying that he wanted to talk to him after reading a New York Times story about Hunter’s dealings with the Chinese oil giant CEFC.

During a July 5 White House press briefing, Biden’s spokesperson Karine Jean-Pierre refused to comment on the voicemail to reporters.

‘From this podium, I am not going to talk about alleged materials from the laptop,’ Jean-Pierre repeatedly shot back when asked.

When further pushed on the contents of voicemail and if the administration is being open with the American people, she said, ‘I cannot comment on any materials from the laptop.’

Files on Hunter’s abandoned laptop previously disclosed and verified by DailyMail.com show that he struck a deal with the Chinese company worth millions of dollars after touting his family connections.

The Times’ 2018 story pointed out CEFC chairman Ye Jianming had been arrested in China and his top lieutenant, Patrick Ho, had been convicted in the US for bribing African officials to help Iran evade oil sanctions.

It revealed that Ye had met with Hunter at a Miami hotel in 2017 to discuss ‘a partnership to invest in American infrastructure and energy deals.’

The Times reported that when Ho was arrested, he called Joe’s brother Jim Biden – who told the newspaper that he believed the call was meant for Hunter.

The Gray Lady said it was ‘unclear whether Hunter Biden struck any business deals with CEFC’, not knowing at the time the depths of his connections with his Chinese business partners.

After seeing the story online, Joe called Hunter and left a voicemail.

‘I thought the article released online, it’s going to be printed tomorrow in the Times, was good. I think you’re clear. And anyway if you get a chance give me a call, I love you.’